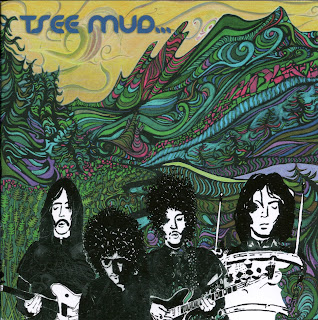 Venezuelan fuzz-rock outfit Tsee Mud was the brainchild of guitarist José Romero, who made his name in the 1960s playing in local bands like LSD and Bacro (whose meager output of recorded music is all included in this compilation) and in the US by a stint with the Del-Vikings. Romero was heavily influenced by the guitar gods of his day, namely Jimi Hendrix and Cream-era Eric Clapton, and those influences are all over this disc. It’s easy to forget—at least for Americans—that the cultural inventiveness and upheaval of the era spread far beyond the Anglo-American sphere, but Tsee Mud and Romero’s other projects provide ample evidence that the gospel of rock spread deep into Latin America, long before the internet made everything ubiquitous.
The songs on this collection are taken from all three of Romero’s Venezuelan projects. LSD was the first of the lot, and the tunes reflect plenty of Hendrix influence, both in the syrupy guitar tone and the languid vocals. The songs aren’t bad musically, with “When I Was a Boy” offering a nice scratchy guitar tone, and “One Day to the Week” working plenty of fuzz into the mix. Both songs are let down by weak vocals, however. No singer is specified in the liner notes, so presumably this is Romero’s voice, and he just isn’t up to the task of battling with the raging guitars and relentless rhythm section. Especially on “One Day to the Week,” his yelps of “Save me baby!” come off as comical more than anything else.
The five tunes from Romero’s last band, Bacro, avoid this particular pitfall by simply dispensing with vocals altogether. This wasn’t by choice; according to the excellent, extensive liner notes, the newly-formed bands simply hadn’t located a suitable singer by the time they recoreded these basic tracks, and so they have remained unreleased until now. Nonetheless, they are solid and sometimes excellent. “I Am a Happy Man” is a particular standout, with its chugging rhythm and dexterous fretwork. “Down with the War” is nearly as engaging.
Probably the most complete songs here, in terms of both composition and production, are the four tracks from Tsee Mud. With Jesus Toro recruited for vocals this time, the songs are (slightly) less derivative and more commanding, while the ensemble playing is stronger than anything else here. Romero shreds nicely on both “Amandote Esta Dios” and “What’s the Matter with You Jane?” while “Mundo” provides the strongest vocal performance on the entire album.
As mentioned above, the liner notes are thorough, with a 16-page booklet providing background info which (in both English and Spanish) crucial to understanding these long-obscure bands. Plenty of photos liven up the presentation too. Enrique Rivas Viniegra’s appreciative essay waxes a little breathless at times, but given that none of these tracks has ever seen a CD release before, his enthusiasm can be forgiven. The amount of background he has dredged up on Romero and his work is impressive.
There is little enough on this album that hasn’t been done many times over, usually by more famous performers than these. But for fans of the genre, or of the era, or of the geographical location, this latest Shadoks Music release makes for an intriguing little package. It’s far from crucial, but engaging nevertheless.
1. When I Was A Boy [LSD] (2:45)2. Amandote Esta Dios [Tsee Mud] (5:07)3. What's The Matter With You Jane [Tsee Mud] (3:07)4. I Am A Happy Man [Bacro] (4:48)5. If You Want To Be Aliue [Bacro] (5:06)6. One Day To The Week [LSD] (3:27)7. Down With The War [Bacro] (4:17)8. This Natural Place [Tsee Mud] (4:30)9. Mundo [Tsee Mud] (2:46)10. Odelin [Bacro] (4:08)11. Show Me [Tsee Mud] (3:47) 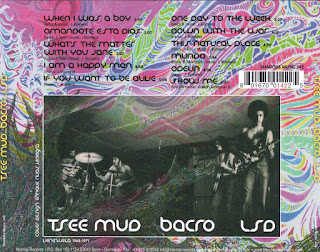 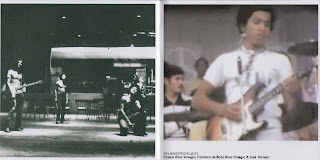