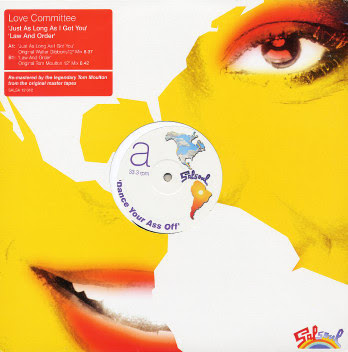 Tracklist
A Just As Long As I Got You (Original Walter Gibbons 12″ Mix) 8:40
Mixed By – Walter Gibbons
Written-By – Bruce Gray, Ron Tyson, T.G. Conway
B Law And Order (Original Tom Moulton 12″ Mix) 8:44
Mixed By – Tom Moulton
Producer – Earl Young, Norman Harris, Ron Baker
Written-By – Allan Felder, Norman Harris, Ron Tyson
Another fantastic band from Philadelphia who, like many other artists, have tried their hand at making some, three in their case, great disco hits. Two are the subject of this post which you can find in different versions in the 1993 reissue of their first 1978 album Law And Order (https://www.discogs.com/it/Love-Committee-Law-And-Order/ release / 1365381) along with another anthem titled Where Will It End.
The Funk / Soul includes at least 2,000 immortal songs and all the ones I'm posting here are worthy part of it!
Enjoy!
rawkin' dog