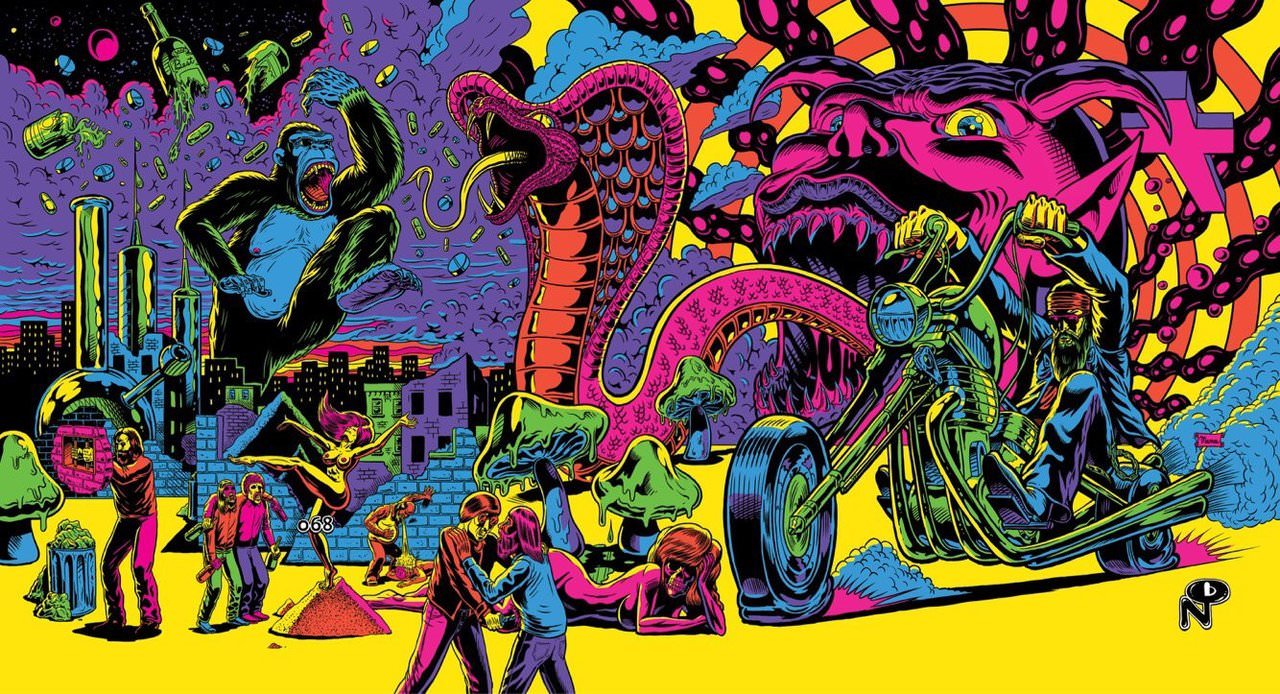 Fifty years ago, the much-vaunted but short-lived Summer of Love burned out nearly as fast as it began, and the Sixties began its death march toward Cielo Drive and Altamont Speedway. Choked out by lethal doses of greed and drugs, groovy-baby, flower-in-your-hair psychedelia quickly gave way to bad trips and endless bummers, speed freaks and acid burnouts. The sounds of an era roiled by perpetual tumult and social upheaval transformed and mutated as well, into something harder-edged, more sinister; less It’s A Beautiful Day and Scott McKenzie, more Blue Cheer and Black Sabbath. And while Alice Cooper has claimed responsibility for his group “driving a stake through the heart of the Love Generation,” the bands represented on the Numero Group’s new compilation Acid Nightmares show that his namesake act were but one link in a worldwide network of accomplices, and that sonically speaking, the Hippie movement died a death of a thousand cuts.
The second in the Warfaring Strangers series, Acid Nightmares brings together eighteen late ‘60’s-early ‘70’s tales of the euphoria and the mania offered and afforded by various liquids, pills, and powders. Raw and gritty, all fuzztones and feedback, it’s no-fooling OG stoner rock, handcrafted by first-generation stoners. Fans of every era of biker, sludge, acid, and/or garage rock will find a smorgasbord of distorted riffs and styles to sink their teeth into; from Xarhanga’s title track that goes from Sir Lord Baltimore to The Crazy World of Arthur Brown to Black Sabbath and back again in a shade under four minutes, to the Jesus and Mary Chain-meets-Blue Öyster Cult vibe of Whistlers Mother’s “Dark Dawn;” from the Detroit via Tennessee riffing of TNS’ “Times Up” to the fuzzy strut-and-shimmy of The Shy Guys’ “Black Lightning Light.” The cocksure swagger of Mass Temper’s “Grave Digger” belies a definite Led Zeppelin influence, with its stacked guitars and singer Bo Pittman’s convincing take on Robert Plant, while Gift vocalist Helmuth Treichel manages to sound simultaneously like Ian Gillan and David Coverdale on “Drugs.” “Hooked” by Bulbous Creation is a kneeling junkie’s plea, “Down by the River” meets “Cocaine Blues” dripping with enough angst and self-loathing to fuel ten crappy nu-metal acts. “Dead Drunk Screamin” by Indiana’s Goliath comes off like Montrose with bad intentions, and North Carolina heavy psych act Sunn Cycle’s “Acid Raga” closes the album in a swirl of pungent, multicolored smoke.
Since 2003, the Numero Group has specialized in finding and documenting the very best in independent music of all genres that had largely been lost to time, from local bands and scenes and regional labels that were unable to reach the next plateau of success. It’s a vital and important mission they’ve undertaken, and each of their releases tells a fascinating chapter in an endless story. For my money, they’re the best in the world at it; I’ve yet to be disappointed by anything I’ve heard that carries the Numero imprint, and Acid Nightmarescertainly continues that trend. It’s an amazing snapshot of the era, it’s the gnarliest mixtape your hesher uncle never made you. If you’re a fan of tripped-out proto-metal or good ol’ scuzzbucket guitar rock and roll, I can’t recommend it highly enough.