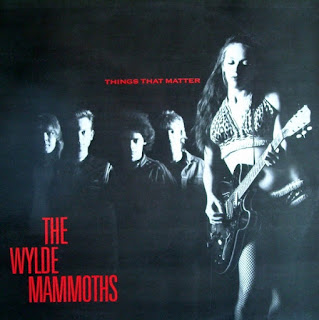 The greatest masterpieces of the garage rock of the second half of the eighties, for me perhaps the best period of all time for this kind of music, all come from the "suburbs" of rock and are the first album of Italians Sick Rose, Faces (1986), and 3 Swedish album, the first album by The Creeps, Enjoy The Creeps (1986), the first of The Stomach Mouths (http://bordeldorock.blogspot.it/2017/08/stomach-mouths-something-weird-1986 .html), Something Weird (1986) and this second album by The Wylde Mammoths, Things That Matter of 1988 which, after Go Baby Go !! 1987, excellent work, have drawn this cornerstone of rock music.

14 garage songs of rare beauty, 10 originals all of the singer, guitarist and harmonica player Peter Maniette and 4 covers chosen with undoubted taste and performed as the God garage commands!
I own all the vinyls from the Pebbles, Highs In The Mid Sixties and Back From The Grave series and I can assure you that Peter Maniette's hymns are fresher and more beautiful than most, about, 1.000 that compose the aforementioned compilations.
I hope no one thinks of re-mastering this jewel, because, unfortunately, even the CD reissues of the "Garage Nation" almost always overwhelm the sounds and therefore the musical philosophy of the authors.
These mammoths are truly overwhelming ... like the animals that inspired their name!