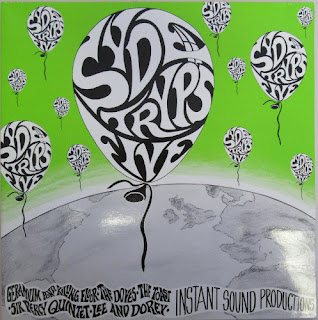 Volume five of the Syde Tryps series, 14 songs, 1,000 numbered copies, is subtitled John Edward's Instant Sound Productions.
They are all true rarities, even the 3 songs of the only band known to fans, Killing Floor, are slightly different from the versions on their second album Out Of The Uranus, which was always produced by John Edward.
Dogs In Baskets by Geranium Pond was included in Pebbles Vol. 20 The Continent Lashes Back! European Garage Rock Part 4 of 1986 (which sooner or later will be subject to post) and recently reappeared in Let's Go Down And Blow Our Minds: The British Psychedelic Sounds Of 1967 of 2016, where they have exhumed ... also another song present in this volume, Smokeytime Springtime by The Doves

There are 4 unpublished works of Geranium Pond,  including No Elephants In My Garden which is truly of a stratospheric beauty, two unreleased of The Toast, one of The Doves , one by Lee And Dorey and a song released in 1970 only on 7 " by Sir Percy Quintet. The quality is very good except for some passages of some songs, maybe acetates, but these rediscovery of the Tenth Planet are really valuable.
Also great is Lincoln's Rocking Chair by The Toast,  but they are all works that could be included in the Rubble series, maybe in the non-remastered one, which I own, released in 1992 for Bam-Caruso which sounds great.

Really recommended to everyone!