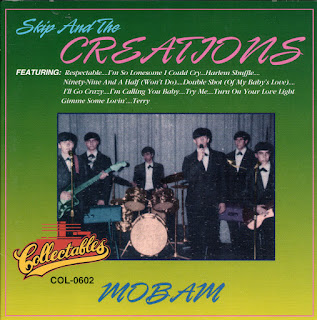 Practically nothing is known about Skip And The Creations, apart from the fact that they were a sextet, that their first names were Walter, Brute, Jeffrey, Skip, Rick, and Tommy, and that Skip was their lead singer, Jeffrey was the lead guitarist, Walter may have been the organist, and Brute played a Fender-model bass.

Skip And The Creations cut their Justice Records LP in 1967 (Justice 152) and disappeared sometime after that.

The album is Garage Frat-Rock of the Soulful sort - covers include Bob & Earl's "Harlem Shuffle", Wilson Pickett's "Ninety-Nine and A Half", The Swingin' Medallions's "Double Shot" and "Deadric Malone", Joseph Scott's "Turn On Your Lovelight", The Isley Brothers' "Respectable", The Spencer Davis Group's "Gimme Some Lovin', Hank Williams’ "I'm So Lonesome I Could Cry".

Skip And The Creations seemed bent on becoming Virginia's answer to The Outsiders.

These boys really tried hard, mixing R&B and gospel influences in a surprisingly effective fashion, and their concert performances must have been awesome in the context of the times.

Their cover of "Double Shot" was no threat to The Swingin' Medallions, nor was their "Respectable" going to make The Outsiders worry about losing gigs - but even here, Skip And The Creations did sing and play with a demented, soulful snarl that makes their work entertaining and animated, and puts these performances over. 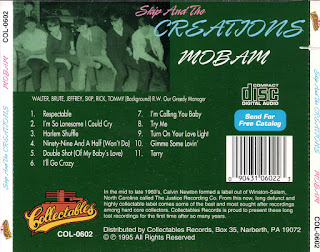