Fronted by journalist/author/wild child Mick Farren, the Deviants spawned that reality. Over the years, three ex-members would become Pink Fairies; for subsequent reunions, sundry ex-Fairies would become honorary Deviants. And though only Russell Hunter is present on Ptooff!, still you can hear the groundwork being laid. the Pink Fairies might well have been the most perfect British band of the early '70s, and the Deviants were their dysfunctional parents.

In truth, Ptooff! sounds nowhere near as frightening today as it was the first (or even 21st) time out; too many reissues, most of them now as scarce as the original independently released disc, have dulled its effect, and besides, the group's own subsequent albums make this one look like a puppy dog. But the deranged psilocybic rewrite of "Gloria" which opens the album, "I'm Coming Home," still sets a frightening scene, a world in which Top 40 pop itself is horribly skewed, and the sound of the Deviants grinding out their misshapen R&B classics is the last sound you will hear.

Move on to "Garbage," and though the Deviants' debt to both period Zappa and Fugs is unmistakable, still there's a purity to the paranoia. Ptoof! was conceived at a time when there genuinely was a generation gap, and hippies were a legitimate target for any right-wing bully boy with a policeman's hat and a truncheon. IT and Oz, the two underground magazines which did most to support the Deviants (Farren wrote for both), were both publicly busted during the band's lifespan, and that fear permeates this disc; fear, and vicious defiance. It would be two years, and two more albums, before the Deviants finally published their manifesto in all its lusty glory -- "we are the people who pervert your children" -- during their eponymous third album's "People Suite." But already, the intention was there.
1. Opening (S. Bishop, M. Farren, R. Hunter, C. Rees, S. Sparks) - 0:082. I'm Coming Home (Sid Bishop, Mick Farren, Russell Hunter) - 5:593. Child Of The Sky (Farren, C. Rees, Hammond) - 4:324. Charlie (Sid Bishop, Mick Farren) - 3:565. Nothing Man (M. Farren, Moore) - 4:216. Garbage (Sid Bishop, Mick Farren, Russell Hunter) - 5:367. Bun (Cord Rees) - 2:428. Deviation Street (Mick Farren) - 9:01 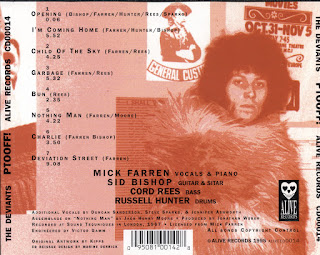