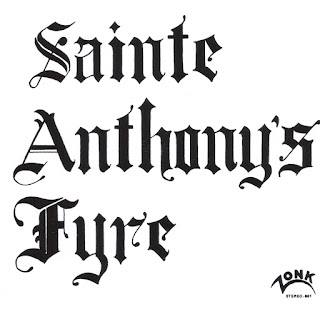 In 1969 SAINTE ANTHONY'S FYRE was the ultimate hardrock powertrio from Trenton, New Jersey. Band leader, guitar wiz and vocalist Greg Ohm was heavy into music since childhood, having played classical music in elementary and high school (1st violin Trenton High’s Orchestra). He also took some music classes in college and ended up with the group Peter's Precious Soul, who were very popular locally. But Greg grew tired of playing Top 40 cover songs and decided to start his own band.

While cleaning his grandmother's attic one day in 1967 he found an old newspaper with the headline, "Ste. Anthony's Fyre Strikes French Town." A wheat crop had developed ergot, which is a fungus disease that affects rye and other plants, and was contaminated. The wheat was used to make bread and sent the whole town on an LSD-like trip that lasted nearly three weeks. This was the perfect name for the group Greg had in mind and thus Sainte Anthony's Fyre was born.

Greg recruited two skilled local musicians, and friends of his; Tom Nardi (previously in the bubblegum band Marshmallow Way) on bass and vocals and Bobb Sharples on drums. In 1968 they started rehearsing in the cellar of a boutique in downtown Trenton called the Hip-Pocket. Greg was extremely innovative and played weird positions, inverted chords, and off-key tuning on his customized Gibson Firebird guitar.

He would only use Marshall’s, three 100-watt heads with six cabinets. Greg also considered himself a fashion plate and always wore a grey felt cowboy hat, a scarf tied around his left knee, and bedroom slippers when he played. Tom used a Sunn 2000S with four 15'' JBLs, four Sunn 412S cabinets with two Sunn Sorado heads, one Sorado head with a 610 cabinet, and one 15'' cabinet, to blow eardrums left and right. He also sported a cartridge belt around his waist. Bobbie always had a double bass drum set. This was a real power trio.

One of the owners of the Hip-Pocket and his business partner decided to manage the band and used the profit from the clothing store to promote them. They started Zonk Productions and managed to get Sainte Anthony’s Fyre booked as an opening act for bands like MC5, Wishbone Ash, Grass Roots, Rare Earth, Fleetwood Mac, and Joe Cocker.

About this time they met a black promoter named Dickie Diamond who wanted to bankroll them. He said he knew everyone and would take care of everything. He was putting on shows with black acts and had the band opening for them. They also had to fill in as backup players for an impressive rooster of artists like James Brown, Jackie Wilson, the Coasters, the Drifters, the Four Tops, Kool and the Gang and others!

As Sainte Anthony’s Fyre’s fan base grew Zonk Productions decided it was time to put out an album. It was recorded around the end of 1969 in a studio in Pennsauken, New Jersey which was run by the bass player from the Lovin' Spoonful. Unfortunately he had no idea how to record this loud bunch.

They refused to go directly into the board or use small amps so the sound board kept blowing up. Then finally they just set the amps up facing the back wall and hung two microphones on the far wall. They did some overdubbing at Nise Studios in Philadelphia and after mixing, the tapes were sent to Motown for pressing, who according to the band totally screwed it up. United Artists then pressed about 1000 copies of the Zonk. Because the record was an independent release no radio stations would play it.

In the meantime Dickie had some crazy schemes going. He wanted to put them on tour as Led Zeppelin (he called them "Zefflin"), he said no one would figure it out because Zeppelin was from England and nobody knew what they looked like. He also started booking shows, selling the tickets, and then canceling the shows. Nobody knew what they were doing but Dickie said he would make it up to the band. So he got some time at Electric Lady Studio in New York to re-record the album in January 1971. But before Chris. Ultimate wasted slimy speed freak vortex of polluted psychedelic hard rock from the greasy wasteland of inner city Jersey.

The most wicked manic garage power trio to end them all. Raw gnarly drugged guitar, cavernous bass, drums beat to a pulp and psychotic vocals. Beyond early Blue Cheer, this record is so wasted, toxic and heavy! One look at the pictures will tell you how they sound. A highly sought after collector piece. 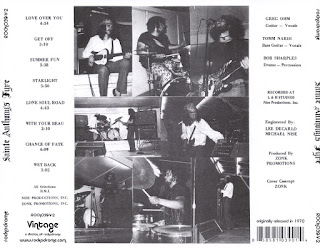