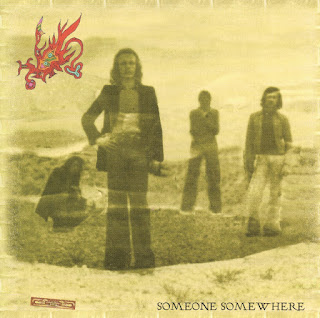 Acanthe was a French Classic Rock/Prog band in activity in the mid 70’s (from 73 to 77), but that has never seen its music reflected on a official release. For obscure reasons, this band was never given the effective opportunity to see its work properly published.

Well, more than 30 years after their disbanding, the merits of the band have been finally recognized (and assembled) by homeland label Musea, which continues a long tradition of recovering some of the long lost, rare and unsigned progressive rock bands of that period in time.

The first set of conclusions a listener can take while listening to Someone Somewhere is that it seems really strange that this band has never had its work released while in activity, as the band shows composure and talent that goes way beyond many of the indeed signed bands from that time. It becomes then inevitable for the listener to ask himself how many more bands with (at least, if not more) this quality have been lost in time, with no chance of seeing their work (finally) recognized.

Acanthe played a sound that circled around the classic rock and the symphonic prog. A sound that can be reviewed with references to such apart names as Pink Floyd, Ange, Pulsar, The Doors and Procol Harum while maintaining an original signature.

The music here is dynamic and full of personality, with emphasis on the instrumental parts (some come very close to brilliant). Singing in both French and English, the band is always capable of delivering good melodies and good vocal work in both languages.

The overall sound, though obviously framed within the time window where it was first recorded, it does not sound as dated as the majority of the recordings from the same period. This said, despite distinctively vintage, this is an album that can still be tremendously enjoyable by the contemporary community of progheads that still feed from the 70’s musical legacy.

Someone Somewhere has many ingredients in what concerns its musicality: keyboards that sound like The Doors and Procol Harum, guitar work more close to Pink Floyd and a rhythm section that seems closer to Genesis or fellow French legends Ange.

This results on a joyful album to be discovered by the nostalgic fans of the classic sympho prog. In fact, this miraculous release becomes essential to those who still prefer the real deal progressive (70’s bands) to that faction of contemporary bands that prefer to emulate that style, therefore becoming regressive.

An album to be discovered and fully appreciated by the die-hard 70’s prog rock fans! (by prognosis.com). 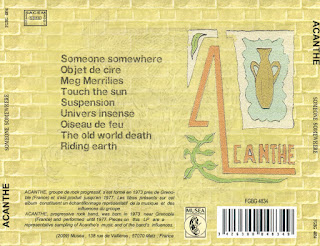