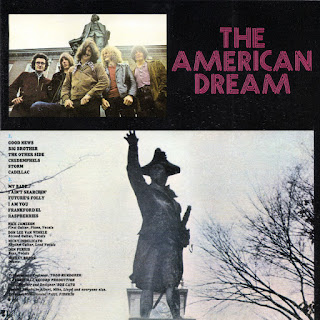 Originally known as The Great American Dream, this Philadelphian quintet were local legends who’d opened for The Who, Jefferson Airplane, Santana and many others.

Packed with snappy songs and infectious good humor, their sole album was taped in New York’s just-opened Record Plant in the fall of 1969, and marked Todd Rundgren’s debut as producer.

Issued in February 1970, it stands as one of the best pop-rock albums of its time, and makes its long-overdue CD debut here.

Key influences are not a surprise, as listeners may hear strands of Crosby Stills Nash and Young, the Nazz, and the Beatles.

The playing is full of youthful energy and the band manages to balance out hard rockers with attractive folk-rock power ballads.

Raspberries has a slight psychedelic hangover, as it begins with a phased drum intro and showcases some wigged out guitar playing. Other quality songs like the Other Side, Storm (full of great Beatles-like melodies), I Ain’t Searchin’ and I Am You are predominately acoustic, tastefully arranged and have some great hook laden CSNY harmonies.

Good News, a song that begins with a telephone conversation, eventually segues into some pretty country-rock harmonies. It’s a typical relationship hard rocker in which the band humorously shouts out “don’t be a jerkoff” at the end of the chorus.

The third track of the original lp is the real highlight of this very solid collection. Big Brother has classic late 60’s psych lyrics (“listen to the words he is saying, conjuring the games he is playing”) and intense early Who power chords (it really sounds like an excellent Nazz outtake) that make it a real killer and a treat for fans of British rock.

The American Dream stood out from the local crowd with their strong, exciting songwriting and 3 guitar lineup. 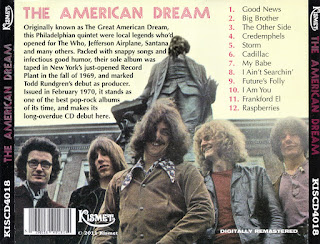