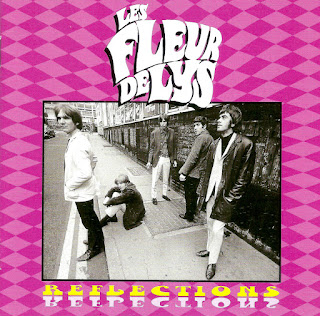 The Fleur de Lys were one of the most talented underground guitar bands of the sixties and deserve far more recognition than they have received to date. They underwent many line-up changes and their story is a complex one.

They originally formed as Les Fleur de Lys in Southampton during the Autumn of 1964. They established a small following locally, playing at youth clubs, parties and pubs, but were signed by Immediate in 1965 after being spotted at a London gig.

With a young Jimmy Page in charge of their recording sessions, the outcome was a beat version of Buddy Holly'sMoondreams. It made little impression and disillusioned, the group disintegrated, leaving Keith Guster (the only ever-present member in their various line-ups) to reform the band. Phil Sawyer had previously been in The Cheynes and Shotgun Express. With this new line-up and Page again producing, they recorded a superb version of Pete Townshend's Circles, which was notable for some fine psychedelic guitar work from Sawyer.

By now the group were known as The Fleur de Lys and they were building up a good reputation on the club circuit. Indeed The Animals' Hilton Valentine got them involved in a session he was producing with fellow Animals' recent discovery Jimi Hendrix. Two tracks were put down, one was a cover of The Impressions' Amen, but they weren't used, although Pete Sears has a copy of the recordings in his own collection.

To give the group an up-front vocalist Chris Andrews, who'd been a child actor (his roles included The Artful Dodger in the London production of 'Oliver' in 1964), was added and the group signed to Polydor in the Summer of 1966. Pete Sears left soon after to join The Sam Gopal Dream. He later went to the US West Coast and progressed through Stoneground, Silver Metre and Copperhead finally ending up in Jefferson Starship. Phil Sawyer joined the new-look Spencer Davis Group and, briefly, the group were a three-piece prior to Bryn Haworth being recruited. He'd previously played with a number of local bands in Darwin (near Blackburn), including The Mustangs, The Railroaders and The Mike Taylor Combo, but none of them made it onto vinyl. Mud In Your Eye was recorded, featuring Haworth's fine guitar work.

A chance meeting with producer/manager Frank Fenter led to the group backing young South African singer Sharon Tandy on studio and live work. As a session group they also toured Holland with Aretha Franklin, backed Isaac Hayesand recorded and album with Barney Kessel in this era. It was also Fenter who arranged for the group to embark on a new psychedelic project, Rupert's People. With friend and guitarist Rod Lynton they wrote and recorded Hold On. Lynton came up with the Procol Harum-influenced Reflections Of Charles Brown to accompany it, but only Chris Andrews liked the song so he left to continue with the Rupert's People project and the band continued as a three-piece.

They re-cut Hold On in the studio, with Sharon Tandy on vocals. They also recorded Daughter Of The Sun at the same session. Hold On figured as the 'B' side to her next single but both songs were coupled on a 1968 45.
There's no Sharon Tandy entry in this book so here's the discographical details of this line-up's involvement with her:-
The band guested on John Peel's 'Top Gear' radio programme in October 1967, along with Sharon Tandy. The Fleur de Lys performed Neighbour, Neighbour, Go Go Power and Cross Cut Saw and backed Sharon Tandy on Always Something There To Remind Me, Our Day Will Come and a belting version of Hold On.

In 1968 they started work on an album. Their next 45, Gong With The Luminous Nose, a Gordon Haskell song based on the famous nonsense rhyme of Edward Lear, came from this session, with Haskell handling the vocals. Again featuring ace guitar work from Haworth. The 'album' included many cover versions from Ray Charles to The Young Rascals, but it was never issued and the tapes have never been relocated. The group did, however, complete an album with John Bromley, backed Donnie Elbert on an album and worked with William E. Kimber on a rare and beautiful single as Waygood Ellis (which may be another pseudonym).

Gordon Haskell left the group during 1968, eventually joining King Crimson in late 1969. He also cut a solo album in 1970. The Fleur de Lys switched to Atlantic and released a Stax-style 45 Stop Crossing That Bridge. Shortly after, they released a second 45, Butchers And Bakers, under yet another pseudonym, Chocolate Frog. There was also a version by The Staccatos (which may have been The Creation in disguise), but the song wasn't too good and both versions sold poorly. They also backed Sharon Tandy on some of her 45s and a Tony and Tandy collaboration, Two Can Make It Together (Atlantic 584 262) 1969. The Fleur de Lys are credited on its 'B' side, The Bitter And The Sweet. The 'Tony' in question here was Fleur de Lys' Tony Head.

The Fleur de Lys' final 45, You're Just A Liar, penned by Haworth and Polydor songwriter Brian Potter, saw them go out on a high in a haze of hot guitar work. Haworth left and headed for America's West Coast, where he formed a band with ex-Blue Cheer member Leigh Stephens, recording an album which was never released. Former Scots Of St. James' member Graham Maitland joined the band in its final days and he was later in Five Day Rain. 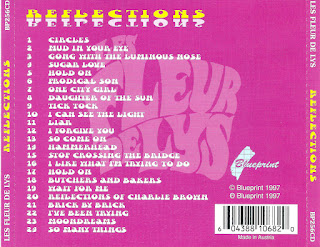 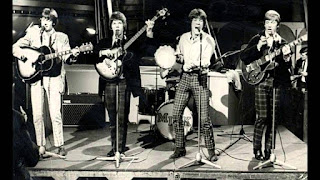