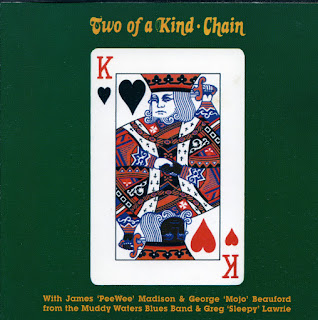 In the '73 Sunbury Festival featured Mighty Mouse, as well as a Matt Taylor "solo" slot. Phil and the two Barrys, augmented by second drummer Kevin Murphy backed Matt for this gig. On Mushroom's triple-album document of the event, The Great Australian Rock Festival Sunbury 1973, Mighty Mouse weigh in with the lengthy "Sunset Song", while Matt's set is represented by his own composition, "Brisbane To Beechworth".

He had already recorded with his Sunbury line-up (minus Murphy, but with "Sleepy" Greg Lawrie on board) for his debut solo album Straight As A Die. Also a Chain record in all but name, and showcasing Taylor's own rollicking, witty compositions, this album was a Top-20 seller and in September yielded Mushroom Records' first placing in the national Top 10 singles list, "I Remember When I Was Young" a song that, like "I'll Be Gone", "Eagle Rock" and "Most People I Know", has become a perennial 70s OzRock anthem.

With so much activity involving so many Chain alumni, it was inevitable that Mighty Mouse would evolve into yet another Chain -- by now the 15th permutation of the band!. Signing to Mushroom, this line-up issued two singles, the medium-tempo "I Thought You Weren't My Friend" (August) and the gruff shuffle-blues "I'm Gonna Miss You Babe" (November).

Neither was particularly successful, but the reconstituted group did impress on the touring circuit, appearing in March at yet another large outdoor gathering, the Down Under Rock Festival in Melbourne (again, all the usual suspects were on a bill that featured – surprise – headliners The Aztecs). During May, Chain toured the country as support to the Muddy Waters Band and soon after teamed with that band's James "Peewee" Madison (guitar, vocals) and George "Mojo" Beauford (vocals, harmonica) for recordings that would form part of Chain's next LP, Two Of A Kind.

One of Melbourne's premier "head" venues around this time, along with the T.F. Much Ballroom, was the Garrison Disco in Prahran, the venue which had served as the unofficial HQ for Madder Lake. Local council pressure forced Garrison's closure in June 1973, and as one of its most popular and regularly-performing acts, Chain was fittingly invited to be among a handful of select bands that paid tribute to the place in its final days.

Two Chain songs ("Grab A Snatch And Hold It" and "Do What You Wanna Do"), recorded live there on 7 June, appeared on the various artists' album Garrison: The Final Blow Vol. 2, along with "Roberta" by Taylor and Lawrie as a duo. Other songs recorded that evening were released in other formats: the single "I Thought You Weren't My Friend", b/w "Elephant", an edit of the extended soloing jam "How To Set Fire To An Elephant", which appeared in its full 18-minute form on Two Of A Kind. (http://www.milesago.com/artists/chain.htm)