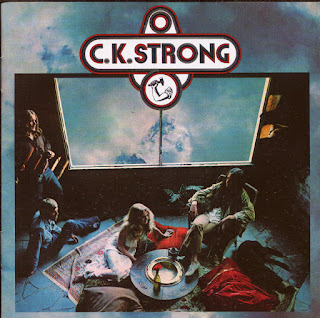 Originally this extraordinary heavy-psychedelic-blues rock album was recorded in L.A., in 1969.

The album contains 8 original cuts of 42 mins playing time, and presents the "NEW" dark, haunted and aggressive progress in electric music of the end-sixties.

The band name was a creation, to credit the two founding members, so the C (Carey) K (Kewley) Strong caravan began in the summer of 69, a bit later Geoff Westen, the second guitarist joined and the creative unit CK(W) Strong was born.

There was a big hope, that this extremely talented group will breakthrough, as the liner notes on the cover express: "Hearing is believing, but even then, you'll come away shaking your head in disbelief...everything original, everything ebullient and everything "strong" in modern-day record production.

Miss Carey is worth the price of admission, even if she didn't sing. A radiating, well-endowed blonde, her pyromagnetic caroling scans three octaves. To these ears she's at least the equal of Janis Joplin.

Our guess is that C.K. Strong will be one of the major chart acts of '69." Lynn Carey, who also contributed to the cult-soundtrack of "Valley Of The Dolls", left the group shortly before the production of the second album started, to evolve into a solo career as "Mama Lion", Jefferson Kewley later joined the Alice Cooper Band and toured also with Jerry Garcia, together with Geoff Westen both performed with Mac Davis.

Westen performed also with the underground psychedelic band, "The Other Half", but soon became owner of Oz Studios in L.A. This re-issue is carefully re-mastered and expresses freshly the natural and open sound of this amazing production, contains a bio and cool "unseen" photos from the musiciansarchives, this is a must-have album. 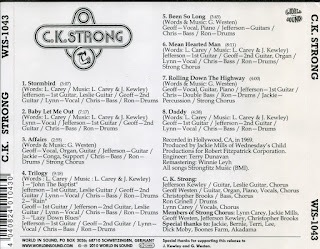