Jeff Simmons - Lucille Has Messed My Mind Up (1969 us, wonderful psychedelic/blues rock) Flac 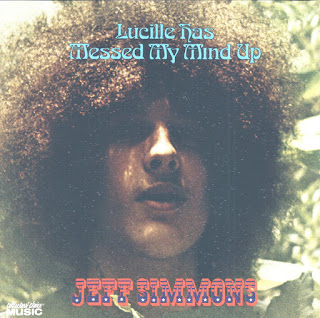 Jeff Simmons, born May 1949 in Seattle, Washington, is a rock musician and former member of Frank Zappa's Mothers of Invention. Simmons provided bass, guitar, and backing vocals for the group between 1970 and 1971. He left The Mothers just prior to the filming of 200 Motels (where he was replaced in the film by Ringo Starr's chauffeur Martin Lickert) in mid 1971. Jeff later returned to the group for a time during 1972 and 1973. Zappa and Mothers albums he appeared on include Chunga's Revenge (1970), Waka/Jawaka (1972), Roxy & Elsewhere (1974).Years later Zappa released a number of archival recordings made during this period that feature Jeff including You Can't Do That on Stage Anymore, Vol. 1 (1988), You Can't Do That on Stage Anymore, Vol. 6 (1992), and Playground Psychotics (1992). Jeff also appears in the Zappa movie The True Story Of Frank Zappa's 200 Motels (1989). Numerous Zappa bootleg recordings from the same era also feature Simmons.Jeff's music career began in Seattle. In 1967 he became a member of the local group Blues Interchange which soon changed its name to 'Easy Chair'. The group self-financed their only recording, released by the regional Vanco label in 1968. The 12" one-sided, three-song album sold well in the independent record shops along University Way NE (known locally as The Ave) in Seattle's University District. Only about 1000 copies of locally produced Easy Chair record were pressed. It is now a highly valued collectible.Easy Chair was then booked as the opening act for an August 24, 1968 concert by The Mothers of Invention at the Seattle Center Arena (renamed in 1995 to Mercer Arena.) During the sound check Easy Chair was discovered by Zappa, who recognized that the group's musical and lyrical aesthetic and sense of humor was compatible with his own.The group followed Zappa back to Los Angeles. In December 1968 Easy Chair was a supporting act for Zappa and The Mothers for 2 concerts at the Shrine Auditorium. The concerts were organized to showcase Zappa's two new record labels, Bizarre Records and Straight Records. Other artists appearing at the shows included Alice Cooper, The GTOs, and Wild Man Fischer. But Easy Chair never had the opportunity to make a record in Los Angeles. After disagreements and unexpected delays the group broke up before any recordings were made.Simmons stayed in Los Angeles and completed two solo albums for Straight. He co-composed the soundtrack for the biker film Naked Angels (1969). His second album Lucille Has Messed My Mind Up (1969), featured Zappa as producer. Zappa wrote two songs and played lead guitar under the pseudonym La Marr Bruister. The engineer was Chris Huston, who also worked on Led Zeppelin II at about the same time. Lucille was voted the 2nd best album on Straight Records by Mojo Magazine. Both albums were re-issued on CD in 2007 by World In Sound Records.Simmons is one of only a handful of musicians to share a songwriting credit with Zappa. Their collaboration Wonderful Wino appears on Lucille Has Messed My Mind Up and also on Zappa's 1976 album Zoot Allures. The title song of the album Lucille Has Messed My Mind Up was also re-recorded in a completely different arrangement on Zappa's 1979 album Joe's Garage. Simmons is also listed as co-writer (with Zappa and Napoleon Murphy Brock) on Dummy Up from Zappa's 1974 album Roxy & Elsewhere. During a 1982 guest DJ spot on UK's BBC Radio 1 Zappa played some of his favorite recordings including Simmons' song I'm In The Music Business.Jeff continued to play music with various groups in the Seattle area during the 1980s. He appeared in the 1988 movie Rock and Roll Mobster Girls which was produced on video tape in Seattle during the very early stages of the Grunge music scene. Jeff Simmons' most recent work is Blue Universe (2004).

The cult classic solo album from the long-time Mothers of Invention bassist! And, though Simmons cut this record before he officially joined the Mothers, the Zappa influence is profound; not only did this come out on Frank's Straight label, but he produced the album (under the pseudonym LaMarr Bruister) and played lead guitar. Zappa-ologists will also note that the melody to the title track was later used for 'Sharleena', and that Simmons' composition 'Wonderful Wino' was later added to the Zappa repertoire (Ian Underwood's on board, too).

But famous collaborators aside, this album is really Simmons' show, a tour de force of inventive songwriting and surprisingly powerful singing, and a fresh stab at the psychedelic rock genre that had by 1970 grown tired. This is a rare slice of rock from the late 60's partially produced by the late, great Frank Zappa. Features some nice songwriting, plus FZ's guitar on a few tracks. 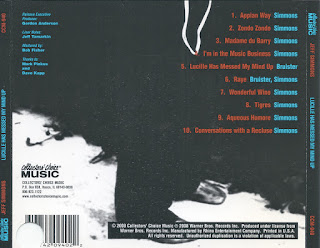