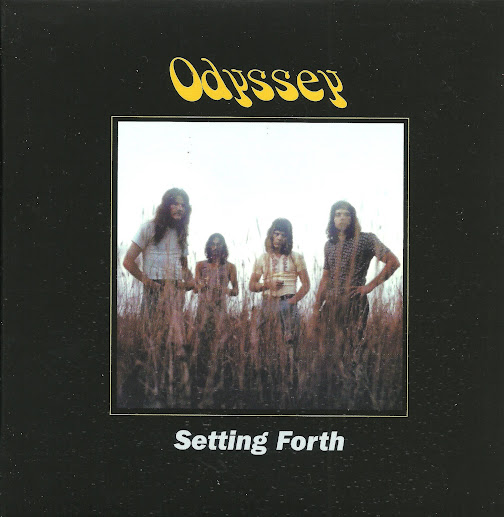 Reissue of one of the ten rarest psych albums from the USA, with sleeve notes by the group's leader and keyboardist Vinny Kusy. 2xCD packaged in a Stoughton tip-on gatefold mini-LP sleeve, with a 24-page booklet and an OBI, in a mylar outer sleeve.

Once upon a time, when the music business was more music than business (but only just), there was a lean, mean, and super tight band who created a quintessential dose of New York sixties psychedelia: one perfect album, loaded with heavy swirling organ, ferocious fuzz guitar, and powerhouse vocals.

That band was Odyssey. Their album, Setting Forth, did not take them from support slots in their native Long Island to the major label heights of other local bands like Vanilla Fudge. But it is that same Odyssey Setting Forth album that is one of the greatest guitar-heavy psych records in the world, and as a result one of the most sought after (and expensive) psychedelic rarities ever pressed on wax.

Now it has been painstakingly remastered, repackaged for this 2xCD deluxe edition, ready for true psych fans to devour.

This is truly one of the pinnacles of underground psychedelic music, recorded in 1969, originally released in an edition of fewer than 100 copies, and impossible to find as it only came in a plain white cardboard sleeve; an incredible, musically accomplished, hard rocking album of originals that jumps right out of the speakers and grabs you, from its opening In-A-Gadda-Da-Vida-esque riffs right to the grooving end.

The 24-page booklet that accompanies this two-disc set has the complete band history by Odyssey leader Vinny Kusy, as well as rare photos from his own archive. Bonus tracks on disc one are three ''basement recordings'' from the Setting Forth era.

The second disc contains Odyssey Live at Levittown Memorial Auditorium: 1974, a live recording that was never really meant to be, recorded by Odyssey's sound engineer on a portable cassette recorder. It is the only document of Odyssey in their progressive rock phase, just before sometime Odyssey keyboardist Tom Doncourt and band-member Fred Callan recorded their legendary, Cathedral Stained Glass Stories album. The original Live at Levittownrecording has been remastered by Tom Doncourt of Cathedral. 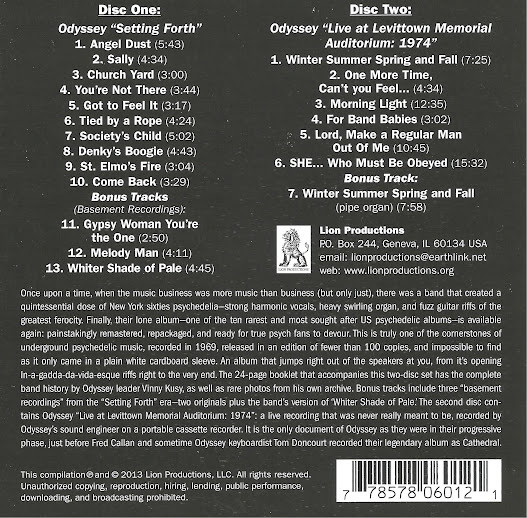