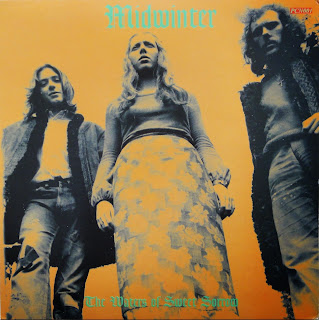 This small band existed during the years 1972-1974 as a separate project of musicians who were deeply involved with the folk music scene. This sole album representing their achievements was recorded in year 1973, but it wasn't released until 1994 as a CD. The sound of the recording is average but still pleasant, and there is some analog hiss audible and few softly muted parts detected, probably due the affections of entropy towards the original tapes. The material is similarly well produced and sincere sounding ancient romanticism. All of the musical possibilities and variations of a small acoustic ensemble are exploited here in professional manner.

The opener "Sanctuary Stone" presents the pretty voice of Jill Child, and it is immediately clear that this is a quite purist medieval oriented folk record. Some light percussion accompanies the classical guitar chords, and the only modern instrument here is the amplified bass guitar. "To Find a Reason" has tender male vocals, an acoustic guitar, a pretty simplistic flute a totally wonderful descending melody, and is one of the brightest highlights of the album for me. "The Skater" has a Celtic sound on the guitar and vocal melodies. The voices have a slight echo on them creating a feeling of large space, and the droning rhythm is accompanied by a mouth harp, flute and tablas. The "Scarbrough Fair", which was made famous for the bigger audiences by the folk duo Simon & Garfunkel, is here arranged for several vocals in a rustic ancient style. "The Oak Tree Grove" is then a bit similar tune with the album opener, and "Dirge" sounds like an animistic ritual music, having a primitive guitar, tambourine and a flute. Though the basic melodies of "Maids And Gentleman" is also medieval styled, there's some soloing with electric guitar from the blues scales here, slightly breaking the dogmatic line of the record, but still being pleasant for the ear. "The Waters of Sweet Sorrow" is then another beautiful tune for several acoustic guitars, and as it's accompanied with the sweet singing and brilliantly composed verse, it's no wonder that this song's name was selected as the title of this album. "All Things are Quite Silent" is played with raw, ancient sounding mandolins, and when they unite with soft female voice, an interesting contrast is borne. This song brought me a visual association of a small medieval European village covered in wintertime snow. "The Two Sisters" has a nice conversation dialogue with the guitar and tender flute, and it also has both male and lady vocals. Later also distorted but silent solo guitar accompanies this religious themed composition. The album is closed with "Winter Song", which is a quite simple but has very beautiful arrangement for guitar and several voices, bringing up great choral harmonies at the end of it.

My interest towards this record was caught by its cover, which is a painting named "The Lady of Shalott" from John William Waterhouse. This scene is from a poem by Arthur Hughes, and the basic principle of Pre-Raphaelite artistic movement was to look back in time when seeking inspiration and themes. The romantic folk music of Midwinter does the same, so the cover painting selection fits here better than wonderfully. This record is recommended sincerely to fans of both folk music, and to those who are interested of bands with a lady singer on lead vocals.
~progarchives (by Eetu Pellonpaa ) 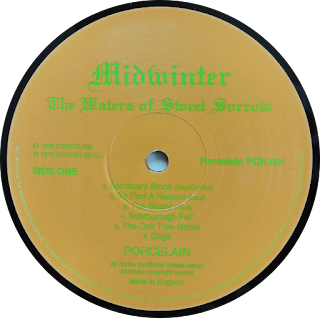 Side one:
A1 Sanctuary Stone
A2 To Find A Reason
A3 The Skater
A4 Scaborough Fair
A5 The Oak Tree Grove
A6 Dirge

Side two:
B1 Maids And Gentlemen
B2 The Waters Of Sweet Sorrow
B3 All Things Are Quite Silent
B4 The Two Sisters
B5 Winter Song