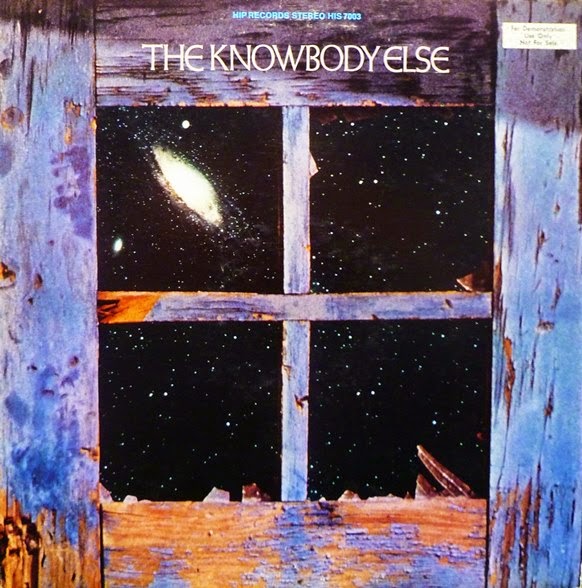 Hailing from the northeast corner of Arkansas, Knowbody Else was a groundbreaking musical force during the Summer of Love who were caught up in the post-Sgt Pepper / Byrds-ian day-glow era. What they created at Ardent Studio in 1967 with legendary Memphis producer Jim Dickinson is nothing short of a truly brilliant psychedelic masterpiece influenced by “the times they are a changin.” LP 'The Knowbody Else' (Hip Records HIS 7003) 1969' Hip Records was a short-lived subsidiary label of Stax (two of their few other releases were Southwest FOB and Paris Pilot).
Original US pressing self-titled LP that was largely ignored at the time, by a young garage psych band playing hippy drifter music which is sometimes strange and some times bluesy. These guys never compromised on this one, securing eternal cult status. And nothing more. During this time the band became interested in psychedelia and Eastern spiritualism which, combined with their Southern Baptist upbringing, contributed to their sound. After several trips to Los Angeles, California , in 1970, the band was signed by Atco Records and rechristened on "Black Oak Arkansas".
A mix of heavy psych and hippie rock, with fluid guitar and some good tracks: 'After I Smoke I Like To Go To Sleep', 'Flying Horse Of Louisiana' and 'No One And The Sun' somehow they were once frighteningly innovative and experimental artists, and properly document their prophetic sense of musical and poetic genius for all to experience.
Thank you so much Adam for that effort
gigic2255

The group, originally called "The Knowbody Else", was formed in 1965 in Black Oak, Arkansas, by Jim "Dandy" Mangrum (vocals), Rickie Reynolds (guitar), Stanley Knight (guitar), Harvey Jett (guitar), Pat Daugherty (bass), and Wayne Evans (drums). Their first PA system was stolen from a local high school. Members of the group were subsequently charged in absentia with grand larceny and sentenced to 26 years at the Tucker Prison Farm (this sentence was later suspended.) This led to their retreat to the hills of rural northeast Arkansas where they lived off the land and refined their musical style. Some of their influences during this time were The Beatles and The Byrds.

Before they sweeped the nation throughout the 70's, Black Oak Arkansas already recorded an album in 1969 as The Knowbody Else. Released on the Stax Label (famous for being a soul music label par excellence), this is a nice little hippie album. Similar in gesture to Hour Glass.

The Knowbody Else moved to Memphis, Tennessee in 1969 and signed a record deal with Stax Records. Their self-titled debut album, and their only album with Stax, was largely ignored by the populace. During this time the band became interested in psychedelia and Eastern spiritualism which, combined with their Southern Baptist upbringing, contributed to their sound.
~skynfan.blogspot 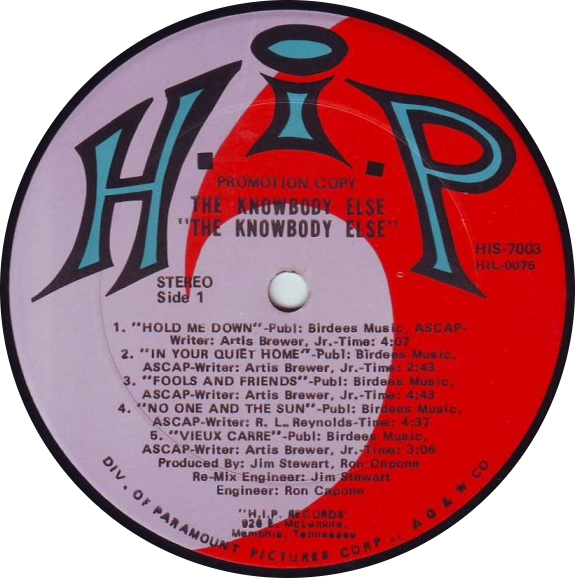 Side one:
A1 Hold Me Down
A2 In Your Quiet Home
A3 Fools And Friends
A4 No One And The Sun
A5 Vieux Carre
Side two:
B1 Flying Horse Of Louisiana
B2 After I Smoke, I Like To Sleep
B3 One Life Two Live
B4 Black Blues

The Knowbody Else - Vieux Carre