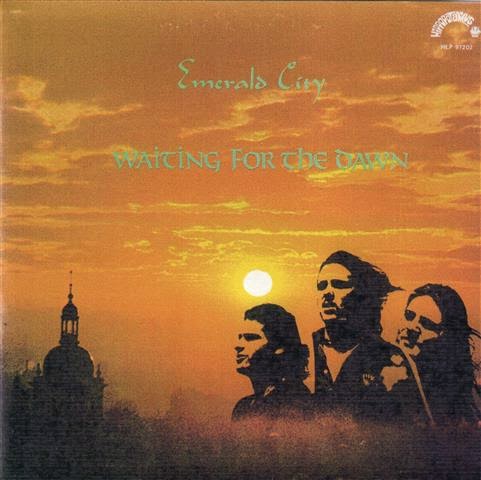 Released by the small Canadian Hippopotamus Records, the trio's debut "Waiting for the Dawn" was recorded in Quebec with Joey Perno and Enright producing. With Enright credited with penning all ten selections, tracks such as the instrumental 'Guiding', 'Hold Of My Soul' and the pseudo-funky 'Rythmn Highway' (sic) offered up an intriguing blend of surprisingly commercial moves and Hendrix-styled guitar. At the risk of scaring some of you off, mid-'70s Frank Marino and Robin Trower come to mind, though it isn't an exact comparison. While Marino and Trower worshipped at the Hendrix alter, these guys kept a respective distance. Among the few complaints, the female backing chorus was occasionally disconcerting ('Hold of My Soul').

Independent record labels also sold thousands of the original vinyl LPs to record distributors in Japan. Emerald City performed live in nine of the ten Provinces of Canada, as well as in a handful of towns in upstate New York. In '96, after much demand, Waiting for the Dawn was reissued on vinyl and distributed in Canada, the USA, the UK and Europe. The supporting vocalists on the original studio LP were two singers who were part of a female Canadian pop vocal trio called Toulouse (Lori Zimmerman and Mary-Lou Gauthier), who had a string of pop hits in the 70’s. Mary-Lou went on to become the most known singing voice on Canadian big retail store advertisements. She also started working as a singer in Celine Dion’s recording and stage band in the 80’s. She is now living in Las Vegas and is still an important singing voice in Celine’s Vegas show band. The keyboardist, Roger Gravel, was a well renowned Canadian Broadcasting Corporation house conductor/arranger. This labor of love was and still is the highlight of Matty's career and holds a very dear place in the hearts of George & Pat as well. Matty deserves at least 80% of the credit, he wrote, sang, played, produced, directed, and generally managed every aspect of Emerald City. These are memories and souvenirs which have no boundaries in time. Who would ever think that Emerald City, Waiting for the Dawn, would make it into any future, let alone a future millennium... these guys have much to offer.
Thank you so much Adam for that effort
gigic2255


Released by the small Canadian Hippopotamus Records label, the trio's 1976 debut LP "Waiting for the Dawn" was recorded in Quebec with Joey Perno and Enright producing. With Enright credited with penning all ten selections.
Matty Enright was an up-and-coming 18 year old guitar whiz with a 17 year old drummer, Pat Saraceno who had a style that was perfect for the songs Enright was writing. George Gardos (bass) was older (27) and was a musical celeb in Montreal and New York at that time. George had played with one of Montreal's renowned show bands called "Bartholemew Plus Three" which later went on to become "Energy". He's also played with Walter Rossi's band "Charlee". Energy's drummer at the time, Corky Laing, was drafted in 1969 by Felix Papalardi, who was Cream's producer, to form "Mountain". George had jammed with Walter Rossi and Jimi Hendrix when the original Experience were in Montreal on April 2, '68, to play the Paul Sauve Arena. Jimi had stopped by with his colorful entourage at Energy's rehearsal studio on Cote des Neiges Street and George Gardos played the bass for the entire marathon jam session that took place. George had been traveling between gigs in Montreal and NYC for a couple of years before he joined up with Emerald City. The original vinyl records of "Waiting for the Dawn" were pressed sometime in '75 and '76. No formal release date, no record launch and absolutely no promotion was ever done. Most of the original vinyl LP's were distributed at Emerald City's live gigs and that is why they can only be found in the underground record world and with the vinyl record collectors and dealers. Independent record labels also sold thousands of the original vinyl LPs to record distributors in Japan. Emerald City performed live in nine of the ten Provinces of Canada, as well as in a handful of towns in upstate New York.
~ytb (drprogensteinphp)