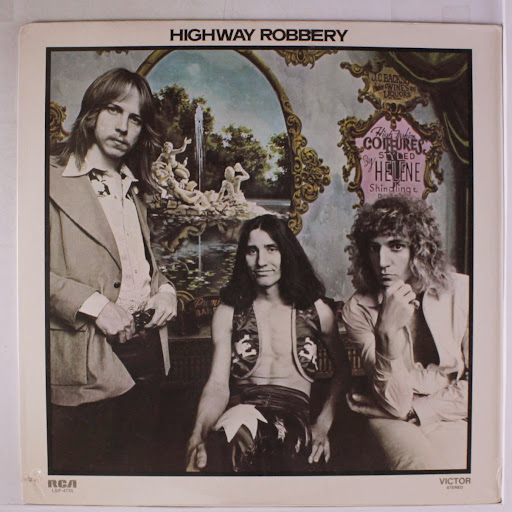 After a stint with The Boston Tea Party lead guitarist Michael Stevens began looking for another project. Perhaps inspired by Capitol Records' success with a power trio (e.g. Grand Funk Railroad), Stevens decided to build a hard rock trio. He eventually ended up with a line up consisting of singer/drummer Don Francisco who had previously been a member of the California-based Atlee and Crowfoot and bassist John Livingston Tunison IV had been in an outfit by the name of Manitoba Hugger (?).Stevens and company attracted the attention of managers Robert Cavallo and Joseph Rufallo who'd turned acts like Little Feat and The Weather Report into big names. The pair signed Highway Robbery to their management roster and quickly approached Bill Halverson about producing the band's debut album. Signed by RCA Victor and teamed with Halverson in the production role, all hyperbole aside, these guys managed to write and record one of the great and overlooked hard rock albums of the 1970s. At least to my ears 1972's "For Love or Money" is a impressive on a number of fronts. With Stevens credited with writing all eight songs, the LP wasn't particularly original, but the band had good taste when it came to appropriating sounds. In this case their recipe borrowed liberally from bands like early Black Sabbath, Blue Cheer, Free, Led Zep and even a little Grand Funk bombast. Those ingredients were then mixed into something that managed to combine hard rock punch with a commercial sheen that was derivative, but still quite attractive. With the exception of a pair of radio ready power ballads which were supposedly tacked on the album when RCA executives threatened to shelve the set for lack of commercial potential, this album simply didn't let up. Propelled by Francisco's shrieking voice and Stevens' hyperactive guitar, tracks like 'Mystery Rider', 'Fifteen' and 'Lazy Woman' (the latter one of two songs with Tunison handling lead vocals), were simply killer slices of early-1970s metal that match up well with any of the band's better known competition. Even more impressive, these songs were tuneful and occasionally even boasted lyrics that rose above the typical 'need-my-woman-now' standard you'd expect from long haired freaks. At some risk to my rock credibility (big laugh), I'll even readily admit that the two commercial numbers 'All I Need (To Have Is You)' and 'Bells' were both actually pretty good.For love or money, Highway Robbery hereby dedicates itself to roar, to drive, to sensitive joy and, above all, the emission of the highest levels of energy rock. Let it be known that Michael Stevens – lead guitarist, vocalist, writer of all material contained herein, child of a gypsy commune – carries out this pledge in the true manner of his forebears. Further be it known that he is in allegiance with Don Francisco – drummer, lead singer and a New York native whose main influences have been traditional New Orleans-based bands such as Robert Parker & the Royals and Deacon John & the Ivories; and with John Livingston Tunison IV – bassman, vocalist and painter, whose first sound memories are of Muddy Waters and B.B. King. FOR LOVE OR MONEY: signed, sealed and created by the aforementioned Highway Robbery, in this age, on this day, in the name of storming, beautiful rock and roll. 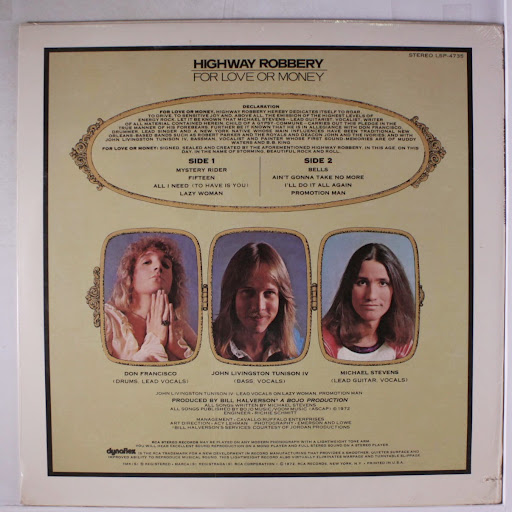