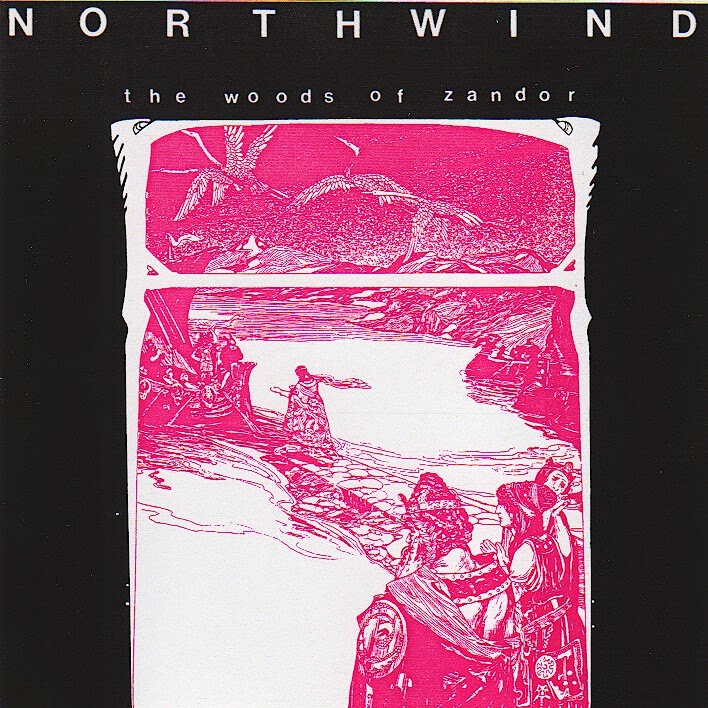 From what I understand, this is a demo from a 70s group which never really got off of the ground. Thanks to the internet, however, they've been able to distribute this recording, which is, if nothing else, an interesting listen and something of a time capsule. Northwind plays a very folky kind of rock music that obviously has a lot of influence from the prog bands of the day. Throughout this release I can hear shades of almost every 'big' prog band of the seventies, with nods to Genesis, Yes, and King Crimson pervading the album.

'Live' begins with an acoustic/electric guitar duet that sounds to me to be fairly reminiscent of some Allman Brothers work, of all things. Some nice vocal harmonies enter fairly quickly, but there's not really a whole lot else to the song. A pleasant bass part and some nice guitar fills round out the sound and it's a fine listen if nothing particularly special.

'Nightmares' begins with a more uptempo guitar part, and on the whole it's a pretty similar song to 'Live.' Good vocal melodies and interesting if not particularly complicated instrumental parts. 'Nightmares' does improve over 'Live' by adding a couple of instrumental breaks and some interesting syncopated vocals that are at least reminiscent of, if far simpler than, Gentle Giant. As for the overall sound of the track, Crosby, Stills and Nash wouldn't be a bad comparison, with the folky melodies and pervasive vocal harmonies recalling the work of that band.

'Zandor' begins with a more driving bass line that sounds a bit like latter day Zeppelin. Vocals enter quickly and the song takes on an epic, western feel that's undercut slightly by some rather dated synth sounds. This song really shows a lot of the band's influences, with sections that bring to mind Genesis, Rush, and the aforementioned Led Zeppelin without ever managing to reach the sophistication of any of those bands' work. Nonetheless, it's a fun listen and it makes one wonder what this band could have done if they had ever gotten their big break and moved beyond demos. The rather cheesy synths return for a still enjoyable final instrumental which closes out the track.

'Some Other Way' begins with a classical guitar part before launching into a vocal section that sounds a bit like a folkier Wishbone Ash. A nice guitar solo breaks the otherwise acoustic folky feeling of the track. This album really does have some great vocal melodies and harmonies, a trend which perhaps even reaches its apex on this track.

'Aftermath' is the final track here and probably the proggiest as well. Beginning with an epic guitar-backed-by-organ intro section, the song transitions into a keyboard solo that sounds like a harpsichord. Vocals enter soon after, with crystal clear tone and a rather delicate delivery that really highlight the strength of the vocalist. The track gets a bit heavier after that, and another good guitar solo appears before vocals re-enter. The first theme is repeated before the track switches gears, going into an extended instrumental section before vocals return. 'Aftermath' reminds me quite a bit of early King Crimson, with the dramatic vocals highly reminiscent of 'Epitaph' or 'The Court of The Crimson King.' While 'Aftermath' is certainly not as polished as any of the 'big' bands of the era, it's still a fine epic and a fun listen.

When listening to this album I often got the feeling that the music was reminding me very strongly of another band, but for the life of me I couldn't pin down what it was. I suspect it's a result of the blend of influences that pretty obviously permeate this recording. It should come as no surprise that this obviously doesn't measure up to any of the big recordings of the 70s, but it's interesting to hear this release almost 40 years after it was recorded from an up-and- coming prog band that never quite got there. Not a necessary listen by any means but a lot of fun.
(~progarchives) by VanVanVan