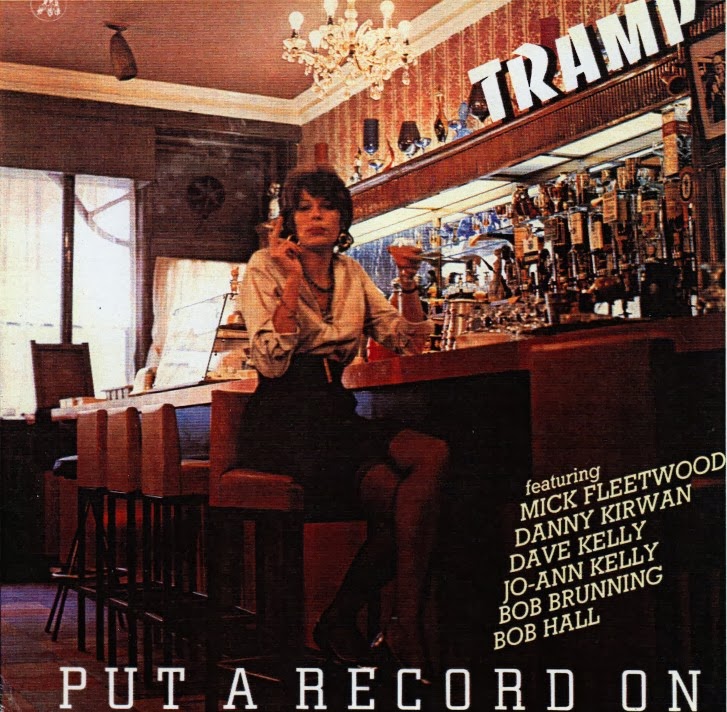 Starting a conversation about the "Tramp" is quite appropriate to put the question: whether there was such a group actually do? With a five-year break they were recorded only two studio albums and played a series of concerts in small halls . Massive success they got , and maybe it has not sought . Nevertheless , there playing British blues numbers. Originally "Tramp" was a one-off studio project , organized in 1969 with producer Peter Eden efforts of two musicians - bassist Bob Brunning, and pianist Bob Hall. By the time they were both veterans of the British blues scene . Brunning was a member of the very first part of the legendary "Fleetwood Mac" Peter Green era , and also played in the "Savoy Brown". In this group he met with Bob Hall. Last time to beat the blues with many groups, and all participated in the recording of some thirty albums. It was decided not to focus on cover versions , and record your own copyrighted material . For this assistance Brunning and Hall was brought Dennis Cotton, as a result of almost all songs on the album were written purely in their three blues vein . Could only pick up artists . As vocalists Bob Hall suggested inviting his friends - brother and sister Dave Kelly, Jo-Ann Kelly. Dave Kelly was the lead guitarist and vocalist "John Dummer Band", as well as doing a solo career , releasing two albums under his own name in 1969 and 1971. Jo-Anne Kelly , named the magazine "Melody Maker" Queen of British blues , participated in musical projects of his brother , and recorded solo. To circumvent contractual limitations " on the main job " in this project they were under pseudonyms Little Brother Dave and Memphis Lil respectively. Other musicians invited Bob Branning . For disc recording he decided to bring his friends to "Fleetwood Mac" - guitarist Peter Green and drummer Mick Fleetwood. While "Fleetwood Mac" was the best blues- rock band the UK nevertheless Green and Fleetwood agreed to participate in this session project. However, to the recording studio , Peter Green and did not reach . Bob Branning later wrote that due to illness, while adding that the incident was a sad omen followed shortly known events . This refers to the care of Peter Green's "Fleetwood Mac" in the next year and develop his mental disorder , which put an end to his career of one of England's best blues guitarists . Instead, Green came to the studio Danny Kirwan, and then played "Fleetwood Mac", and after the departure of Peter in the next year , which took place the lead guitarist of the group.

After recording , the participants returned to their own musical projects. Fleetwood and Kirven continued stellar career in "Fleetwood Mac". Dave and Jo-Ann Kelly recorded his solo albums , and in 1973 came back to the group the next reincarnation of John Dammer . As for Bob and Bob Hall Branninga , they actively recorded and performed with a variety of musical compositions , including his own group "Brunning Hall Sunflower Blues Band". However, this story had its continuation . After five years, the company "Spark Records" suggested Hall and Branningu record another album under the auspices of "Tramp". They immediately agreed and began to recruit musicians. Ironically, despite all the vicissitudes of the past five years since the debut album , especially in the ranks of "Fleetwood Mac", was able to collect all of the original composition of "Tramp", which was supplemented by saxophonist Dave Brooks of "Manfred Mann" and percussionist Ian Morton. The album was entitled "Put A Record On". In his review of the disc in the magazine "Melody Maker" was asked a rhetorical question : " This is the last echo of the sixties ? " Actually, in the sixties the music played . The disc does not contain cover versions , the material was largely written by Hall and Cotton. Music turned on classic pub - rock era of the mid-seventies dopankovskoy . The album included quite a variety of compositions ranging from stylized prewar archaic to funk . Blues is certainly present, but clearly did not prevail . The album was built on the interaction of the piano and saxophone. Guitar here did not play a leading role . The result is an interesting live recording in her compositions, each of the participants of the project are fully able to demonstrate their musical abilities . Especially like to mention here the vocals Jo-Ann Kelly, was present at half the album's tracks and gives it an unusual warmth and charm.
"Blues is easy to play. But it's hard to feel." (Jimi Hendrix)
Thank you so much Adam for that effort

Liner Notes »
Recording sessions involving musicians who do not regularly work together can be notoriously unproductive, the shelves of second hand record shops are littered with dusty remnants of what might have been a great session.
Happily 'Tramp' is a very fine exception to this rule, perhaps because although there is plenty of creative and spontaneous playing on these tracks, the songs themselves, written by Bob Hall and Dennis Cotton, are economical, witty and tightly constructed; there are no twelve minute guitar solos on this record. Every musician contributed hugely to the overall strength of performance that is obvious throughout the set. Dave and Jo-Anne Kelly are renowned for their ability as blues singers, and they tackled each song whole-heartedly, often adding new ideas whilst actually recording. Bob Hall is surely the finest boogie pianist in Britain, and has never played better than on these sessions. Bob Brunning is also a highly experienced bass player who has worked and recorded with many blues giants, forming a unit with Bob Hall which has become much in demand by impressed visiting American performers, many of whom have invited them back to the States to form a permanent band! Mick Fleetwood has been the mainstay of Fleetwood Mac for a long time, and when one listens to this exciting playing on this album, one can see why - listen to his inspired and absolutely spontaneous drum lead in during the entirely unrehearsed piano break in 'Too Late For That Now' which leads incidentally to one of the most exciting solos heard in a long while. Danny Kirwan plays crisply and economically, showing his ability, unusual among rock guitarists - to know when not to play, nevertheless turning in some pleasing solos. Dave Brooks proves just how easily he recently stole the show on some of the '73 American Blues Legends performances, and last but not least, percussionist Ian Morton adds a lot of excitement to the proceedings. Here then is a fresh and exciting album representing of more than worthwhile gathering together of some well known musical 'Tramps'.

MICK FLEETWOOD - Drums
Founder member of Fleetwood Mac. He played on all their hit records and is currently spending most of his time touring the U.S.A. He is an old friend of Bob Brunning who he played with in Fleetwood Mac.
DANNY KIRWAN - Guitar
Replaced Peter Green as the lead guitarist in Fleetwood Mac and previously had his own band 'Boilerhouse'. He is currently forming a new band and is touring the U.S.A. He appeared on Volume One of Tramp, replacing Peter Green as he was unavailable.
DAVE BROOKS - Sax
Tenor Player for Manfred Mann, currently freelancing and doing session work.
DAVE KELLY - Vocal
Lead guitarist and vocalist with the John Dummer Band, he has made several albums with John Dummer and also two under his own name.
JO ANNE KELLY - Vocal
Sister of Dave Kelly, she was once dubbed by Melody Maker as Queen of British Blues Singers and has made two albums under her own name. She has toured the U.S.A. and is returning for a further visit.
BOB BRUNNING - Bass
Bass player with Fleetwood Mac and Savoy Brown. He left to continue his career as a teacher, he is working with Tramp and is also a member of a band he got together with Bob Hall, The Sunflower Blues Band.
BOB HALL - Piano
Together with Bob Brunning, he has recorded and toured with a number of American Blues men. He co-wrote all the songs on the album and has made over thirty LP's with various bands including Savoy Brown.
IAN MORTON - Percussion

Reviews »
Perhaps I had my hopes too high for "Put a record on" after hearing the classic first Tramp album (which was selftitled from 1969) but I don't think the addition of Dave Brooks on sax and Ian Morton on percussion was a good idea as I found those parts intrusive and most of the material on this album is given a forced funk type sound which is just not as appealing as the raw, more improvisational approach used (and that worked so well) on the first Tramp album. Having said that, it is not horrible as the peppy opener "Too late for that now" is a highlight of the material here but that is followed by a draggy funk called "Now I aint a junkie anymore". "What you gonna do" was co written by Brunning and it is one of the better funk pieces enclosed here. However, the slight reggae feel on "Like you used to do" is rather silly sounding and just doesn't work. "You gotta move" is a punchy rapid swing though let it be known that this track was oddly omitted from the CD version of PARO (when released on CD on it's own, it is included on the "2 on 1" Tramp CD called "British blues giants"). The title track starts off side two and maybe I would've thought better of it had I heard this version first but having heard the definitive Brunning Sunflower Blues Band version (from the "Brunning Hall Sunflower Blues band" album from 1971) of this song first, this (& it's various outtake versions that have since appeared on Jo Ann Kelly outtake compilation CD releases) sounds as if it was attempted to be played in a commercial vein for no good reason (other than the obvious one of wanting a hit single and that was not what Tramp was originally about, or so I thought). "Funky monkey" is a busy sax/guitar funk which is probably the most rocking tune on this album but again, it must be said that it's nowhere near as effectively rocking as the rocking material on the first Tramp album. "Beggar by your side" could've been a good slow burning blues had it included a more empty arrangement but the sax and chirpy guitar riffs really annoy here."Paternity orders" is a piano ragtime attempt but the hard strumming acoustic guitar part hardly even seems worth it as it gets buried under the rest of the production for the most part and the closing "It's over" is a fitting stroll in the classic 50's "Blueberry hill" mold. On it's own, this album probably is not a bad funk platter but as a reunion record, it's disappointing to say the least.

Comments »
Recorded January 9th & 10th 1974
# #  Although listed on both the CD jacket and the CD itself, the track "You Gotta Move" does not actually appear on the CD reissue. It is on the original vinyl issue though.
This album along with Tramp are also collected on the British Blues Giants CD (which does include "You Gotta Move").
~discog.fleetwoodmac (John Fitzgerald)

Tramp - Beggar By Your Side

Tracks:
side one:
A1 Too Late For That Now
A2 Now I Aint A Junkie Anymore
A3 What You Gonna Do
A4 Like You Used To Do
A5 You Gotta Move
side two:
B1 Put A Record On
B2 Funky Money
B3 Beggar By Your Side
B4 Maternity Orders (Keep On Rolling In)
B5 It's Over