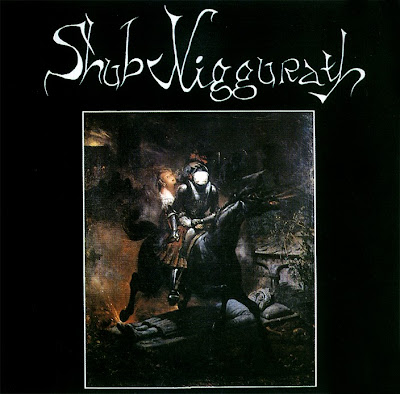 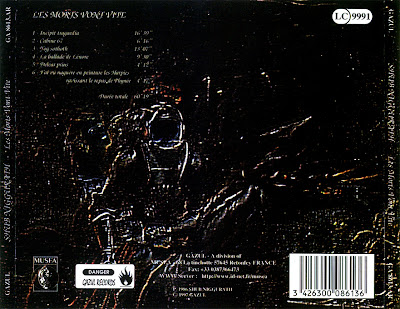 SHUB-NIGGURATH was formed in 1983 and consisted of six musicians: Allan Ballaud on bass, percussionist Franck Coulaud, Frank Fromy on guitar and percussion, Jean-Luc Herve on harmonium, piano and organ, vocalist Ann Stewart, and a trombone/bass player Veronuque Verdier. The band released their first untitled demo on 1985 and got good feedback from critics. The promising debut album, "Les Morts Von Vite", was released on Musea label in 1987. The album received good reviews and is their finest moment: it caught the band at the peak of their creativity. Musea reissued this album on CD in 1997, including two rare bonus tracks. The debut sold well and later, in 87, SHUB NIGGURATH's song appeared on Musea's Zeuhl compilation "Enneade", a tribute to the legacy of Magma. After its release, Franck Couland left into jazz, as did Franc Fromy. Jean-Luc Herve, being a guitarist, took Fromy's spot. In 1988, SHUB-NIGGURATH collaborated with SLEASE ART on a compilation called "Dithrambe". 1989 brought another compilation, "Douze Pour In 2" followed by a live tape with the new line up: Allan Ballaud on bass, Jean-Luc Herve on electric guitar, Veronuque Verdier on bass trombone and percussions, two singers Sylvette Claudet and Jean-Pierre Lourdeau, and the drummer Michel Kervinio. Some members vhanged instruments, which displays the musical versatility of the band. A second studio album was released on CD in 1991, called "C'etaient De Tres Grands Vents" on Musea label. It was released by the same lineup except a new percussionist, Edward Perraud, was added and Jean Pierre left the band to become a painter. Since then, the band has toured around Paris playing for small audiences. In 1995 bassist Allan Ballaud died of cancer. They made a comeback in 2003 with the third album "Testament". At this point the band consists of four people: - Jean Luc Herve on guitar, Veronique Verdier on trombone, bassist Alain Ballaud and drummer Edward Perraud.

SHUB-NIGGURATH's best album is the debut, and it's also the best place to start exploring their music. However, their career has been fairly consistent and the other two albums are quality efforts.

If you like dark, brooding mix of RIO and Zeuhl you will like SHUB-NIGGURATH. their avant-ish dark prog with a sharp edge is both unique and challenging. (ProgArchives)