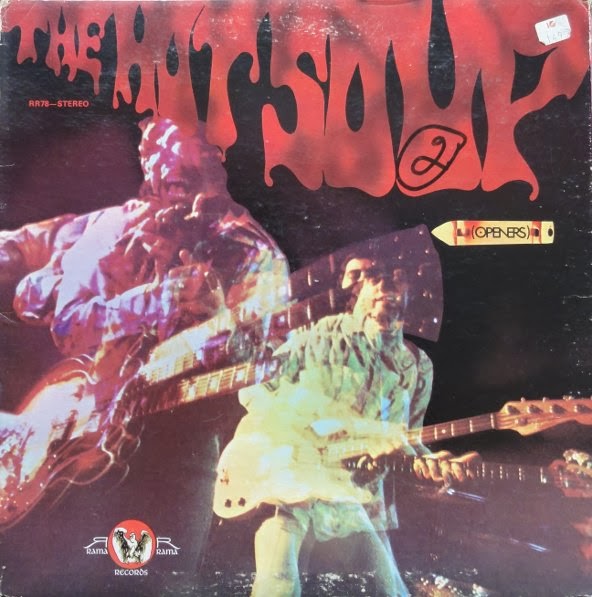 This one's largely a mystery to me - I've looked and looked, but found virtually no bibliographical information on the net, or any of the reference works I own.   What little I can tell you about the band comes from the brief inner sleeve liner notes by producer Saul Mizrahi.

Here's an executive summary of Mizrahi's notes -  The band consisted of
keyboardist Willie Akridge, bassist Frank Carillo, singer/lead guitarist Mario Castellano, and drummer Glenn R. Tappan.  Born in Havana, Cuba and raised in Miami Beach, Florida, by the time he was a teenager Castellano was touring throughout the South as a member of The Pods who were apparently a Beatles influenced cover band.  He met Akridge while playing a show in Dothan, Alabama and a couple of years later the two somehow crossed paths with Carillo and Tappan and began playing around New York City where they caught the attention of manager Billy Mann.

Packaged in an extremely psychedelic looking cover, 1969's Mizrahi produced "Openers" looked pretty promising when I stumbled across it at a community yard sale.  So much for covers ...   With Castellano and Carillo separately responsible for all twelve tracks, the cover was the most psychedelic feature here.  Most of the album found the quartet working in a blue-eyed soul vein.  Imagine a heavier version of The Young Rascals and you'd get a feel for songs like 'Gettin In My Way Again', 'He Answered My Prayers' and 'Why Do You Want To Hurt Me'.  I'm a big Rascals fan so that comparison was meant as a compliment in my book.  Other positives - Castellano had a great and highly versatile voice while the band played with considerable energy throughout.  Also worth mentioned; there were a couple of notable exceptions to their blue-eyed soul catalog.  The closer 'Ain't No Reason' was an atypical fuzz drenched blues-rocker.  'You Took Me By Surprise' was a nice rocker while 'Groovy Feelin' was kicked along by some nice fuzz lead guitar and rocked harder than anything else on the LP making it the standout track.  The album also spun off a 45 in the form of:

And that was apparent the end of the story ...  All told a pleasant discovery.  Nothing to spend your next paycheck on, but worth looking for.

Akridge's post-Hot Soup career found him playing in a number of bands including High Street Carnival, Cadillac Jack, The Woolvin James Band, and Quick.  He apparently continued to play keyboards till the end of his life - he apparently died in the mid-1990s though I've never seen his obituary.

Carillo's enjoyed an extensive solo recording career and though it doesn't mention The Hot Soup, he has an extensive website at:

Tappan  remained active in music operating GRT Unlimited Recording Studios in Florida and still plays and is a member of the Treebo Jazz Band.

No luck tracking down Castellano.  Anyone know what happened to him?
~rateyourmusic (RDTEN1)

Mostly soul oriented vocal rock, with some period flavor shining through on the better tracks. This highly inconsistent album is worthwhile to underground fans for the few hard rock stand-outs. Otherwise, to my ears, it's eminently forgettable. Grades - 1 B+, 1 B, 1 B-, 2 C+'s, 1 c, 2 C-'s, and 2 F's
~rateyourmusic (tymeshifter) 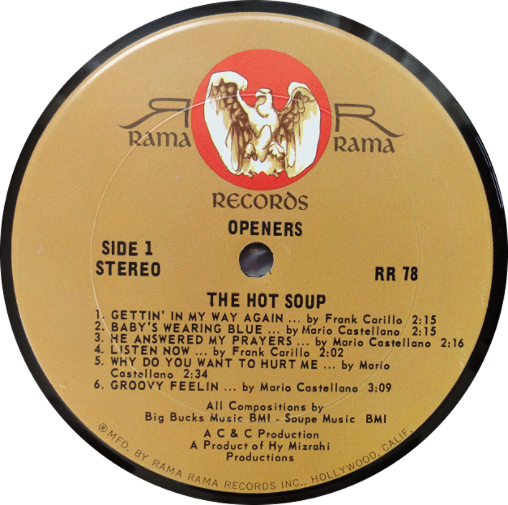 Tracks:
side one
A1 Gettin' In My Way Again
A2 Baby's Wearing Blue
A3 He Answered My Prayers
A4 Listen Now
A5 Why Do You Want To Hurt Me
A6 Groovy Feelin
side two
B1 You Took Me By Surprise
B2 You Got To Set Me Free
B3 Oh No! Not Again
B4 Once Before
B5 Farewell Sweet Papa
B6 Ain't No Reason