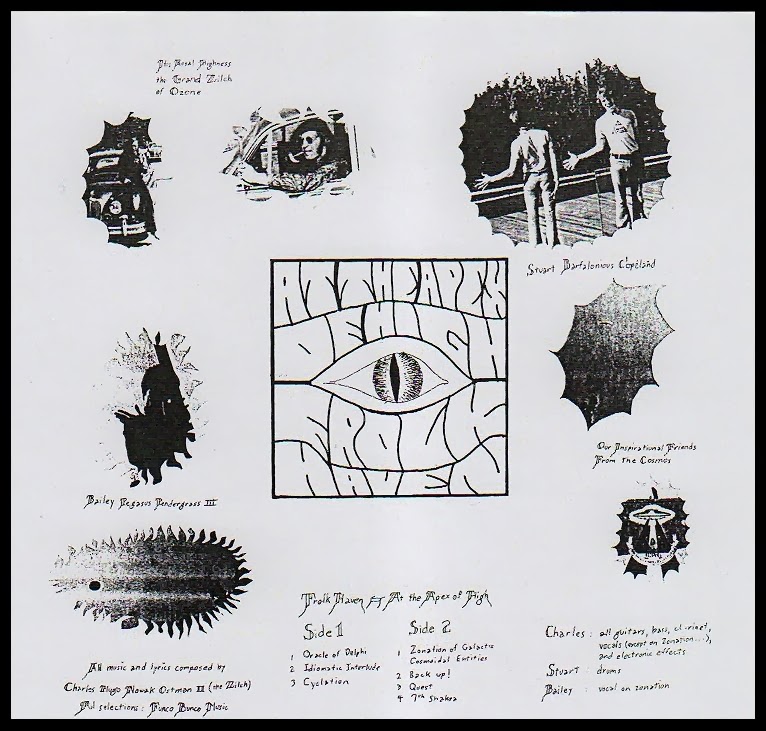 Frolk Haven - At The Apex of High LP. Original rare 70s progressive psychedelic acid trip record with plenty of free-form insanity ala Captain Beefheart, Zappa and the twilight zone. Features a young Stuart "Barfalonious" Copeland on drums a while before he would join the Police and strike it rich.
Repro of super rare early '70s off the wall acid Madness often compared to Ya Ho Wa.... Varied instumentation... psych jams with melody and chaotic strangeness... featuring Stewart Copeland (Curved Air/The Police) when he was at College!!

Startlingly heavy progressive group, sounding more like a modern group such as Absolute Zero than one from '72. Most likely the album was a one-off project, as the boys recorded and released it themselves while in college in England. The group consisted of just two people: Charles "the Zilch" Ostman (Guitars, Clarinets, Bass, Vocals, electronics) and Stewart Copeland (Drums, additional percussion). Charles Ostman wrote all of the songs and is the only performer on 3 of the album's 7 tracks. Anyone know what happened to him? Stewart of course went on to Curved Air, the Police, Animal Logic, and a fruitful solo career. His performance here is similar to his work on Curved Air's Midnight Wire, but less restrained.

The sound on this album is different, frequently comparable to Absolute Zero or the Jimi Hendrix Experience, but generally it is their own. Very Eastern sounding, and pretty complex despite being very nearly a one-man show. The vocal sections are often interspersed with long dreamy, clarinet-laden instrumental passages. No, I kid you not: the clarinet is one of the most prominent instruments on this album, second only to the guitar. The vocals are soft, USA-accented, and subtly emotional - in fact they sound a lot like Stewart Copeland's, for those of you who have heard his vocals. Fuzz, Acid, and Flowers describes the album as being tedious, but in fact much of the album is quite exciting, and really the "tedious" parts are the most interesting. Still, this is a record which requires diligent listening, and if you're not willing to give that you should stay away because this record will bore you.

The album opens with the 12-minute "Oracle of Delphi". It starts with an apocalyptic outburst: a harrowing bass line leading the way for a serious of vicious assaults on percussion and guitar. This gives way to post-apocalyptic, eerily quiet meanderings on guitar and clarinet, with soft-spoken vocal passages. All in all, a fascinating epic. "Idiomatic Interlude" is actually a pretty well-developed instrumental with odd rhythms and quirky clarinet playing, very soulful in fact. "Cyclation" rounds out side A, starting on another haunting and dreamy instrumental passage before the more traditional song form steps forward, with Charles and Stewart delivering a Hendrix Experience-styled powerhouse performance.

Side B of Apex is less impressive than A but still very good. "Zonation of Galactic Cosmodial Entities" is an effect-oriented but imaginative instrumental, while "Back Up!" is a soft of electric folk tune with the usual gracings of clarinet and decidedly weird lyrical subject matter (getting drugged, kidnapped, and hurled into a time warp). "Quest" is perhaps the most enjoyable tune on the album, opening with a guitar solo done to such high tones that it sounds like weeping. A somewhat symphonic and very emotional song. The wittily titled "7th Shakra" is a 10-minute instrumental, starting with a sinister verse/chorus before Charles Ostman abandons form and goes completely loopy on guitar and clarinet. Very introspective stuff. The one minus is that Charles throws too many solos on top of the verse/chorus.

I really have to rate At the Apex of High as one of the most interesting albums I've ever heard, despite the weak sound quality. It's clear the album had to be recorded on home equipment, with Charles singing very softly so as not to drown out the other instruments. Aside from that, I think the demo quality sound is in fact quite appropriate. This is heavily experimental stuff, and anyone who likes bizarre excursions should check it out: guitar freak-outs, mesmerizing clarinet, percussion romping, timorous bass, disturbingly odd lyrics -- Frolk Haven's sole album has it all, and all of it with clear plan and purpose at that. The only drawback is its rarity, so my first move would be to pester all the record companies to get this thing re-released; it's a classic! -- Robert Orme
(~evermoreblues) 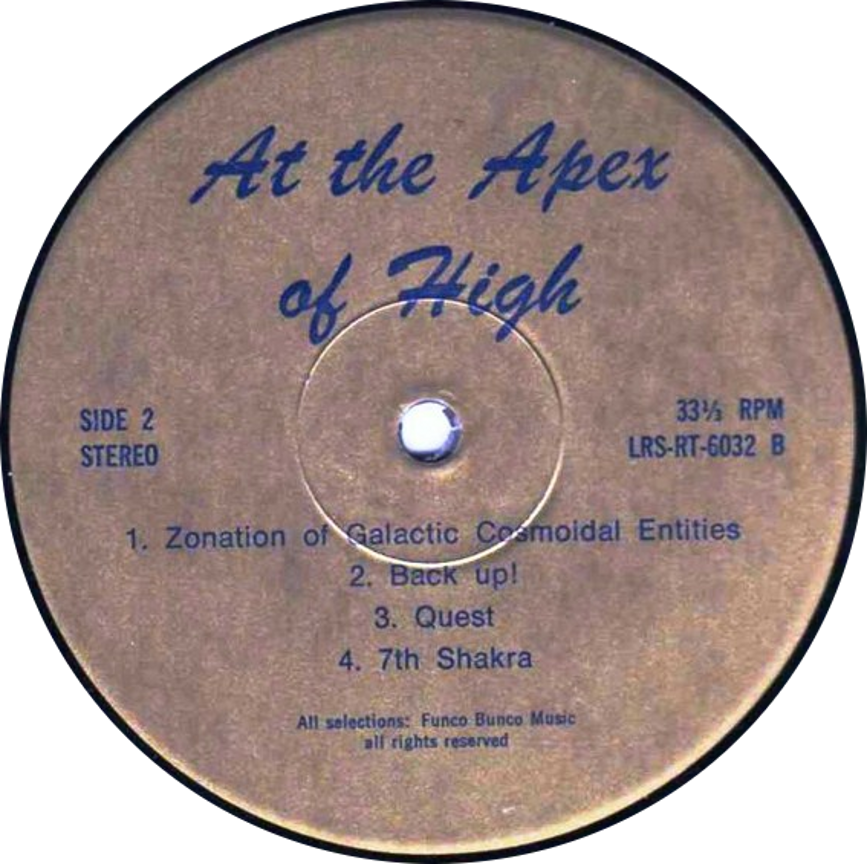 Tracks:
side one
A1. Oracle Of Delphi
A2. Idiomatic Interlude
A3. Cyclation
side two
B1. Zonation Of Galactic Cosmoidal Entities
B2. Back Up!
B3. Quest
B4. 7th Shakra