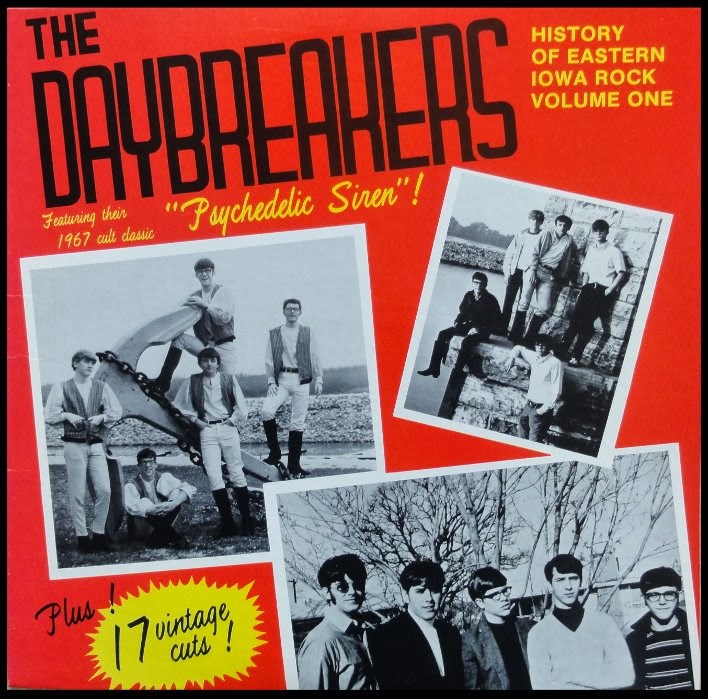 18 songs, including both sides of their single and lots of previously unreleased demos, most dating from 1967-68. This is more progressive in slant than the usual archival garage release, with influences from The Doors, Rascals, and "White Room"-era Cream harmonies. The sound of the original garage band era is strongly felt via Al Collins' Farfisa organ, which is at the forefront of his often minor-key compositions. Also includes four demos in a much breezier pop vein by Rox, and some crummy oldies remakes by reunion versions of the band in the late '70s and 1980s.
~allmusic by Richie Unterberger

This Muscatine-based band was formed in the spring of 1966 by Max Allan Collins, then a high school senior. Collins, an accomplished keyboardist, contacted George Dunker, a local high school guitar teacher, for help in finding other musicians for a combo. Dunker responded with names of three junior high students – Mike Bridges, Buddy Busch and Denny Maxwell – who he felt had the talent Collins was seeking.
The quartet with Bridges on lead guitar, Maxwell on rhythm guitar, Busch on drums and Collins on keyboard was joined by local garage-band veteran Chuck Bunn on bass and the Daybreakers took shape. Though Collins was lead singer, members shared vocal duties, a rarity in the mid-60s. With the XLs out of Wilton and the Quad Cities' Night People leading the pack, the Daybreakers worked their way up the local band circuit before scoring their first big break in November of 1966 when they won the Carnival of Bands competition at the Col Ballroom in Davenport. Max Collins still has the trophy. "They had around 30 bands from all over the Midwest, including Minneapolis and Chicago," recalls Collins, with some amusement. "We won because we did a very different set from everybody else. We did some steps like The Raiders and wore gold sparkle shirts!"
The Daybreakers got their shot at the big time in 1967 through Collins' father, who had once been a music teacher at Muscatine High School. One of his students had been Jack Barlow, a popular area radio personality and country western recording artist for Dot Records in Nashville. As a favor, Barlow asked his producer Buddy Killen to oversee a recording session for The Daybreakers, ostensibly for what was to be a locally-released record only.
At the Tree Publishing Company’s HQ, Collins played Killen six original songs, including a punky, snarling original number called “Psychedelic Siren.” The band had been performing the song live with a siren effect generated by a mysterious three-knobbed black box [a primitive version of a synthesizer built by a college classmate of Collins'] operated on stage by rhythm guitarist Denny Maxwell. Soon Killen gathered the young combo at the largest of Nashville’s celebrated Columbia Recording Studios where they recorded “Psychedelic Siren” and four other numbers, including guitarist Mike Bridges’ composition “Afterthoughts.”
The Daybreakers so impressed Killen that he offered them a three-year recording deal with Atlantic Records through its Dial label. In addition, the members were signed to five-year songwriting contracts. (The only other recipients of a similar deal were a Daytona Beach act called The Allman Joys who later became The Allman Brothers.) Though elated, on the way back to Muscatine the group experienced something that instinctively told them the music they'd just recorded might already be outdated. "We heard Jimi Hendrix and The Doors for the first time," recalled Collins.
Despite the band's self-doubts, “Psychedelic Siren” b/w “Afterthoughts” became a local hit on Davenport radio station KSTT in December of 1967 and stayed on the charts for over three months. The song became a regional hit, and continues to receive airplay on radio shows devoted to ‘60s garage band music, rediscovered by collectors upon its inclusion on the “Psychedelic Unknowns” anthology in the early '80s. The tune is still featured on at least six other compilations from the Garage Band era, including volume six of Sundazed’s popular “Garage Beat ‘66” series.
In early 1968, the band did a mini-tour in support of the single, opening for the Young Rascals and Gary Puckett and the Union Gap (two concerts in Davenport and one in Des Moines). The group also opened for the Buckinghams and the Strawberry Alarm Clock, and in 1969 won the Iowa State Fair Teen Town Battle of the Bands. Unusual for that era, the Daybreakers did quite a bit of original material -- major songwriters were Max Collins, Mike Bridges, Denny Maxwell and Bruce Peters.
Nonetheless, The Daybreakers' deal with Buddy Killen and Atlantic Records led to no further releases, as subsequent demo tapes (recorded at Fredlo Records in Davenport) were ignored and phone calls to Nashville from the group often went unreturned. Other members of the Daybreakers included Thom Hetzer on bass (who played on the Nashville session), Bruce Peters on bass and later guitar, Terry Beckey on bass and vocals, and Paul Thomas on bass and guitar.
In the early '70s the Daybreakers evolved into Rox, still under the leadership of Collins but with Peters dominating musically as they pursued a more pop-oriented direction that recalled the late-'60s Beach Boys and early Raspberries. By the mid ‘70s, Collins, Peters and Thomas returned with Crusin’, one of the first ’60s revival bands, which -- with various members (including Bunn and Maxwell) but always with Collins and, until his death in 2006, Thomas – has continued to this day. Peters and Beckey are also deceased, but their performances are warmly remembered by the thousands in Eastern Iowa who enjoyed “the Dynamic Daybreakers.”
~iowarocknroll 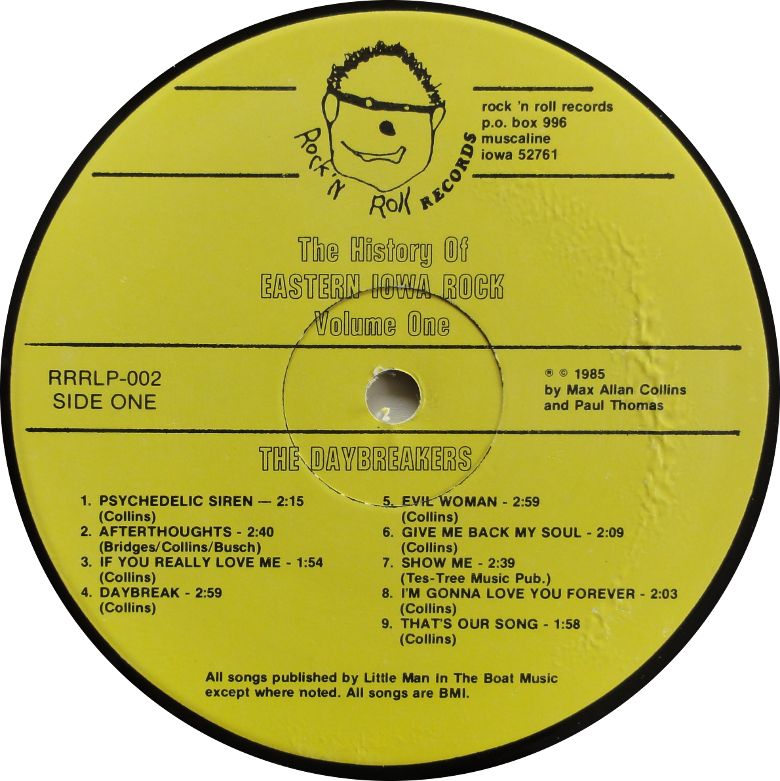 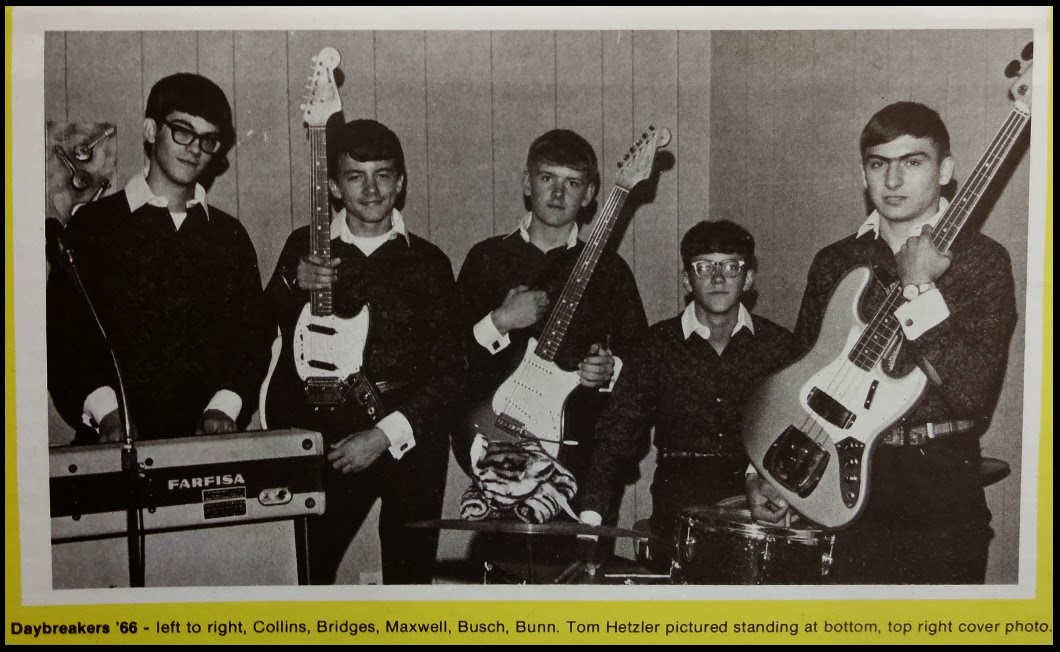