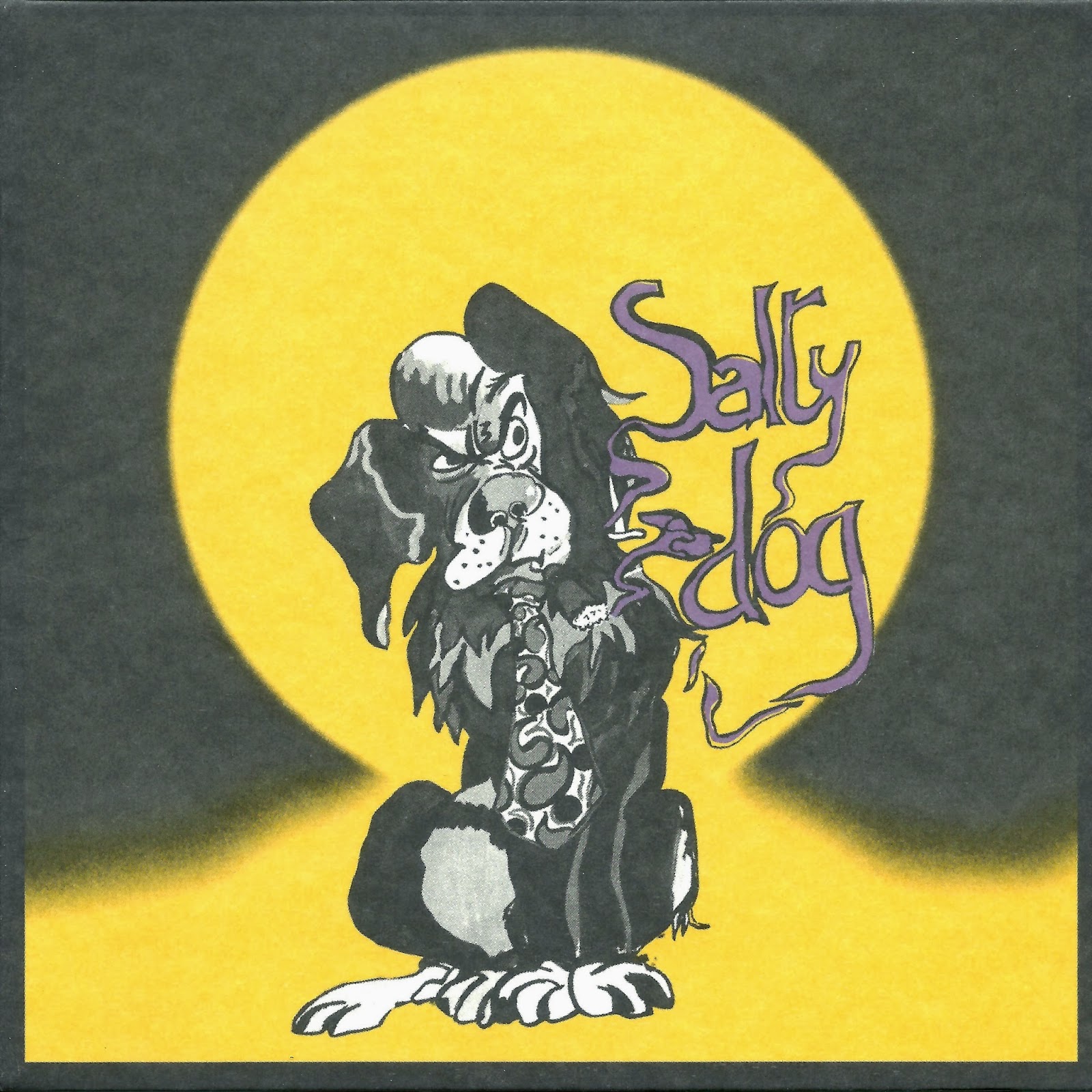 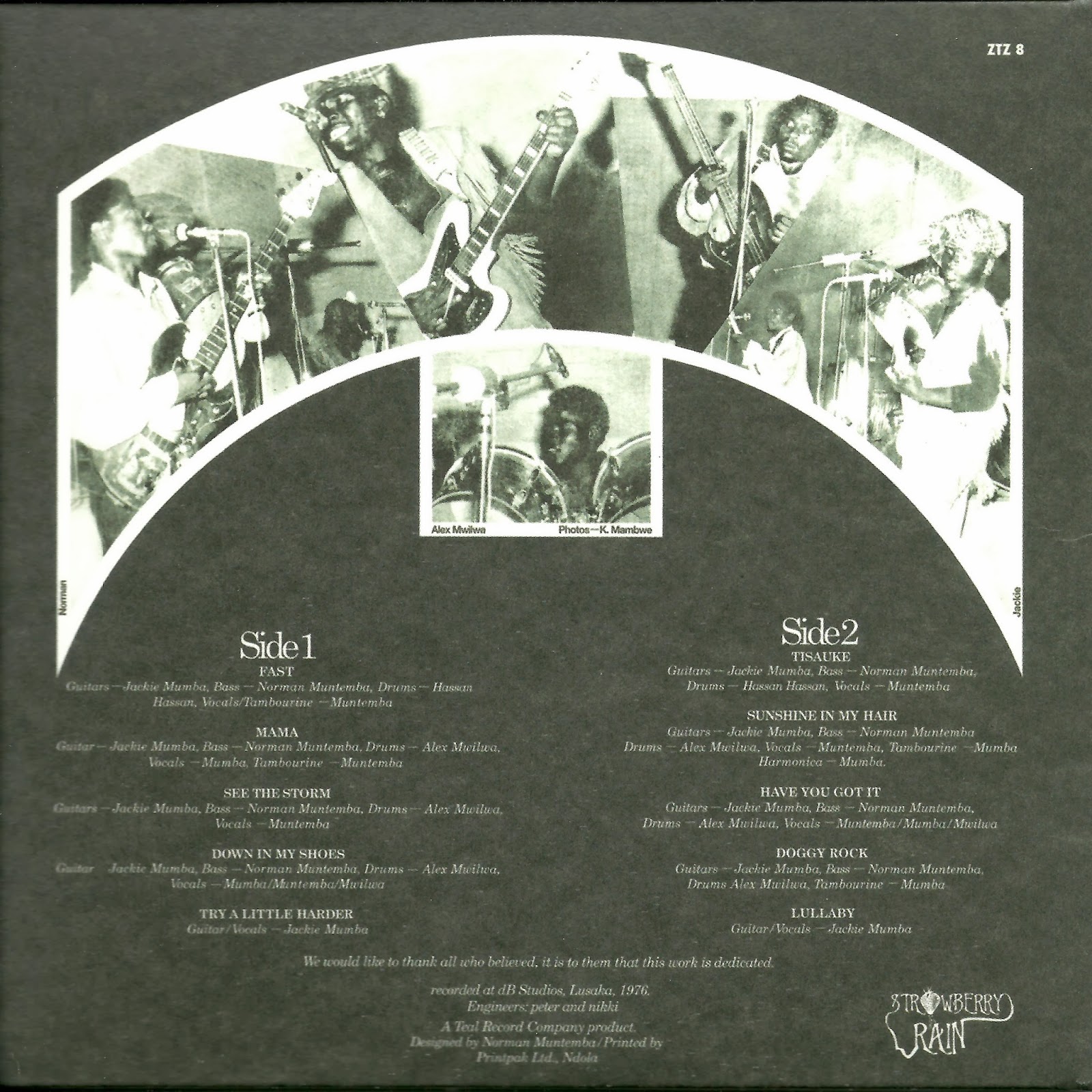 Salty Dog, like many other bands from Zambia, was an acid fuzz rock band. Recorded in 1976 at the private dB Studios in Lusaka, the self titled debut release was the eighth album released on the Teal imprint Zambezi.
Having already been together for six years, the band, who at the time were in their mid 20's, took a month to record the effort that contained all original songs.
Influenced by Hendrix, The Rolling Stones, Eric Clapton, The Beatles and locals such as Rikki Ililonga and Alick Nkata, the band relied heavily on their talented guitarists.
The forerunner to Salty Dog was a band called "Way Out Impression". This was a three man band consisting of "Jackie Mumba" on guitar, "Alex Mwilwa" on drums and "Norman Muntemba" on bass guitar. Jackie and Norman had grown up together since 50's, and had learned to play on homemade banjos.
"Way Out Impression" was a hard rock band modelled after The Jimi Hendrix Experience. Their music was a combination of original compositions and covers of rock songs. Prior to "Way Out Impression", Jackie and Norman were also members of a very popular boys school band called "The Invasions". They found local fame as the band was very popular, especialy in Lusaka where they performed at many venues.
During the period in which they formed Salty Dog, the band found themselves debating life. They wanted to give birth to ideas that would develop and change the lives of people... Touch them in a happy and positive way.
Steve Doran (a friend of the band) commented that sperm was such a force, and that Salty Dog was slang for sperm in some hip societies within the U.S. The band members unanimously agreed with excitement that Salty Dog would be the name of the group.
The band consisted of Jackie Mumba on guitar, Norman Muntemba on bass and Alex Mwilwa on drums. They also shared vocal duties and played other instruments on some songs.
The illustration of the dog was done by Trevor Ford, a British artist who came out to work and teach art in Zambia. He was a great friend of the band, and regrettably his work was not acknowledged on the album cover by accident. Norman, the guitarist for the band did the remainder of the design and artwork for the cover, since he was known for having created artwork for albums by Paul Ngozi, Zebby Tembo and Keith Mlevu.
The band found moderate success, but received a lot of airplay, and "Try a Little Harder" still gets spun on Zambian Radio today.
Their lead single, released before the album, was recorded during the album sessions and later extracted to create the 45. "Sunday Morning Sunshine" was left off the album while the flip side "Down In My Shoes" found its way on to the self titled LP.
The band stayed together for over fifteen years and recorded a second album that was released in 1980. There was not enough money in music during that period, and all the band members had daytime jobs that forced them to work in various towns. This resulted in few performances, and death of some of the members finally resulted in the end of the band.
Jackie and Norman continued to play together until Jackie's death in 1988. Norman is the only living member today.
It really is not difficult to appreciate Zambian rock bands like Salty Dog. I just wonder why it took so long for the Western market to discover them.