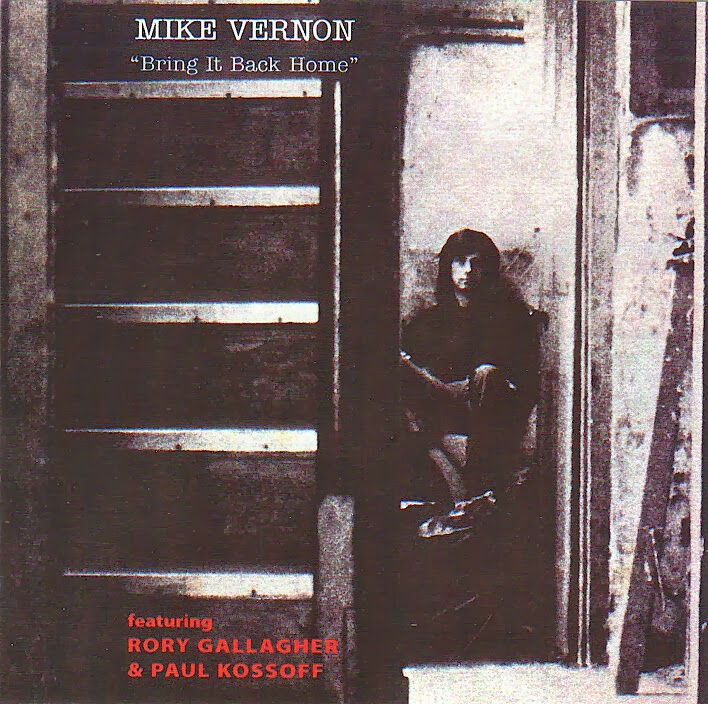 Mike Vernon was the leading producer of the British blues boom in the late '60s, working on discs by John Mayall, Fleetwood Mac, Chicken Shack, Duster Bennett, Savoy Brown, and Ten Years After. Several of these recordings came out on Vernon's own Blue Horizon label, as well as the lesser known Vernon-run labels, Purdah and Outasite, and Vernon also recorded some American artists for his companies. Although he's primarily associated with blues-rock and blues, Vernon has produced significant acts outside of the blues field as well, including David Bowie, Focus, and Bloodstone. After playing for a while in the Mo Jo Men, Vernon started working for Decca Records in 1963, entering production with an album by Texan blues singer and pianist Curtis Jones, and following that up with projects by better known American bluesmen, Champion Jack Dupree and Otis Spann. At a time when John Mayall and Eric Clapton had established their names live with the Bluesbreakers but had made relatively few recordings, Vernon encouraged Mayall to make an album with the Clapton Bluesbreakers lineup for Decca, which Mayall returned to after a brief sojourn at Immediate.

In 1966, Vernon was in the producer's chair for the only album the Bluesbreakers made with Clapton as guitarist, Bluesbreakers, which is roundly recognized as the best British blues album. There had been several other great blues-soaked British recordings prior to this LP by bands such as the Rolling Stones, Yardbirds and Animals, but all of those groups were indebted to R&B, pop, and rock as well as the blues. Bluesbreakers was almost all pure blues, bringing out some of Mayall and Clapton's best performances, sometimes augmented by a horn section. Vernon also produced the Bluesbreakers' only album with Clapton's replacement, Peter Green (A Hard Road). It was while working with the Bluesbreakers that Vernon became familiar with the musicians that were to become the nucleus of the most successful British blues-rock band, Fleetwood Mac, particularly Peter Green and bassist John McVie. Vernon produced Fleetwood Mac's first few albums and singles, including the hit "Albatross," and was on board for much of their most blues-centered work. Blue Horizon made a major mistake, though, and forgot to pick up their option for a second year on Fleetwood Mac's contract, which meant that the group left Blue Horizon in early 1969.

There was still plenty of work for Vernon at Blue Horizon and other labels during the late '60s. These included recordings by Ten Years After, Chicken Shack, Savoy Brown, and several other lesser lights of the British blues boom. As a major blues/R&B enthusiast himself, Vernon seems to have allowed the bands to pretty much be as they were in the studio. With the best of his charges, such as Mayall and Fleetwood Mac, this worked very well; they got to make pure blues, or experiment within and without the form if they wished, without the sort of interference that might have been expected from more pop-conscious big labels and producers. There was also a good amount of routine, or even boring, material by artists and players that could not compare to the Americans they idolized. Vernon did champion Americans as well, recording a wide variety of solid talents in both the U.S. and U.K., like Eddie Boyd, Furry Lewis, and Bukka White, as well as leasing sides for U.K. release by greats like B.B. King and Elmore James. Vernon himself made a solo album for Blue Horizon in the early '70s, with Rory Gallagher as one of the guest guitarists.

Vernon's importance to British music went beyond the mixed results he achieved in the studio. In a period of about four years, during which Blue Horizon had distribution from CBS and Polydor, it issued about 60 singles and more than 100 albums, most of them blues records. This was a time when blues records were not too readily available in general, especially in Britain, and Vernon deserves much credit for raising the profile of the music in general in the UK. A good way to get acquainted with Vernon's work and sensibilities is on the double-LP Sire compilation History of British Blues, which covers British blues from the early '60s to the early '70s. Vernon assembled this anthology, which is largely comprised of sides he produced. Vernon has not solely worked on blues or blues-rock recordings. In 1967 he was the producer for David Bowie's self-titled debut album on Decca. Oddly, considering Vernon's own tastes and Bowie's past background (in which he had often sung and recorded R&B), there was no blues or R&B influence on the LP, which found Bowie in the midst of his Anthony Newley phase. Indeed, the arrangements were very much in the orchestrated music hall style, although Vernon was not fond of Bowie's Newleyesque direction. In the early '70s, Vernon produced Dutch progressive rock stars Focus, moving into soul in the mid '70s with the American soul group Bloodstone (including their big hit "Natural High") and the Olympic Runners. Over the next couple of decades, Vernon maintained an active profile as a producer, although he didn't generate discs with the commercial or artistic impact of those he had overseen during the British blues boom. Generally, he kept his hands in the rootsy sector, working at various points with Dr. Feelgood, Chris Farlowe, Freddie King, Frankie Ford, and Jimmy Witherspoon. Outside of R&B there were projects with Level 42, Dexy's Midnight Runners, the Pasadenas, and the Proclaimers. He revived the Blue Horizon label in the late '80s, and in the '90s set up a couple of other blues-oriented labels, Indigo and Code Blue.
/skynfan.blogspot/