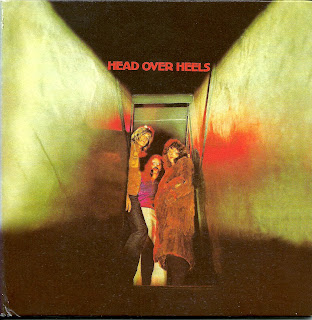 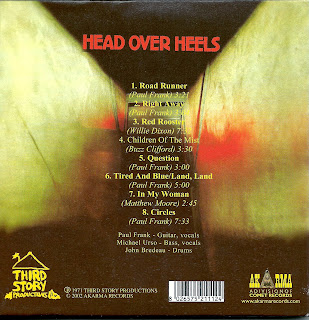 A Michigan power trio whose album is powerful and inventive - one of the best hard rock albums on the label. Showcasing a line up consisting of drummer John Bredeau, singer/guitarst Paul Frank and singer/bassist Michael Urso, the band only managed to release one instantly obscure album, but what an LP! Produced by Dan Moore and Buzz Clifford, 1971's Head Over Heels is simply great.

Loud, tough, yet surprisingly accessible, material such as Road Runner and In My Woman showcased the trio's knack for melodic, but crunching guitar rock. Frank and Urso had attractive voices and as we said before, they sure could generate some sound. Among the few missteps were some out of kilter harmony vocals (Question) and the bland power ballad Children Of The Mist (which was almost redeemed by Frank's nice guitar solo).
Elsewhere, recorded at Detroit's Eastowne, an extended cover of Willie Dixon's Red Rooster and the Franks-penned Circles were in-concert efforts that aptly showcased the band's impressive live chops.
Frank and Urso subsequently reappeared with the band Fresh Start. Urso was also a late-inning member of Detroit's Rare Earth (along with the Scorpion guitarist Ray Monette), playing on several of their albums in the mid-70s.