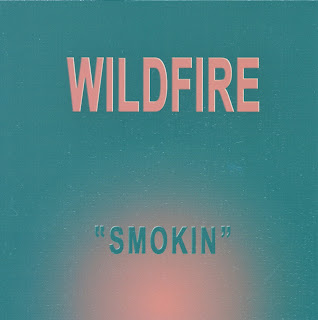 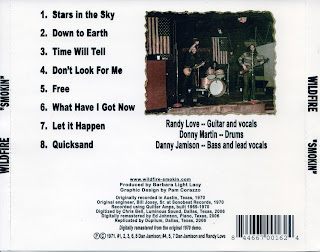 It began and begins again in California. Donny approached Randy and asked him to be in a band he was putting together. Randy agreed, although he wasn’t certain about the bass player or the singer.

The name for the band came about one night when the bass player’s younger brother, a child at the time, said, “Well, what about Wildfire?” Everyone laughed at first, because the suggestion came from a “little kid,” but then the laughter stopped and someone said, “Hey, that’s a really good name.”

One night Randy and Donny were playing in a band at an underground club in Huntington Beach. Danny walked in as part of the audience, accompanied by 2 chicks. At the break Danny said, “I like the way you play, can I jam with you guys?” The Sixties, the time of free love, of free music. Walk into a club today and ask the band if you could jam with them. Right!

Randy asked Danny what he played, and Danny replied, “bass, keyboards and vocals.” Randy thought that if this guy is any good, he could replace his bass player AND the singer. After the break, Danny got on stage with Randy and Donny and after Danny’s first note, history was in the making!

The main venue for the band in California was Finnegan’s Rainbow, a nightclub in Orange County owned by Syl Grove.

Soon after the association with Danny, the band began rehearing in a house on 19th Street in Costa Mesa. They had been together only 3 weeks when they were offered the opportunity to play an outdoor concert at the University of California at Irvine (UCI), headlining Lee Michaels.

There were 8 or 10 other bands on the bill, including Love, and Wildfire went on right before Lee Michaels. Thousands of people showed up, including people from Finnegan’s Rainbow. Soon after the show Wildfire was asked to be the house band at Finnegan’s, playing 5 nights a week.

After only a few appearances, lines formed around the block waiting to get into the club and hear the band.

Another memorable concert was at an obscure location in the hills above Laguna Beach known as the “Top of the World,” a remote spot available at that time only via a dirt road. Wildfire pioneered the concept of “word of mouth” advertising, and told a small number of people about the venue.

The band knew a man who worked for the Aliso Creek Water District, and he had the keys to all of the locked gates. Given entrance, the roadies set up the gear on a flat-bed truck with a 10kW gas generator. About 500 people came through the gates, settled into the beautiful valley setting, and the gates were locked once again.

The Top of the World concert stands as one of the epitomes of “peace/love/joy.” There was no violence. No arguments. No “hassles,” as they said back then. The audience was as much in love with the music as the boys were making it. As was fitting, the generator ran out of gas on the last song, the second encore, “Quicksand.”

There were rumors that the Orange County Sheriff’s Department personnel were outside the gates wondering where all that music was coming from, hearing the cheers of 500+ people from somewhere up on that mountain!

The Top of the World concert stands out in a series of outdoor concerts in Southern California. The Ortega Festival, the last outdoor concert Wildfire did in California, was much larger, almost 2,000 people, and the organizers were not ready for the crowds.

Wildfire played at the end of the day, and by that time, the venue had become a dust bowl, covering the guitar strings with dirt. It was the last outdoor venue Wildfire played until they came to Texas.

Prior to the Ortega Festival, Wildfire had played at the Merced County Fairgrounds, opening for Elvin Bishop and Santana. It was a typical county fair situation, with people from the surrounding areas coming to enjoy a day of county fair activities. The bands performed outside in the afternoon, and then were to perform inside a convention center that evening.

Wildfire created such a stir with their loud amplification and high-energy original songs that other more established bands were in awe of their musical power. Thousands of faces turned away from the main stage and started grooving on this powerful trio.

Ultimately, the name acts asked the promoters to cancel the indoor appearance of Wildfire, and as usual, money spoke. Despite the pleas of the audience, Wildfire was not allowed to perform that evening.

Wildfire had better luck with the Laguna Beach movie theater. One night Randy was walking past the theatre, right across from the beach, thinking that it would be a great place to play after the movies were finished.

He walked in and asked for the manager, who happened to be there, and told him of his idea. Several weeks later the manager called Randy and said that his theatre was about to go out of business, so he had nothing to lose by adding bands at midnight.

The boys of Wildfire were geared for the show and had friends doing the promo work. The place was packed and the crowd was on its feet by the end of the show. That single night launched a concert series on Friday and Saturday nights that lasted nearly 4 years. Jerry Garcia and other groups of international acclaim played there.

It was at this venue that Wildfire opened for Blue Cheer in the late 1960’s. The local attention paid to Wildfire assured that any name act would find a packed audience.

A Texas promoter heard Wildfire in Southern California and brought them to Austin to play a private concert at The Hill On The Moon, a 55-acre ranch north of Austin by the lake. Because they were so intense and so ahead of their time, they became an instant hit locally in the Austin area.

Austin is home to The University of Texas at Austin, and with approximately 40,000 students in the late 1960’s, it was the perfect place to live during the academic school year. The band returned to Southern California during the summer.

The boys loved the college campus, mainly for the beautiful Texas women! At one point, they lived at The Dobie, a high-rise, off-campus, co-ed dorm near the University. The Dobie had a “hippie theater” in it, and in exchange for a concert once a week, the boys lived free in the building for a while.

The Armadillo World Headquarters was a favorite venue for the band (www.awhq.com.) The October, 1970 concerts opening for Freddie King, brought Wildfire to the attention of more Austin music lovers.

The two-night stand was memorialized in a poster no longer available, but viewable on the website www.classicposters.com. Freddie King was not traveling with his own band, and Jimmy Vaughn’s band at the time backed him up.

Randy remembers that Freddie did not even carry extra guitar strings, and that on both evenings Randy had to give Freddie an e-string before the show.

At that time in Austin, the biggest draw next to Wildfire was Krackerjack. Krackerjack had a winning format – they wrote most of their own stuff and people could dance to their music all night long.

Charlie Hatchett, of the Hatchett Talent Agency, which is still alive today, booked them in and around the Austin area.

The band drew a different crowd in Austin when they played at Maggie’s, an after-hours coffee house near the Holiday Inn on East Avenue somewhere between River Street and First Street. People would stay all night at Maggie’s, listening to music and discussing Viet Nam.

Many a person who contributed memories to this history confessed a crush on Miss Maggie! We are still looking for Maggie. If you have any knowledge of how to find her, please send an e-mail to the band.

Wildfire frequently played at The Jam Factory in San Antonio, a club owned by Joe A. Miller. Here they opened for the Allman Brothers, when Dwayne Allman was still alive and the band was rocking.

Wildfire played at a Port Arthur surfing contest where the hotel would not let them check in because of their long hair. This performance marked the first time Donny was using Sparkle drumheads and they broke!

Headlined by Doug Sahm and the Sir Douglas Quintet, Wildfire played at the San Antonio Coliseum. ZZ Top was also one of the opening acts.

Another obscure venue where the band played often and to rave reviews was at Jim Marlin’s club in Brownwood, a small town in West Texas. A picture of them playing this club is on the CD release of the original demo album.

When Wildfire determined it was time to cut a demo album, they began in California at the Beach Boys’ studio, putting down the bass and guitar tracks. Wildfire guitarist Randy Love is Beach Boy Mike Love’s cousin.

There they cut a demo of original music, 8 power-packed songs of timeless rock and roll. Sonobeat owner Bill Josey, Sr. produced and engineered this demo album which, like all of Sonobeat’s classic demos, was released in a plain white jacket with hand-written numbers on white stickers.

According to Pat Quilter, “to my knowledge, this was the only recording of Quilter amps used at full power.”

In addition to the few copies given out in Austin, the demo was sold at Sound Spectrum, a record store in Southern California owned by Jimmy Otto at the time. Wildfire gave only 100 albums to the store, and they were sold out in 2 days.

The store begged fore more, and Sound Spectrum was given an additional 100 albums. They were sold out in a matter of hours, setting an all-time record albums at the store, per Jimmy Otto.

The authorized demo album has a white cover with an adhesive label. The label on the vinyl reads “Primo” and was drawn by Randy Love. Autumn Leaves and BMI were on the label.

While the internet sites mention that only 4 copies exist, we know of a few more!

There are 2 releases set for fall, 2006, both of which have been authorized by Wildfire.

A digitally remastered CD will be available through this website in November, 2006. Check here offen for the release date and purchase it through our store.

A vinyl edition of Wildfire's 8-song demo album will be released in November, 2006, by Shadoks Music. This I release was authorized by Wildfire and made in cooperation with the band. Go to www.psychedelic-music.com .