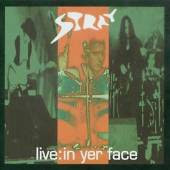 Yesterday I promised to put one row of mycosis bahiana in 4 position, simple thing in the case of mycosis

This Live wav can look comfortable on the net that does not exist.

The disc is already starting with irrretocable Come On Over, Take It Easy-Nature's Way-Only What You Make It-Houdini, ie, already bursting
But here comes the other type Time Machine, Suicide, Years, etc., that is to listen to from beginning to end without a break
The only problem is that the download is 1.8 GB and I resampled because the original sound is not great, and the covers, my scanner is in trouble, but there're what I got

Now Adamus67 Raw Material
our specialist from Poland (thanks adamus)
Stray were originally formed an amazing 45 years ago(1966) at a school in West London when four 14-year-old pupils decided to form a group. Calling themselves "Stray"This live album was recorded in January 2002 at The Robin Hood RnB Club in Brierley Hill, West Midlands, UK (and released in March 2003 by Mystic Records). There's no question that this is a live recording. While not exactly muddy, there isn't the same kind of sonic clarity as on a studio release, there being a very boomy bottom end. It's like listening to a well recorded, but not terrifically recorded, bootleg. It does give a bit of the "you are there feel," however.The set begins with a medley of songs that appear on the band's first, second, fourth and seventh studio albums; five of the remaining 9 tracks are from their 2001 release 10, being their tenth studio album. Their earlier material is fairly standard grooving rock, generally of the 4/4 variety. The first part of the medley "Come On Over" (from Mundanzas [1973]) transitions to "Take It Easy" (Houdini [1975]) so smoothly that it's not until the chorus kicks in that you notice the song has changed. There is a shift when "Nature's Way" (Suicide [1971]) takes over, as this piece is darker and heavier, as is "Only What You Make It," (Stray [1970]) which has a dash of punk energy to it. The medley closes off with "Houdini.""After The Storm" adds a bit of blues-boogie to things, this piece sounding like a lively version of "Crossroads," Bromham even sounding a bit like Eric Clapton vocally, though there's an acidic sharpness to his guitar playing that's a little spicier than Clapton's. There's a nifty little bass line from Bootle snuck in there, simple, yet it draws attention before being joined by a guitar solo from Bromham. "Time Machine" has a big sound that is vaguely reminiscent of The Who (think "Pinball Wizard"). The playing style of original drummer Ritchie Cole, who played on the band's first album (where this track appears) was apparently like that of Keith Moon..."Earth" on the other hand made me think for a moment of a blues-rock version of Judas Priest's "Livin' After Midnight." Bromham's guitar embellishments are a far cry from anything Priestly, however. Otherwise, this track is rocking rave up and Bromham truly quotes a snippet of the Stones' "It's Only Rock N' Roll" before launching into another fiery guitar solo. "I Believe It" is a chunky power ballad, that winds up being a little more proggy that one would expect, though in that near-proggy kind of way, by way of an extended guitar solo."The Rock" has what I call an expected anthemic drum rhythm ? boom, ba-boom, boom- boom, ba-boom, boom -- that to my ears is one part "Highway To Hell." While you won't mistake it for that track, once things get going, there is that same kind of energy. "Years?" is a bit different, at least initially, as it brings in a heavy, heavy metal rhythm and stomp to it, and yet the verses are phrased like those in "Midnight Rider" (Allman Brothers Band).Live: In Yer Face is a pretty good live retrospective of Stray's material. Even if it doesn't, seemingly, include all their "hits," it does give the listener a good idea of what this band were and are about ? heavy rock and plenty of it. The live feel reveals the raw energy of the trio, such that you can hear that the band had a good time. Play loud !If you like your rock music vital and loud, harking back to the days of Rory Gallagher, Cream, Wishbone Ash etc, then this album should bring tears to your eyes. Buy with confidence!