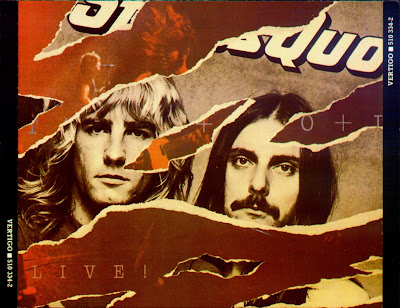 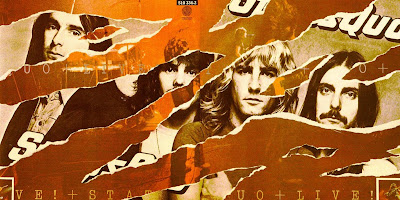 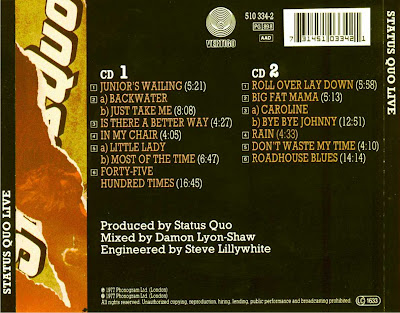 Resampled and Remastered by OldBitch
Ai putada, este deu trabalho
Partindo do meu original, eu refiz quase tudo
Os arquivos ficaram enormes, mas eu garanto que todo o trabalho que voces vão ter para baixar vai valer a pena
Um dos melhores cds ao vivo que eu já, da fase mais pesada do Status, isto é uma obra prima
Começando com Junior's Wailing e logo passando para BlackWater e logo is better way assim vai os dois cds, um clássico atras do outro
Então se prepare, pois os arquivos são longos, mas voces não vão se arrepender
English
Hey your Freaks
This cds give me a lot of work
From my original, I redid almost everything
The files were huge, but I guarantee that all the work you will have to download it will be worth
One of the best live CDs I have, the heavier phase Status, this is a masterpiece
Starting with Junior's Wailing and soon going to Blackwater and soon is way better so will the two CDs, one classic after another
So get ready, because the files are long, but you will not regret


Now the Raw Material of Adamus67
Our Specialist in Classical Rock From Poland
What can I say ....This band,is the pearl of the "British Crown"Status Quo are one of Britain's longest-lived bands, staying together for over 40 years. During much of that time, the band was only successful in the U.K., where it racked up a string of Top Ten singles across the decades. In America, the Quo were ignored after they abandoned psychedelia for heavy boogie rock in the early '70s... Status Quo lie the roots of London... a group of Spectres, whose members were Francis Rossi and Alan Lancaster. The band released three singles weakly adopted, before the changed style and started to play psychedelic rock, while changing its name to Traffic Jam. When released another single, which did not raise interest in listeners, , in August 1967 joined the band Rick Harrison, and the group changed its name again, this time to Status Quo.Status Quo is a true legend of rock music, not just the British. Plates sold the team in total circulation of 112 million copies, and in the Top Ten UK charts were as many as 22 songs Status Quo. The specific sound collage of blues, country and rock fascinates,already the third generation of fans, and rock-men are far from the transition of musical retirement...hehehe so keep gentlemen!Digitally remastered reissue approved by the band's official fan club! A UK No. 3 when first issued, this is a double CD which is now in the original concert running order time. Mercury. 2005.Recorded, with perfect timing, just as Status Quo hit their live peak, 1977's double album Live is, contrarily, a timeless reminder of just how much power and excitement was bound up in the band through the mid-'70s -- and on, in fact, into the early '80s. It would be several years before the group turned into the faintly embarrassing cabaret singalong that scarred the latter years of their career, a fact that Live broadcasts via a picture-perfect snapshot of the last calm before that particular storm. Touring to support 1976's Blue for You (U.S. title Status Quo) album, the band is still reaching back to the dawn of the decade for material. "Junior's Wailing" and "In My Chair" both date back to the tentative days of 1970, as Status Quo prepared to slide from psych to boogie without knowing whether there was even an audience for such a shock. The fact that there was, of course, would be celebrated with some of the most visceral singles of the decade. "Roll Over Lay Down," "Rain," "Don't Waste My Time," and, most impressively, "Caroline" all slough off well-loved 45s, to be transformed into veritable show-stoppers, while the LP epics "Forty-Five Hundred Times" and "Roadhouse Blues" receive marathon workouts that all but defy gravity. The mid-'70s were a golden age for double-live albums, and from Frampton Comes Alive to Thin Lizzy's Live and Dangerous, the era is littered with what now rank as classics. Status Quo's Live effortlessly takes its place alongside those most hallowed of halcyon howlers, and no matter what else the band might have become in later years, this is what they sounded like before that happened. Priceless.