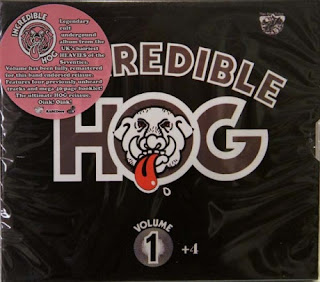 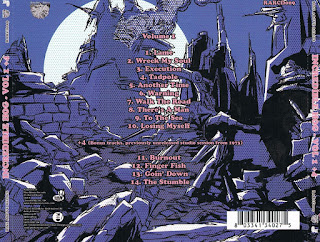 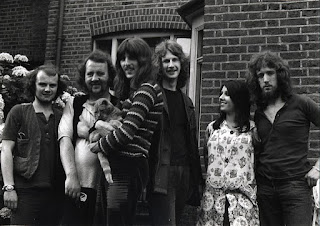 
Incredible Hog is a cult band for fans of underground British Rock and Prog of the early 70’s. Their Volume 1 album (originally released in 1973), has gone on be heralded as a cult classic of proto metal meets heavy glam/blues rock, with original vinyl copies demanding very high sums of money.

Rise Above Relics Records released this detailed reissue, which has been put together with the consent and involvement of the original band members. Featuring new and original artwork with many unseen photo’s and detailed sleevenotes (all 40 pages included here), this release is sure to please the most avid collectors of the period.

Fully and painstakingly remastered – the best news is that they have managed to locate the LONG LOST multitrack tapes for four unreleased tracks, two of which were intended for inclusion on the aborted second album – a Holy Grail indeed! These additional tracks just reinforce what a great band Incredible Hog actually were and how big they could/should have been!

This is edition is extremely hard to find on the net, especially in flac, so enjoy it!


BY ADAMUS:
Incredible Hog is a hard rock band from London, UK. They formed in 1970. Like so many early 70s bands, the three-piece London-based group Incredible Hog were a by product of the 60s British Blues Boom. In an attempt to mix melodic pop with heavy rock and intelligent, meaningful lyrics, guitarist/vocalist/songwriter Ken Gordon and bassist Jim Holmes, who'd actually been at school together and played in the band Speed Auction, formed Incredible Hog in early 1972, the name actually being a play on the then highly popular 'Incredible Hulk' comic book series....
Well, I had the German pressing of their only album, released by Telefunken in 1973, and before I had the chance to listen to that record, I felt attracted by the whimsical cover artwork. In contrast to the UK pressing, that artwork was more controversial as well as the one of the French pressing. The best, though, is yet to come. When he put the needle on the record, I was immediately struck by the powerful and hard rockin' blues of the opening track 'Lame'. That was exactly the stuff I was looking for. Raw, heavy and mean. But not only 'Lame' blew me off my socks. The whole record has virtually electrified me.
INCREDIBLE HOG plays energetic and tight and the clear vocals of Ken Gordon forms a nice contrast to the subliminal aggressive sound. Furthermore it's obvious that he has talent, leading to the fact that his expressive style is one of the band's trademarks. In conjunction with his strong guitar work, the band proves impressively what it means to be a power trio. In addition, it was rather uncommon for heavy rock bands to integrate samples into their songs, but in true pioneering spirit and a clear sense of aesthetics, INCREDIBLE HOG were successful. Last but not least, these guys were good songwriters so that 'Volume 1' is packed with remarkably strong songs. Not to forget about the killer riffs.
Unfortunately it is not easy to track down an original copy of 'Volume 1' today. As is often the case with rare records, there are a couple of bootleg CD's floating around, but the quality is not always the best. And of course, not everybody can afford the LP, especially because it has increased in value over the last two decades. It is all the more welcome, therefore, that Rise Above Relics have decided to re-release 'Volume 1' in cooperation with INCREDIBLE HOG. Both parties did a very good job on this CD which means that 'Volume 1 + 4' is like a wet dream for INCREDIBLE HOG fans like me. And that is not only because of the highly informative booklet but also with regard to the four bonus tracks. This is a previously unreleased demo that has been recorded in March 1973. These songs were intended for the second album which unfortunately was never released.
Mixed and mastered from the original multi-track tapes, these four songs show just how much the band had already moved on in terms of natural feel and stunning energy. They did not accept compromise for the demo recordings, particularly 'Burnout' and 'Going Down' impress me with their raw metallic energy. 'Going Down' was originally recorded by Stan Webb's Chicken Shack (it's on their 1972 record 'Imagination Lady'), and it's my favourite Chicken Shack song, but INCREDIBLE HOG's version has a more aggressive approach. It was a good decision on the part of INCREDIBLE HOG to unearth this demo and I'm pretty sure that fans of the band will love it. Overall, this is a great disc to add to your collection, whether you're an old fan or someone who has recently discovered this almost forgotten band. 'Volume 1' stands a little more on it's own than many other similar albums of the time. It's fat, dirty, and very heavy.