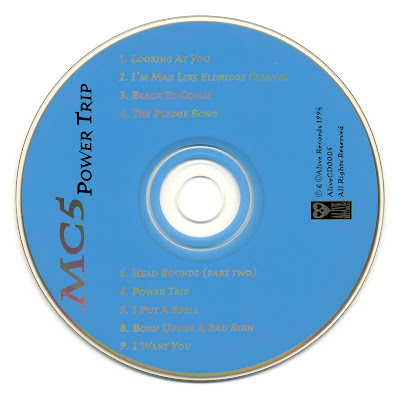 Many people condemned the MC5 never having a hit record
But in the case of MC5 who needs a hit record, they are
success for themselves and legend
This disc behind several songs in various stages, nothing audible, but mandatory for anyone who loves good rock and roll
All live, so without further comment, let down this pearl of the rock here


The MC5 had a promising beginning which earned them a cover appearance on Rolling Stone magazine in 1969 even before their debut album was released. They developed a reputation for energetic and polemical live performances, one of which was recorded as their 1969 debut album Kick Out the Jams. Their initial run was ultimately short-lived, though within just a few years of their dissolution in 1972, the MC5 were often cited as one of the most important American hard rock groups of their era. Their three albums are regarded by many as classics, and their song "Kick Out the Jams" is widely covered.


In the wake of the Detroit riots of July 1967, the group relocated to the nearby college town of Ann Arbor. The following summer, MC5 appeared in Chicago at the Yippies' Festival of Life, a rally mounted in opposition to the Democratic National Convention, and in the audience was Elektra Records A&R executive Danny Fields, who signed the band a few months later. Their debut album, the classic Kick Out the Jams, was recorded live at the Grande Ballroom on October 30 and 31, 1968; although the album reached the national Top 30, retailers, including the Hudson's chain, refused to carry copies due to its inclusion of Tyner's trademark battle cry of "Kick out the jams, motherf*ckers!" The controversy spurred MC5 to run advertisements in the underground press reading "F*ck Hudson's!" Against the band's wishes, Elektra also issued a censored version of the album, replacing the offending expletive with "brothers and sisters."


For a band that never had a hit record, the MC5 were a pretty well documented outfit. This is even more amazing considering that such things as board tapes and home cassette recorders were both in their infancy at the time of these-and other- recordings. This collection of previously unreleased material varies widely in quality (none of it studio grade, unfortunately, but nothing here is unlist able), featuring four live recordings from the band's Grande Ballroom heyday, three instrumental runthroughs and the band track to "Looking At You," the group's second single. The emphasis throughout is on the band's experimental jamming tendencies, heard to its greatest effect on the 18 minute plus free association blues, "I'm Mad Like Eldridge Cleaver," featuring the sax noodlings of the group's manager, John Sinclair. While the live version of "Black to Comm" is a nice addition to the group's meager discography, this is a collection better enjoyed by hard core fans.


One of the more interesting (if not necessarily the most essential) of the posthumous MC 5 vault plunderings of the '90s, POWER TRIP is a rag-tag anthology of concert tapes, studio rehearsals, and outtakes, with a healthy offering of the band's (today rather quaint) political rhetoric (thank you, Brother Wayne Kramer). The bulk of the album is dedicated to some of the 5's more free-form numbers, including a few open-ended jams (like "Black to Comm") that were staples of their live show but never recorded officially. There's also a stupendously heavy version of the blues stanadard "Born Under a Bad Sign," plus the title tune, an early workup of the 10-years-ahead-of-its-time punk/funk/free-jazz fusion they later renamed "Skunk (Sonically Speaking)."