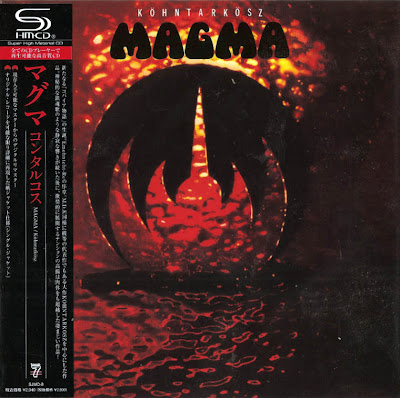 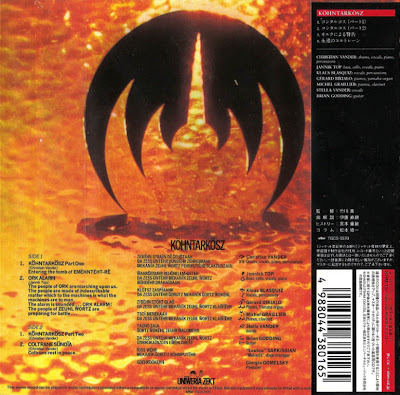 The lengthy, two-part title track of this album forms a section of the Kohntarkosz cycle. Although first in order of release, it has now been formulated as the second part in a trilogy consisting of K.A. (Kohntarkosz Anteria) (2004), and Ëmëhntëhtt-Rê (2009).

Kohntarkosz, though lyrically sparer than any other lengthy Magma composition, presents through vivid, atmospheric music the tale of a modern archaeologist who discovers the tomb of an Egyptian pharaoh, Emehntehtt-Re. Emehntehtt-Re had devoted his life to a spiritual quest to understand the intimate workings of the universe and gain immortality, and though he had advanced close to his goal, had been murdered before the final attainment was made.

The music of Kohntarkosz, Part I describes the entry of the archaeologist into the tomb of Emehntehtt-Re, and his advancement slowly along the dark passage of the tomb, where he hears heavenly voices and receives visions of the ancient pharaoh's life. These visions culminate when he reaches the burial chamber and disturbs its dust, which seeps into his pores and gives him in a flash a complete understanding of all that the pharaoh had accomplished.

Kohntarkosz, Part II describes the waking of the archaeologist from his vision and his subsequent efforts to recapture and complete Emehntehtt-Re's understanding. Although incomplete at the time of studio recording in 1974, Kohntarkosz, Part 2 was capped with a soaring finale in live performances, as can be heard on the 1975 Live/Hhai.

The Kohntarkosz album marked a change in sound from Magma's previous album. The absence of chant brings it closer to more conventional jazz fusion, however the heavy bass and dark, ritual atmosphere identify it as clearly a Zeuhl album. (from Wikipedia)