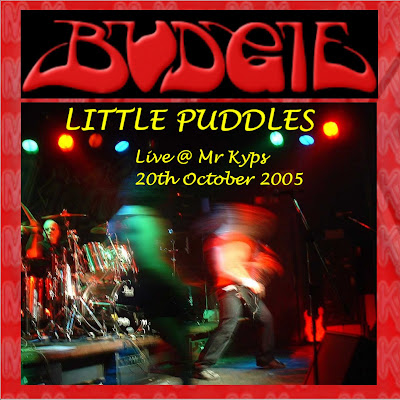 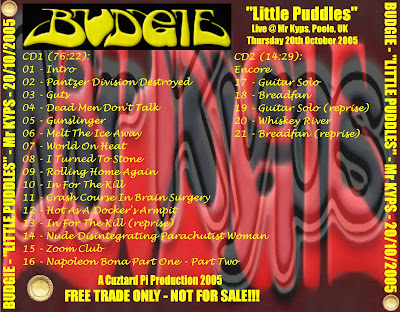 This double CD live here is fucking
I do not remember who asked, but gave to
Until very well written, has all the classic Budgie, and is required to download the rarity and quality of work


Now the Raw Material of Adamus67
Our specialist in Classic Rock From Poland
I would like to say .. Following the Budgie - "Little Puddles - Live"
Bootleg / Unauthorized originally recorded have traded copies of These tapes are a select group of Budgie fans over the years. (It's unfair That the members of the band do not get any royalties for These ... On the other hand if a quality bootleg CD is released, I think in many ways this is a bonus for the fans and in a roundabout way the promotion of Budgie.)
Undoubtedly, the had its designs and patterns were top shelf. Did not create the heavy-metal, but also led him to a higher level. Budgie not looking for success on the strength and perhaps because they did not find him. At least not disappointed. Many people going through life not for success, but for themselves, their loved ones, for the moments that give us pleasure. In the case of those closest budgie, it is also the fans. Their singles and albums are not hosted on the charts, but that team is still so passionate supporters? It is rare, although the band Budgie is quite understandable.
Since the beginning of what could quit playing hard-rock term. They were placed at one yard, but in the second line as Led Zeppelin, Black Sabbath. Memory is unreliable, but that's probably just because of two teams, Budgie and Black Sabbath, there was an ephemeral term metal-rock, then turned into a heavy-metal. There were still other terms for music Budgie such heavy-riff-rock. This is probably the most suited to them, as indeed they were masters of the riffs. This is the essence of rock. Dynamic, aggressive, full of temperament, a simple riff.
Budgie are 3-person group from Wales, where the decibel level is that when they listen....wall of my house,a heaving...and the headache my neighbors...Wales, fists and head in the walls of the my house..hihihi
Their music is a hard-rock in its simplest form.
Sound waves explode and fall cascades around until they fill your head and not leave it ringing. Group owes much to Led Zeppelin or Sabbath, but certainly are funky and have a lot of good ideas.Zero goodies, pure play, pure emotion. Respect for self, respect for the fans, respect for someone with whom they played. This was and is a Budgie.
Tracklist
CD1