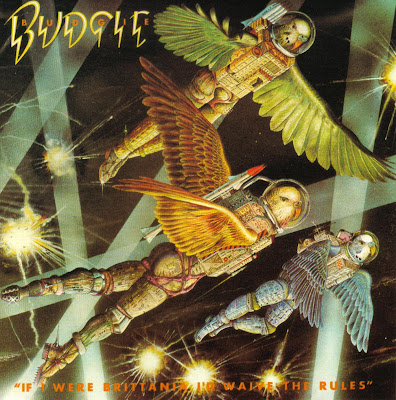 Where is this energy? disappeared? What happened? These questions until the pressure on my lips when I listen to If I Were Brittania I'd Waive The Rules. It's true you can not stand still, the changes are needed. Each team, in order to maintain size, must evolve. But you can not renounce to its greatest strengths!
On this album, Shelley and his colleagues are playing as if they did not want to play. As if somewhere lost the passion, enthusiasm, faith in the meaning of her own music. Or maybe you just tired of.  Either way, an escape from his own "I" did not give the team a successful asylum. Because if you can play the boogie (Anne Neggen) without verve, enthusiasm, roe. Is another turn in the direction of funky (title track) does not lead Budgie to in a blind alley?
Could it be?.. to infer from  that  that musicians began to run out concepts
Really strange a cocktail of inspiration that can only testify about the crisis team musical personality. parrot escaped from the metal cage and not really knowing which direction to fly, she began to digress..
Well, looks like Budgie are getting stuck in the transition period. And their stock of cool riffs is definitely running out, too, so no wonder Tony Bourge left pretty soon after the album's release - I'd probably leave, too, were I to find myself stuck in this kind of rut, releasing passionless product that's neither good nor bad, overwhelmed by screaming mediocrity. There's only so much Seventies hard rock that's gonna make the Great Cosmic Transition, and Budgie's seventh album definitely does not fall in that category.
For  the album cover accurately reflects what lies within,36:08  minutes of raucous rock and roll with  a pause for breath that got the dandruff flying and the peace signs flashing from me and my moronic teenage metal cronies in the early 80s.
Now, it's obvious that Budgie is simply a metallic feast from start to finish and even on the poorer tracks the lead work is never less than blistering. It injected a much needed adrenalin blast into Budgie increasingly staid material...
For me personally I rate this one as one of Budgie best. A world away from Power Supply's metal attack this album is melodic, varied and dare I say lightweight bar the odd moment but I love it, is ace hidden in the sleeve.
Trust me!!!

01. Ann Neggen
An 'again. Rock, in the middle oczwywiście guitar solo. Interesting passage from the plates of about 3 minutes, besides reproduction. Song of the infinite toil occupation, about the band, a treadmill, that's all tired and takes the necessary calm and reflection, if ... for the fans ...
02. If I Were Brittania I'd Waive The Rules
Hard rock. Heavy riff  horror builds as the mood of horror. Meanwhile, a team making climate change a funky rhythm. Terrible, but sometimes riff returns. In the midst of a slow-down and breath. The end of funky. Song without character, or rather many characters. Text can be summarized briefly, discard the rules, enjoy your life.
03. You're Opening Doors
Quiet recording, light, but less interesting, not because it is light. The rhythm section playing slightly in an atmosphere of funky. Text about two people, but it is difficult to guess the context.
04. And Quacktor Bureaucats
The band sound soothes touching on glam-rock. Text difficult to interpret. It's probably about the financial problems of the family. Some people lose, others get richer.
05. Sky High Percentage
Rock with an indication of glam , melodic a good riff. Interesting guitar parts. In the middle of a change of rhythm, of course. The text of the superiority of love over making money.
06. Heaven Knows Our Name
Introduction acoustic guitar only. Then move in a calm ballad, as usual, charming, very charming this time. Prominent melodic line. Nice guitar solo. The text is likely to touch the cosmos and human prey. Musicians dream is to have the opportunity to travel.
07. Black Velvet Stallion
More than 8-minute recording. It starts with a bass riff that quickly takes a guitar solo. Riff is simple and consists of the same four sounds. Good fragments, where both guitar riff played in unison. Bridges arrive at an interesting sounding chords. Intriguing guitar solos. The original ending, very uplifting. Track has its own atmosphere and is the most interesting on the disc. The text very interesting. One identifies with the virtual steed, the embodiment of purity, freedom, and all perfection.
links
https://yadi.sk/d/7oM_Zn8N5Ardc