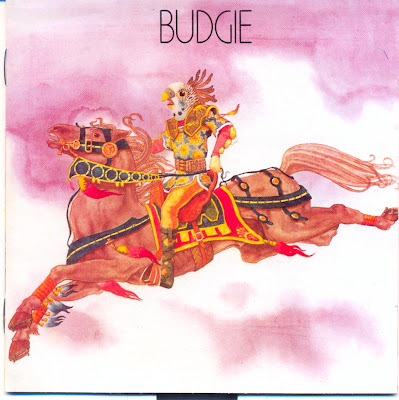 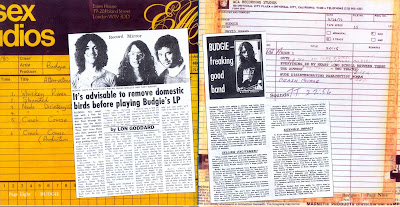 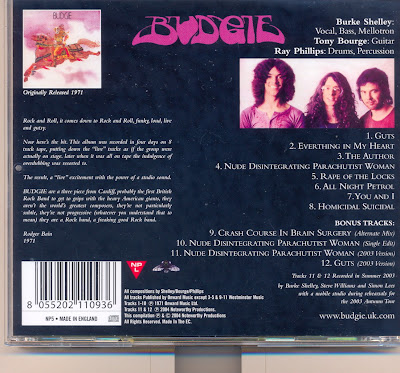 This was to be posted mid-week, but my health has improved, and I'm posting today
Considered a masterpiece, at the time was wronged
Now remastered in deluxe edition with three bonus tracks have to download quickly
Starting with Cuts and following with several classics and culminating with four bonus tracks, you have to download it here quickly
Even more than is in the original wav =original

So here we go

Budgie - Welsh group was formed in Cardiff in 1967 Formed composed of bassist / vocalist Burke Shelley, guitarist Brian Goddard, drummer Ray Phillips and Budgie named Droppings, contested by the pastor, the musicians who make available a room for rehearsals. (Apparently the band name is taken from the television series.) History, however, denied that himself Burke Shelley in an interview with Only Rock magazine in 2004. Reportedly, the group initially called the Six Ton Budgie. In later years, under the same name performed original drummer Budgie - Ray Phillips. Soon the musicians joined by second guitarist Tony Bourge, and Goddard left the group. Originally inspired by the achievements of the band The Beatles, but soon began to strive to achieve a stronger wording in the style of Led Zeppelin and Black Sabbath. It seems to me that the budgie does not define the genre, but it is moving and can therefore still comparing them to Led Zeppelin or Black Sabbath. A similarities can not fail to notice (or rather hear) the band still has a lot of their great and original compositions and it is thanks to them it is commonly believed that the only ones able to compete with the giants of contemporary heavy music. Personally, this is one of my favorite bands of those years .. very nice to admit today that Poland was the exception in this regard, while appreciating the team in a timely manner and extent, mainly through invaluable radio station"Troika" Piotr Kaczkowski.It's hard to believe today, but in 1982 a heavy rock band first broke the iron curtain ( was communism in Poland) and played concerts in my country, and in addition in Bydgoszcz my town, I remember this event well, the tickets were expensive, but people were so hungry the music, that tickets diverged in the blink of an eye. I' learned in school and not earning own moneygathered a large group of young people and started to push the fence, despite the police protection... got the batons on the head and in fact throughout the body, but managed to (not captured me ... I was faster than a hurricane ... hihihi)it was a great day ... . will never forget!Until 1971, he had an amateur status, performing in clubs in Wales. The breakthrough came when budgie recordings found their way into the hands of well-known producer Rodger Bain. Thanks to the band signed with major label and able to enter the studio to record material for their debut album. The album was recorded in 1970' Album called simply Budgie appeared in June 1971, the MCA Records. group effort was recorded in 4 days to live in the studio so. ośmiośladzie. He brought an interesting combination of heavy bass and guitar riffs and the distinctive high, somewhat infantile voice singer. Initiated the creation of common in Budgie kolażowych composition of several tempo and mood changes (here in the song The Author). Uniqueness complemented strange, humorous texts by Shelley and acoustic interludes. The album's longest track stood out, closing the first page of a vinyl album, which Disintegrated Nude Parachutist Woman (in late 2003 he recorded American Federation X syndrome with the help of the famous sound engineer Steve Albini). But despite the interesting material and good opinions of critics, the album did not gain too much popularityCD Released in 1991 and (July 18, 2006) Repertoire Records.Resumed (January 2004) Noteworthy ProductionsTrack list:01.Guts - 4:2102.Everything In My Heart - 0:5203.The Author - 6:2804. Nude Disintegrating Parachutist Woman - 8:4105.The Rape Of The Locks - 6:1306.All Night Petrol - 5:5707.You and I - 1:4108.Suicidal Homicidal - 6:41Bonus track:09.Crash Course In Brain Surgery - Alternative Version10.Nude Disintegrating Parachutist Woman - version Singles11.Nude Disintegrating Parachutist Woman (2003)12.Guts (2003)Burke Shelley - Bass Guitar, Melotron, VocalsTony Bourge - vocals, electric guitarRay Phillips - Drums, percussion

1) Guts
Composition Bourge / Shelley / Phillips, like everything on this record. Initially, the band sound like Black Sabbath. Riff is low, and so heavy. Vocals somewhat artificial, very expressive, anxious, uncertain. Instrumental parts are interesting, but the guitar solo is also afraid of freer solos. A song about the desire to understand and love in a partner. Why such a title? Probably the guy wants to hang on your partner and therefore has no eggs.
2) Everything In My Heart
Quick change of mood. The composition of the group. Curious, acoustic song. Burke of the vocals above the average. Text extremely simplified, the desire for love.
3) The Author
Introduction melancholy. Scorer Burke again. Great singing slow songs. After two minutes the machine starts to work. Burke, Robert Plant somewhat mimics. Guitarist produces blurred high-frequency sounds. The free and dynamic drums. Machine xylitol actually stops for a moment in the 4th minute to a minute to add potential rock and start a solo guitarist. Make the stuff up. It sounds interesting. The text deals with the relationship with a woman, quarrel and separation interrupted. As many as two mentions of ink in a single stanza. The first concerns the ink on the eyelids, the second ink pen.
4) Nude Disintegrating Parachutist Woman
Best riff combined with percussion. Walimy 3 times at random. Beginning under the influence of Black Sabbath. Burke fits perfectly this time in heavy music. In the middle dialogues and bass guitar solo in Zeppelin banter passing vocalist and guitarist. Around 3:30 sharp acceleration. After a minute guitar solo interesting from the beginning based on a constant theme, and then letting go of the reins fanatazji. The team forgives and releases somewhere a minute before the end, returning to the main riff from the triple blow of percussion. Definitely the best thing on the disc. The text deals with the feeling so strong that it materializes in the sky as a fugitive, a naked woman, covered in delicate garments, like a parachute. The figure, however, dissolves, it is totally virtual. Word of disintegration was then fashionable, talked about the negative and positive. Text very psychedelic, almost hallucinogenic, expressing ardent devotion. Possible reference to one of the works of Salvador Dali, lithographs Disintegrating Mother and Child. The word 'disintegrating' was abused by Salvador Dali and his paintings meant in the form of sudden disintegration of atoms, as if under the influence of a bomb explosion. Lithography presents the mother with a child, which disintegrates the horizon line. Perhaps the lithograph was the inspiration for the author of the text.

5) Rape of the Locks
The original entrance of the solo guitar, which was extended to 45 seconds. Then Budgie moving full steam ahead on the basis of recording the guitar riff and a dynamic rhythm section. The team liked the early manner of conducting vocal and guitar melody that same line. Around 2:15 to accelerate the pace of the guitar solo. From the fourth minutes to return to the main topic. A lot of rock. In the text, long-haired boy's dilemma, which does not accept that his girlfriend and her tear generalizes to the whole world. Song about frustacji caused by lack of acceptance of such minor detail, which are long hair and come to terms with this, podążaniu further their own way. A deeper look at the song is about intolerance, imposing their own tastes and someone forgetting that freedom is the highest category.
6) All Night Petrol
Heavy riff-based rock in the style of the group Black Sabbath. This time, Burke tries to pick up some manners Ozzy. From 2:30 guitar solo causing all the trouble. Burke then some screams. The text raises the problem of homelessness among young people, thrown out of the house as a result of generational conflict. The title phrase of the petrol station clock symbolizes the street life, life on dziejszym.
7) You And I
Another cutscene sound insane. Vocals with reverb. A brief history of compliance presented very romantic.
8) Homicidal Suicidal
Heavy, dynamic piece, a simple riff, guitar input dynamic and interesting. In the second part of the drum beats interesting enumeration from 1 to 6 Very good bass. A typical hard-rock. Burke exclaims seemingly disconnected phrases that describe an aggressive individual who leads a lifestyle balancing on the edge. He drinks, narkotyzuje is playing in the morning. Nieczego himself does not deny, but that someone else is in his eyes a bad character. Burke again, he copied an interesting feature of society. Homicidal Suicidal was copied in 1992 by the single Outshined Soundgarden, where he was a bonus track.
the end
Yours,
Adam