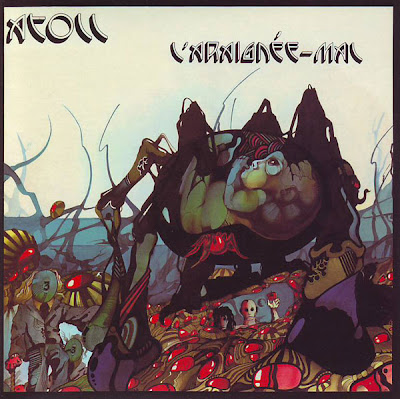 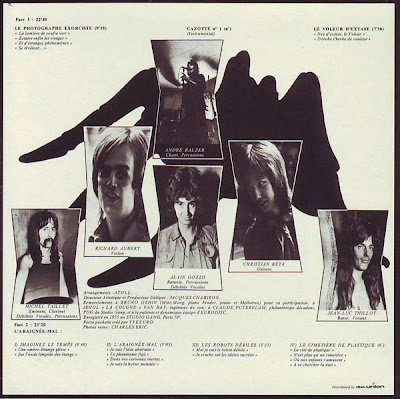 ATOLL was one of the brighter stars in the constellation of classic French '70s bands, and might be better remembered today if only they had been a little more productive. As it is, their reputation rests on only two albums produced over a five year period, the first of which was this 1975 release, in retrospect one of the pinnacles of French Progressive Rock and a highlight of the group's all-too brief career.
Certainly it's a dramatic improvement over their lackluster 1974 debut "Musiciens- Magiciens", with moments of real emotional power and instrumental urgency. The production may sound primitive by today's standards, and the mix is sometimes less than ideal (some of the solos are buried in a haze of dreamlike echo). But the music is undeniable ambitious, ranging from the romantic grandeur of "Le Voleur d' Extase" to the hair-raising nine-minute album opener "Le Photographe Exorciste, in which singer Andre Balzer's seductive whisper is gradually seized by an unearthly panic suggesting the more grotesque apparitions of an H.P. Lovecraft story.

Then there's the four-part title suite, a mini-marvel of passive/aggressive mood swings, from orchestral color to near-demonic pandemonium and back again. The track never once loses any momentum over its epic 21-minute length, and at the end of the final movement stops dead in its tracks, closing the album with all the finality of a pulled plug.

But what really elevates this LP above the pack is the addition of Richard Aubert on electric violin, giving the music a unique jazz-rock flavor lacking elsewhere in the ATOLL discography. A lot of heat is generated in his duels with guitarist Christian Beya, but make no mistake: this isn't genuine jazz-rock, however closely it may at times flirt with a fusion vocabulary.

I'm thinking of the track "Cazotten No. 1", a semi-improvised jam on which the rhythm section in particular doesn't sound entirely comfortable, although it may have been a question of studio inhibition. The Musea CD offers as a bonus track an earlier, live rendition of the song, with a guest saxophone player subbing for the violinist (who only joined the band a few weeks before the album was cut). The live version is twice as long, and played with an enthusiasm that apparently didn't quite survive the translation to the studio.

The album was a modest international hit (it was, if you'll pardon the expression, big in Japan), but that didn't stop the band from switching gears (again) for its next and last true Progressive album "Tertio" in 1977, and again two years later for "Rock Puzzle". It may have been a natural stylistic evolution, but the inconsistency didn't do their legacy any favors, especially since every next metamorphosis was in a retrograde direction.

The impression left by the exhaustive notes in the CD booklet is of a struggling young Progressive Rock band trying to find its voice amid the usual show biz frustrations of cancelled gigs, financial shortfalls, and an unstable personnel roster. This should have been their breakthrough album: the group even recorded an English language version several years later (quick translation: The Evil Spider), in a belated attempt to widen their appeal.

Thankfully, it was never released. But after nearly three decades the untarnished original can still be enjoyed in all its creative glory. (Neu!mann at ProgArchives)