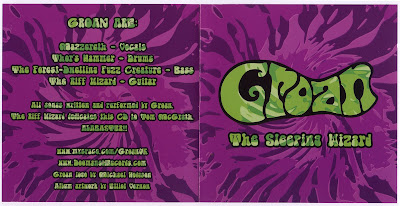 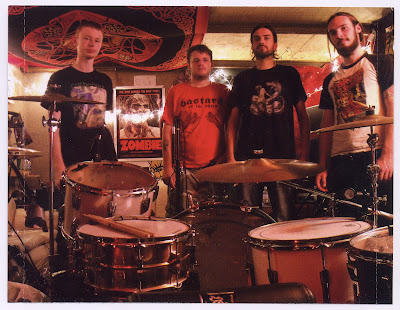 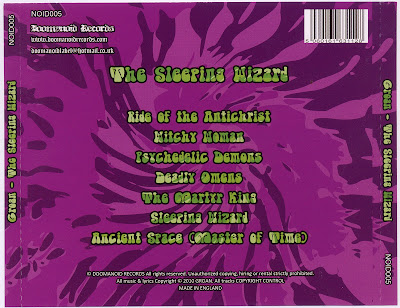 I discovered this english band by chance in the net, i downloaded, and loved it and ordered the original
Little known in the scene, the album is short, about 30 minutes
But all the songs are worthy of being heard with great attention
The vocalss are very similar to Bruce Dickinson, and the weight of the group mixes all these bands mentioned above, with a touch of Sabbath´s Master of Reality
Well, let this, the download is fast and fuck you (I'm going back to the old way)


Now the Raw Material of Adamus67
Our Specialist from Poland

Hi My heartfelt Friend
How good to see you in exquisite form!
(remember so you not pushed through ... hehehe)
Warning, Warning, Warning..... there is a new fuzzed out bunch of Stoner Metal warriors from the UK (Where Else!) ready to knock you in the dirt with pure 70's inspired riffarama and they are called Groan, not to be confused with the doomish, prog-hippies from Poland that are also called Groan. This album titled "The Sleeping Wizard" is packed to the brim with classic, warm organic sounds that are like they have been stuck in a time capsule since 1971 and finally they have been released. Amazingly this band started out as a one-man project of The Riff Wizard (Yes, That Is What He Calls Himself) and from what I can tell, the songs were so good they deserved an full line-up to deliver the sonic-goods so he enlisted the help of Mazzereth (Battlewitch, Trebuchet, Ratz Ass) to take the vocal role. Groan was made complete with the addition of Thorr's Hammer on drums and The Forest-Dwelling Fuzz Creature on bass (Great Names Guys). Not only is this musically straight out of 1971 but the production is also pure vintage 71' with tones coming close to Sabbath in an "Master Of Reality" kind of vibe.
Groan are not all about 70's Hard Rock worship, however, this album also has its fair share of Cathedral level heaviness and pounding, plodding sludginess a la Sleep. Thankfully they keep all these elements in limited portions and use them just at the right times providing every song with unlimited hooks. While the lyrics contain an certain level of "cheese", it is delivered in such a flawless manner, the cheese factor seems perfect and a required ingredient, after-all look at how many classic 70's rock albums sound cheesy now but you still love them, right? Groan's "The Sleeping Wizard" is one of those albums, a album you get completely lost in, a album you can turn up and completely forget about the entire world for the duration of the album and that is exactly what rock music was intended to do in the first place, pure escapism. The whole album is killer but "Witchy Woman", "Deadly Omens", "Ancient Space (Master Of Time)" are immediate "grab you by the balls" classics and if the riff in the title track doesn't have you rolling on the floor in ecstasy, then dig your grave NOW because something is seriously wrong with you. If there is something wrong with this, it is its too short, this album deserves to play forever but its so infectious, the time flies spinning this disc.
it will appeal to all "Rock Fans" but especially those who adore catchy Hard Rock with an sense of class and perfectionism. The guitar sound is heavy without being over-driven, the bass is beefy but without being low so you can only feel it, this bass you feel but you can also hear every note hit. The drumming is excellent, making every pounding hit count and then I come back to the magical vocals which easily sit alongside any famous Hard Rock vocalist you care to mention.
So I urge you to buy this album NOW!!!!!!!!!!!!!!