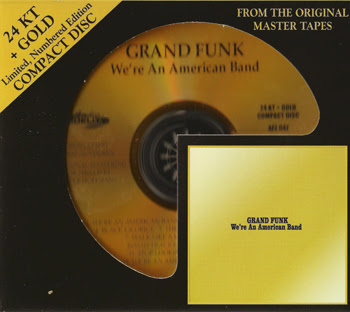 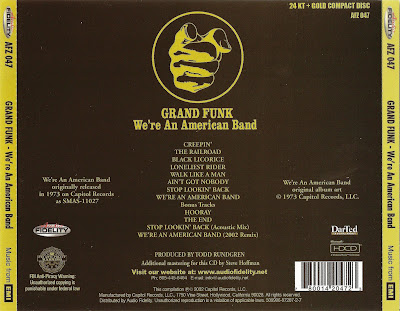 Clássico
Posted by Putaveia and
Adamus67

Hey our freaks, i'm back


And nothing better than coming back with a classic Gold Edition (High Fidelity), still with Bonus Tracks

One of the best bands of all time in a cd-raising by the ass, no sob to find fault, just to brighten up the weekend

Now the Raw Material of Adamus67
Our Specialist from Poland
Grand Funk Railroad with the team that involves a strange story, one can say very paradoxical, testifying to the fact that even the independent press is not able to be objective under the influence of emotions. Truth is known in some countries, is undergoing a renaissance.
The team worked 7 years, from 1969 to 1976. For most of this period, the musicians were downtrodden by the critics, fought by the record industry and deceived by manager Terry Knight. In such a setting created and performed. Wind in the sails did not stint them crowd fans. Thanks to the really big successes achieved commercial and artistic. Everywhere in the world in concert accompanied by their sympathy and understanding. Fans dubbed the nickname of the American team (American Band).
Grand Funk were a great team, but they were reliable in what they were doing. Pay people what they received from them, namely, positive emotions. The soul of the team was Mark Farner, who composed most of their repertoire. Thanks to him many hits were launched. Farner, always with a naked torso, he tried to guide the team wykierować generation. With his flowing life of the texts, calls the moral, political, and spiritual religion Christian message.
They played primarily a solid, dynamic rock. Besides a modest instruments do not allow breakthroughs in music entertainment. Certainly they were not the worst rock band of all time just as the Rolling Stone was never the worst writing music in the world .....
1973.07.02
Edition single, We're an American Band. # 1 Also in the UK.
1973.07.15
Album release We're An American Band. # 2 U.S.. In 1973, the group is expanding the keyboardist Craig Frost, whose first official album, it is this. LP Gold disc had before. The title track, finally broke the exploits of the teams wasted on the grounds of the charts and became the biggest hit of the team. Production of Todd Rundgren. Album released records were pressed on gold vinyl, called virgin vinyl. It was not a recycled vinyl, as black, which is recycled. There were 100 000 copies.
"Creepin '
Rock. Very mature song instrumentally and mentally. Farner gives vent to his political and social tendencies. I do not want to be a fool for those people who rule us.
'Railroad'
Rock ballad. Brewer begins to sing. Farner good guitar solo. Bodies are not as exposed as on the album Phoenix, but bring a lot of diversity to the sound on this album.
'Black Licorice'
Fast rock song for no apparent motive, which the team often happened in the past. Licorice is the name of a girl who, unfortunately, his being kidnapped.
'Loneliest Rider'
Interestingly, one of the best Grand Funk songs. It is wild and crazy. Indian accents.
'Walk Like A Man'
Rock. A classic and beautiful. Lively and sharp. Such is not now. Very masculine text, without podpuszczeń. Be a guy, come and talk manly step, like a guy. That's all it's not.
'Is not Got Nobody'
Rock guitar. This record goes back to that style. Someone in the band organ wkurzyły sleepers. You might guess who.
'Stop Lookin' Back '
Rock. Bodies back in the background. Farner did not give myself a blow grits. There is the situation. It's a bit of influence of black music.
'We're An American Band'
Song Brewer. And hit his baby. Rock. Przeszkadzajek much percussion. Text about the band, for the team and fans. It is we, the American team.

This is an anthem for all times. It just rocks out and makes you feel good anytime you hear it.