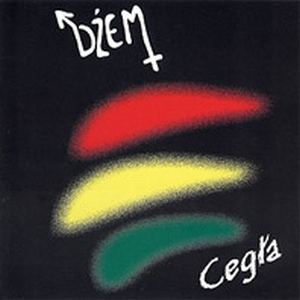 Post by Adamus67
Our Specialist from Poland
'Cegła' - the first studio album from Polish band Dżem, released in October 1985 by  label Polish Records. Recordings made in the Polish Recordings studio in Warsaw on January 28 - February 18, 1985. The implementation of sound - Krystyna Urbanska and Maria Olszewska. Cover design - it Miroslaw Makowski.  include classic songs which are not only in scale Dżem. It is a fascination with the music recording group members. In the individual songs you can hear different music genres. Blues is a style of songs,"Oh, Słodka"  and "Czerwony jak cegła", it works traditional rock  "Powiał boczny wiatr" and"Nieudany skok"  country - "Whisky" and reggae can be heard in the song "Kim jestem – jestem sobie". In the studio the album was recorded in batches, each musician recorded his part separately. This way of recording made that have failed to convey these emotions on the album, which was particularly noticeable at the concerts of the group. The success of this album undoubtedly influenced a long period of waiting for her appearance. It is worth recalling that the first big hit is a Dżem band, "Paw" were launched in 1981. Subsequent years brought the band the next big hits, but their first album was released only after four years. So when the songs from that period found their way on album,listeners were already very well known, mostly from concerts and radio broadcasts in part.
In Poland the year 1985 most probably associated with the disc just Dżem. A little on the album naczekali: the first single in 1981, then only the cassette with a concert from 1984, this official bootleg (CD came out as "The Day the sky broke"). And finally the debut album: recorded in a hurry, on the basis of each individual musician, not too familiar with the recording and mixing the music team (which was reflected clearly in the inserted disc). Despite adversity, she it very good album.
What we have on this "Cegła"? Songs from the early years of the band, including some absolute classics Dżem. A specific section for inspiration in the group. Grounds - this, of course, rock and blues. Plus the country and reggae. The album was not known from single, brilliant "Paw" - so the honor three-color color of weapons,"Kim jestem -. Jestem sobą"  Weapons quite well, though it's a song about a class worse unfortunately. Country-rock - it's obviously a team evergreen, or "Whisky". Just as "Czerwony jak cegła"  - Dżem classic, one of the most famous songs of this venerable group. "Czerwony jak cegła"  is a pure example of the style already Dżem: stones distinctive riff from school, to develop cool, stylish exchange of two electric guitars, distinctive, loose, but the emotional vocals of Richard Riedla. Typical rock tinged with blues have a "Boczny wiatr wiał", "Nieudanym skoku"  (inspired by Queen, "It's Late") and "Jesionach" (with music first drummer, yet the turn of the 70s and 80s - Leszek Falińskiego). More of the blues is in the final composition. "Oh, słodka" is the jewel of this album, and his great culmination. The perfect example of how to construct a rock song. Just listen to the piano and guitar relationship: when it is needed - in contrast with each other, as when the madness Paul Berger guitar playing a simple piano party to prepare the listener for the final, with the guitar explosion Styczynski, when necessary, cooperate nicely. (By the way this song is heard, which are excellent musicians, Paul and George. Berger game sometimes quietly, subtly, sometimes - in a way even a little percussion, strong; Styczyński famously parties from developing its peaceful start after a strong finale.) And how beautiful it breaks down the tension in this track! Although the first hearing, it appears that this simple bluesrockowa ballad. This title is more fit to - nomen omen - "Ballady o dziwnym malarz" where the number of combinations of instrumental and mood changes is smaller. But the effect as successful.
Despite the poor sound, a bit of strength attached sound effects - after 25 years of plate defends himself very well.. Delving into the tradition - blues, early Clapton, Allman Brothers Band, The Rolling Stones, Wishbone Ash, country, reggae - gave a very fresh, interesting effect. Well, this charisma Riedl: if not for his lyrics and his way of interpretation, this album would be much poorer. Maybe a little pity that some of the best songs from that period - "Paw", "Dzień, w którym wybuchła niebo", "Mała Aleja Róż"  - just went for singles.