Budgie - In For The Kill - Remastered - Plus 4 Bonus Tracks - FLAC 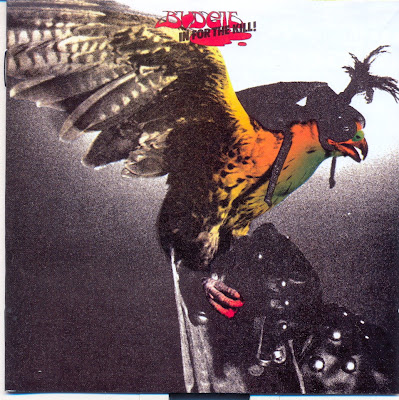 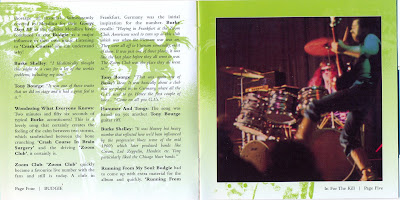 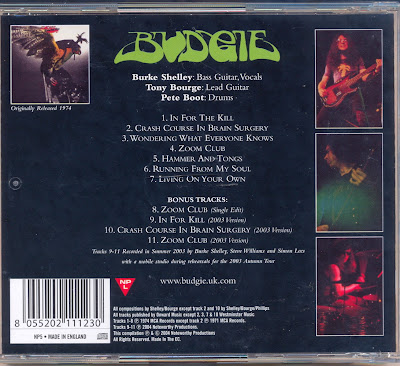 Since you liked the Bandolier, here's In For The Kill
In my opinion one of the greatest classic rock, and a drummer named Pet Boot I never saw, but broke this record
Comment best music is pure nonsense, even more with bonus tracks
Then your sobs  download and have fun

I'm going to Sao Paulo tomorrow and just come back on Saturday, it might take for me to respond to feedback


Now the Raw Material of Adamus67
Our Specialist from Poland
Released in 1974, the brilliant fourth album - probably the most difficult title in the band's discography. The album contains such excellent title track, released on the debut single (even in 1971) Crash Course In Brain Surgery, rolling like a runaway roller, a 10-minute Zoom Club, evidently modeled on Dazed And Confused is hard, very rock and guitar, for ten minutes is amazing - super strong, catchy riff, a long solo in the middle of the song, singing passionate, addictive and a lot of bass pounding the drums. Just something incredible! I think it's one of the best songs of all time hard rock
Hammer And Tongs and hardprogresywny Living On Your Own. In addition, Zoom Club mix singles and three songs in new versions
'In For The Kill'
An interesting introduction to the transition to guitar heavy rock riff-based course. After the singing of two verses interesting effects of distorted guitar. Then complete change of topic. As if the band went in a completely different song. In this section, dominated by guitar solo. Burke is barely audible in the flood of sounds. Now the situation is reversed. After the bridge of the guitar effects, the band returns to the main topic. Burke sings again with the first two stanzas. Composition Bourge and Shelley.
'Crash Course In Brain Surgery'
The composition of the three. Rock, a good riff, sharp dynamic number. Burke's texts are more difficult, and sometimes little understood. Team members said that only Burke knows what it really is. It's not knives or lancets pierce my brain, but the words, cutting words. I have to get rid of these blades but it means that I end up with my love. You must do this quickly, so the line cuts during brain surgery. A charming piece of 'The Baby ...' can be compared with the song How Many More Times, 1st album of Led Zeppelin (5:30).
'Wonderin' What Everyone Knows'
Acoustic cutscene, super. Zadurzonym song about a man who sees nothing except his love. He senses a loss, the distance to the environment, even alienation. The composition of Shelley and Bourge.
'Zoom Club'
Composition Shelley / Bourge. Failed hit singles, too heavy to hit. The text deals with the club for American soldiers and a team that smash the walls tonight. Zoom Club was a club in Germany where they played a few times a budgie.
'Hammer And Tongs'
After a busy first psychedelic sound effects and percussion cymbals, the team proposes a rock in the style of Led Zeppelin. Burke, Robert Plant imitation. The recording is the blues. At the end of even a very blues. Time to convince the woman to come down the road fighting, put down the hammer and pliers (obviously a metaphor). How do I convince her about good intentions? The composition of Shelley and Bourge.
"Running From My Soul '
The composition of Shelley and Bourge. Rock and roll with perfect guitar solo. The text of the proposal for women.
'Living On Your Own'
Nearly 9 minutes. The composition of Shelley and Bourge. Unusual rock for a budgie. From the beginning of a nice guitar motif. Burke sings quite differently than before. After the third minutes the music stops and the guitar solo mimics the circular saw. Group rebuilds on major wkomponowując him marching to the beat. The rhythm changes at 6 minute, but the theme remains the guitar. Burke, chanted the text again. Interesting video with a progressive character. The text of his own way of life with all the lights and shadows. Would you like to have everything, but do not get, because to be on his not so easy.
There Remains only the fast Beating Heart. Uff!
Excellent album for all lovers of good classic rock! This was a great time Budgie.