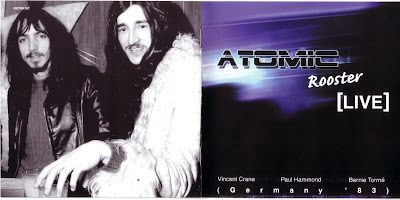 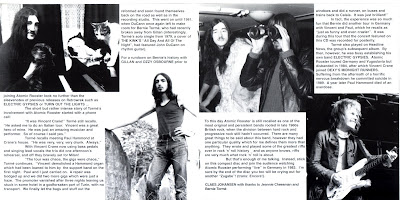 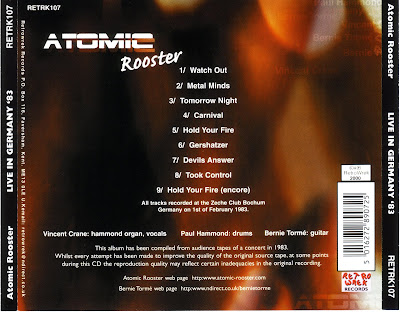 Hey your Freaks
If you have a band I like is the Atomic Rooster
This disc is totally live chipping, not only for historical value, but by the performance of the band
The recording is not perfect, but it 9
So Enjoy


Now the Raw Material of Adamus67
Our Specialist from Poland
Oh yeah, are my fave band for years
The idea of ​​the band was among the musicians akompaniujących Arthur Brown. The organist Vincent Crane and drummer Carl Palmer decided to jointly establish a new team. Trio was founded in June 1969 under the name Atomic Rooster in the composition of Vincent Crane (keyboards, mainly organ), Nick Graham (bass, guitar, flute, vocals) and Carl Palmer (drums).
Later that same year in November, the group went to the Skin Alley multi-instrumentalist Nick Graham. He was replaced by guitarist and vocalist Johnny (Du) Canna, who previously played in such groups as The Attack and Andromeda. In this lineup the band recorded the album Atomic Roooster.
In June 1970, Carl went Parlmer, who along with keyboardist Keith Emerson and vocalist, guitarist and bass player Greg Lake'em co-founded a new virtuoso trio Emerson, Lake and Palmer.
The group was replaced by Rick Parnell, son of orchestra leader Jack Parnell, but two months later in its place came Paul Hammond. This composition he recorded the album Death Walks Behind You, which is reaching up to 12 places on the list of most popular albums, was the most successful group.
In June 1971, the band became a quartet when it was supplemented by enigmatic vocalist Pete French. This quartet released their third album In Hearing of .... Just before his manifestation in the market left guitarist John Cann and Paul Hammond for the quartet Daemon. Later, as the trio performed under the name 'Bullet and Hard Staff. When, after a heavy car crash, the group broke up - John Cann went to Thin Lizzy.
Crane accepted the new musicians: guitarist Steve Bolton, and drummer Rick Parnell again. By briefly played in a band bassist Bill Smith.
When in December 1971, departed from Atomic Rooster Pete French (Cactus group), in its place came one of the best British singers - Chris Farlowe. He was previously lead singer of the famous Colosseum jazzrockowej group. This quartet released the album Made in England.
In December 1972, guitarist Steve Bolton left and was replaced by Johnny Mandala Babylon team. Atomic Rooster solved in 1975 after the release of the album Nice 'n' Greasy. Johnny Mandala John Goodsall already founded a famous band Brand X.
Vincent Crane began to create music for radio and theater. He participated in music programs for children. He was also music director of the Rain Dog Stomu Yamashta's Red Buddha Theatre Company. Reactivated as a jazz-poetry performances from Paul A. Green. In 1978 he again teamed up with Arthur Brown.
In 1979 there was a reactivation of Atomic Rooster, guitarist John Cann was again a new drummer Preston Heyman.
After his retirement in 1981 he played the drums Ginger Baker, later replaced by Paul Hammond again.
In 1983 the band was guitarist Bernie Tormé. From time to time on the guitar played by David Gilmour (Pink Floyd). Some sources say that since June 1983, the group still performed as a singer Jean Crane and John Field on percussion instruments. But it was the end of the band.
Vincent Crane from 1984 to 1987 he played in the group even Dexy's Midnight Runners