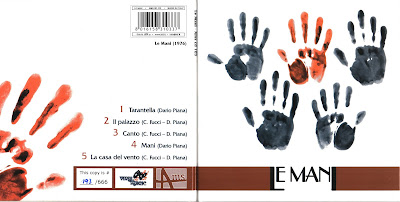 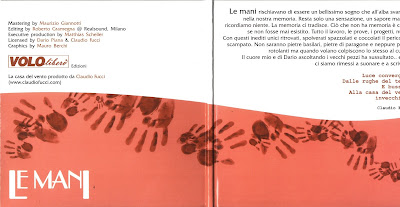 Le Mani was a progressive Italian group from Milano formed in the early 70s which featured as some of their members Claudio Fucci, who was also pursuing a solo career after having released his first album two years before, and Dario Piana, who would soon become an art director. The band has never released an album by the time they were active, they've just recorded some tracks in studio and that were finally released 30 years later on this album.

Their style is quite similar to other Italian bands from the same period, besides some English bands such as Jethro Tull and Emerson, Lake & Palmer. In despite of their influences, their style is noteworthy and had its peculiarities. A great sadness that this band had no future, just like many other ones.


Now the Raw Material of Adamus67
For more than a week of watching this post and somehow no one comments on this mini-album EP.. a pity ...
Formed in the early 70's. It was a classic Italian progressive band playing music also typical of the Italian symphonic rock trend that is based on the piano. Because it represented a very high level, probably all played at festivals in this period, opening concerts of the great stars of the type of Banco and PFM. Even began recording their first, their debut album. Began - this is the right word. I never finished. Ignored by record companies (!!!), concerts tired, disappointed the music market ,ceased to exist.
Another excellent Italian group from that period, which only flashed for a moment .... The world knew about them, family Italia quickly forgotten ... It's been years, even centuries, and appeared paramount Label Vinyl Magic ... Dug up in dusty old archives of the old tape .. Little of this was only 18 minutes. But the level and quality of the Heads of companies have made such an impression that the instant decision was made to the publication of the plate. And so in 2006, appeared on the market, the only album so far, and actually mini album Le Mani.
Instantly came out in Japan and made a sensation among our eastern friends ... That's 18 minutes of music shows what a jewel we have lost. It's beautiful, symphonic rock keyboard where the function took guitar flute and saxophone. Traditionally - as with the Italians - the keys of at least Emerson and fantasy section ... Beautiful music. Opening of the great - 'Tarantella'-trzyipółminutowa perfect gem of the classical flute (a little style Camel'a) and rozszalałymi hammondami. Great melodic lines and the level of the game are reminiscent of Le Orme .... wonder! Next 'Il Palazzo' - as if the continuation of that there is an excellent saxophone first, then vocals. Also perfect. The third track is 'Canto' - musically maintained in the same style as the previous one, and the vocals - a bit in the style of Anderson (Yes) .. Another diamond is 'Mani' - solo piano - miniature short, fabulously beautiful, and at the end of 'La Casa del vento' - a beautiful ballad for voice, piano and flute ... And that was the end. The silence that is dawning on the last fragment until it hurts ... So much had been saved from the darkness of history .. Who knows what would happen to somebody gave the group a chance to finish the album? have joined the Big Three? They had a predisposition ... The album is very hard to come by, except that it only 18 minutes of music, but still highly recommend it to all lovers of antiques, and for lovers of old carrots - duty!
Enviar esta postagem
Marcadores: Le Mani