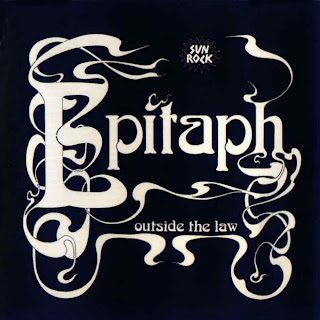 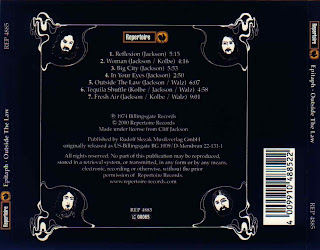 Entering the area of ringworm (micose), here's another one of the first Krautrock

I really like this band, then, have fun with this one more lowering quality of original


Now the Raw Material of Adamus67

British progressive heavy rock bands like Deep Purple, Black Sabbath, Uriah Heep and Led Zeppelin inspired many young bands in Germany. The Germans usually preferred to use English lyrics, and several bands, like Blackwater Park, 2066 & Then and Epitaph, had British vocalists! Epitaph were founded in Dortmund in 1969, consisting of Cliff Jackson (vocals, guitar), Bernd Kolbe (bass, mellotron, vocals) and Jim McGillivray (drums). The first sessions for their debut album, released 1971 on Polydor, were recorded in an Essex studio in England. For unknown reasons, it was however finished in Windrose Studios, Hamburg, where a fourth member was added to the group: Klaus Walz (guitar, vocals). The five resulting tracks sounded similar to the groups mentioned above, and particularly the earliest incarnation of Uriah Heep. Epitaph's Cliff Jackson didn't attempt to copy Byron's operatic vocal style, though. There were both fast rock'n'roll numbers and slow ballads with mellotron textures, usually in the 'heavy progressive standard song length' - from 5 to 7 minutes.
In 1972, Epitaph recorded their second album, "Stop, Look And Listen" in Audio Tonstudio, Berlin. This album also contained five tracks, stylistically similar to their first offering. Both albums are recommended for fans of the heavy progressive genre. In early 1973, Epitaph released two non-LP singles on the Polydor subsidiary Zebra: "Autumn '71" coupled with "Are You Ready" (2047 003) and "We Love You Alice" coupled with "Paradise For Sale" (2047 005). After this promising start, it seems as if the band was promised a bright future by the newly founded American record company Billingsgate, that they eventually signed to. The band invested much time and money into their third album, "Outside The Law" (1974), and aimed at an international break-through. On this album, McGillivray was replaced with Achim Wielert (drums, percussion). The music sounded more polished this time, as the band abandoned progressive elements for a more straight forward heavy rock style.
Recorded in November 1973 at the Omega studios in Chicago, Outside the Law is undoubtedly still the definitive Epitaph album. The sound engineer was Dave "Grape" Purple, who won the 1971 Grammy for Best Engineered Recording on Isaac Hayes' Theme from Shaft. The recording of Outside the Law was completed in just 5 days, with very few overdubs, and the final mix was done by Ed Cody at the United Technique studio on Chicago's South Side...cdn

So how does a German rock band get to be recorded by studios and engineers who built their reputations on black music - and produce such a brilliant album? In early summer 1972, Epitaph did a mind-blowing rock festival gig at Berlin's Waldbühne stadium. Also present that day was Gary Pollack, head of Billingsgate Records, who stopped Cliff Jackson on the way to the dressing room with the announcement that "in six weeks you guys will be doing a US tour". Knowing that no German rock bands had ever toured or recorded in the USA before, Cliff and the guys were somewhat sceptical about the project. But sure enough, Epitaph landed at Chicago's O'Hare Airport in August 1972 for a successful twenty-day tour. Returning on a cloud of euphoria to the band residence near Visselhovede in northern Germany (plenty of poets, painters, animals, and ladies, but no heating, no bath, and only an outside toilet) work commenced on a new album. The demo was recorded two months later at the Windrose Studio in Hamburg and then sent over to Gary Pollack, who invited the band to come back to Chicago to do the full recording of Outside the Law.
While Billingsgate was preparing the release of the album, Epitaph spent their time gigging around the Chicago area.
It was around this time that Irving Azoff, then managing Joe Walsh, wanted to take Epitaph under his wing. The band met up with him for two days to try and work out a deal, but the German manager they already had developed some seriously cold feet. Bearing in mind that their manager, Werner Kuhls, did not speak a word of English, it was hard to comprehend just which of Azoff's propositions he was objecting to. The net result was that Epitaph couldn't get out of the contract with Kuhls, and Kuhls was dreaming of hitting the big time. Ordered back to Germany for a Europe-wide tour, it was soon clear that Kuhls was no Azoff. The tour turned out to be fronting for Status Quo, and one festival gig. Azoff went on to represent such artists as The Eagles, Jewel, Van Halen, Neil Diamond, Steely Dan, Guns N' Roses, and Christina Aguilera, to name but a few. Werner Kuhls went on to be a concert promoter and publisher of the German version of Rolling Stone. Now without a manager, Epitaph hoped for success with Billingsgate.
When they returned to the US for their third tour in late 1974, it soon became clear that despite excellent sales of the album, Billingsgate was in dire straits and unable to finance a proper promotional tour. Two months of sporadic gigs later, the guys returned to Germany.
Sadly all their dreams of success were brutally shattered, as Billingsgate soon went bankrupt and all their money was lost. Epitaph had laid out on an extensive (and expensive) USA promotional tour (with ex-Karthago member Norbert Lehmann on drums) in October 1974 - on their return they had to sell their gear to survive! Their new album was part of the bankrupt estate of Billingsgate, and Epitaph were forced to disband in 1975. The band secretly reformed later the same year, but didn't record any further albums until 1979......