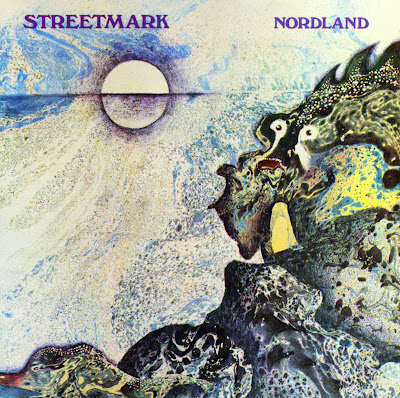 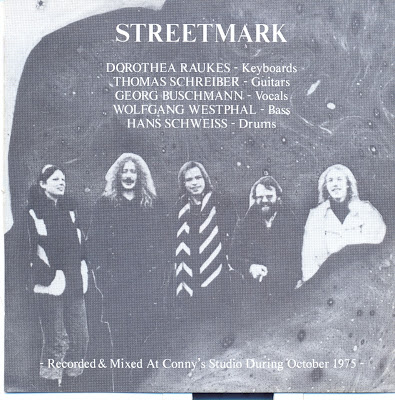 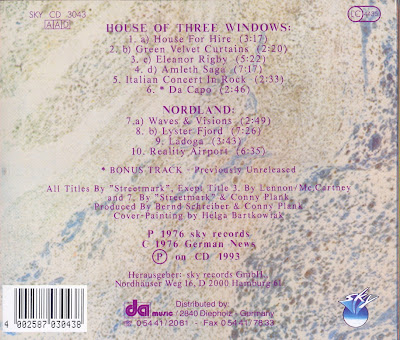 Follow biography in english to help the international surfers

STREETMARK was founded 1968 in Düsseldorf, when Dorothea Raukes, who had studied Classical Music and played keyboards, met the Brothers Thomas and Bernd Schreiber, both guitarists. Dorothea and Thomas formed the nucleus of the band. In the beginning STREETMARK played mainly covers of the BEATLES, Jon Mayall and DEEP PURPLE. In 1969 they refused a proposal for a record deal. In the following five years STREETMARK developed their own style mainly based on the compositions of Dorothea and Thomas, influenced by PROCOL HARUM, FOCUS and ELP. Finally in 1975 STREETMARK recorded their debut record "Nordland" for Sky. The record was produced and recorded by Connie Plank with the following line up : Dorothea Raukes (keyboards), Thomas Schreiber (guitar), Hans Schweiss (drums), Georg Buschmann (vocals), Wolfgang Westphal (bass). Bernd Schreiber did the mixing and Soundboard duties.

"Nordland" was a brillant debut record, the band had taken the time to play the compositions live and to work them out. The general musicianship is quite high; the only weak point, as often in German bands are the English vocals. In 1977 STREETMARK released their second record "Eileen" with Wolfgang Riechmann, a solo recording artist, who had joined the band on vocals and keyboards. Tragically he was murdered in 1978, before the release of his solo record "Wunderbar". Sky re-released "Eileen" in 1979 with the new title "Wolfgang Riechmann and Streetmark" with one bonus track. Later on the record was renamed "Dreams". The third (fourth) record "Dry", entirely instrumental, was released in 1979. In 1981 STREETMARK released their last record "Sky Racer", with Dorothea Raukes as the only founding member left. It is still an interesting record but much more Pop influenced.

"Nordland" and "Eileen" are highly recommended.