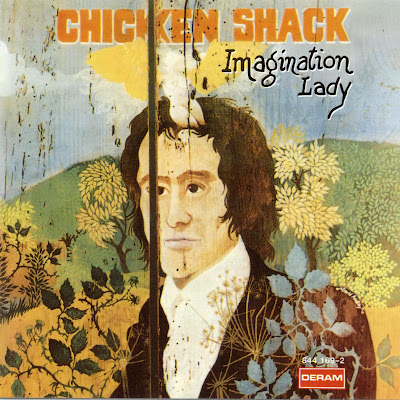 This album is a classic of the hard / blues and can not miss the collection of a rocker who is said
Founded by guitarist / vocalist Stan Webb still continues on the road
But this album is wonderful, with all music should be heard with all affection
Highlighting songs, I'll just highlight Going Down, but listen to a one and you will see your soul fly


Between the mid-60's and early 70's, many of the blues band formed in the UK, such as Savoy Brown, Fleetwood Mac and John Mayall's Bluebreakers, Chicken Shack was one of them....
Stan Webb, born in Fulham, south-west London February 3, 1946 in a modest family is the man without whom Chicken Shack never moved, sometimes against all odds and has been since the mid-60s.


This is the natural leader and iconic, like Kim Simmonds with Savoy Brown;In his youth, he moved to Blakedown in Worcestershire, and finally settled near Kidderminster.
It was only when he heard Barney Kessel play guitar on a disc of Oscar Peterson that he decided to take up the guitar.


Thus, it is in Kidderminster in Worcestershire that Stan brought together his first band, The Blue Four.
His first real band called Sons of Blue was established in 1964, a young band including the pianist Christine Perfect (born July 12, 1943), bassist Andy Silvester (born June 16, 1947 in Kidderminster, flutist, saxophonist Chris Wood (later a member of Traffic), and singer David 'Rowdy' Yates.


The group only lasted a year before Christine and David did make the trip to London, she become a model for him and to work on the business side of the recording industry. Stan and Andy then form a trio with drummer Alan Morley and will test their endurance in Germany, in Hamburg. This line-up pays the tribe almost mandatory to Rock (five hours together at the Star Club) for two years before returning to the Midlands in 1967.


Nevertheless, in early 1965 Stan sets up the first incarnation of Chicken Shack bassist Andy Silvester with a succession of drummers and starting with Alan Morley, Al Sykes, Hughie Flint and finally Dave Bidwell. Legend has it that the band's name comes from the barn belonging to the parents of Andy in which they repeated. In early 1967, Andy contacted Christine and suggested he join them. They send a tape to Mike Vernon, but because the quality is not brilliant, he comes to see directly into the Midlands during the Seventh National Jazz & Blues Festival. 1967 was a good year for British Blues, held mainly by the Seventh National Jazz & Blues Festival, which this year took place from August 11 to 13 at the Royal Windsor Racecourse. Yet not only Eric Clapton left John Mayall to form Cream, but his successor, Peter Green, had also taken off by creating Fleetwood Mac, Bob Brunning on bass because John McVie could not give quite the Bluesbreakers . There were two scenes in Windsor, the main structure was an open-air a little run down, the other inside a tent. Fleetwood Mac had its place on the main stage, and Chicken Shack on his debut. The group won a great success. The formation of Fleetwood Mac was Mike Vernon also provided the impetus to create the Blue Horizon label, until then a secondary activity by post, in a society completely separate disk distributed by CBS.


After Mike's trip to Kidderminster, Chicken Shack became the second major signing of the label.
Chicken Shack published in 1972 on Dram (the label ... Savoy Brown!) What an incredible album "Imagination Lady".


On the cover of the album, the "Lady Fantasy" comes out of the head of Webb is none other than Christine Perfect.
True echo the first two Led Zeppelin and Cactus first, the music of this album is sip of wah-wah, thick bass and drums fury.


We finally discovered the enormous capacity of the Webb game, both in improvisation and in the manic-rock riffs that explode into the open.
His playing wah-wah is a revelation.
Webb stands out as the master of a language that new Blues Rock, hitherto, only Peter Green was able to interpret in his moments of madness.


"Imagination Lady" (Deram, April 1972) was Webb and company's fifth studio set,the predominant sound remained standard English blues-rock, but this time around there was a distinctive rock feel to tracks such as the opener 'Crying Won't Help You Now' and 'their cover of Don Nix's 'Going Down.  Elsewhere, 'Daughter of the Hillside' sounds like a top-notch Cream outtake, while the Webb-penned closer 'The Loser' almost qualifies as a piece of top-40 pop.  Webb's a surprisingly good singer and a vastly overlooked guitarist - check out the band's vamped up cover of Tim Hardin's 'If I Were a Carpenter'.  The only real disappointment comes in the form of a needless and seemingly endless Hancox drum solo on the 11 minute plus 'Telling Your Fortune'.  That said, the band's blues-oriented fans aren't particularly fond of this set, but precisely because it's more diverse and openly commercial, I'd give it the nod.


British guitarist Stan Webb is one of those great players who somehow has slipped through the cracks in the guitar hero pantheon. Perhaps he's been overshadowed by the "Holy Trinity" of British axemen-Clapton, Beck & Page. One need only to listen to the searing Hendrixian solo on "Poor Boy" (contained on this album)to see exactly what I'm talking about. "Imagination Lady" is Chicken Shack's strongest studio album, as it's the first to fully showcase Webb's talents (Christine McVie had left at this point, removing any folk or pop influences that she may have brought to the band's sound.)This is a powerful blues-rock set comparable to "Led Zeppelin II". A couple slow blues numbers foreshadow the style Webb later brought to Savoy Brown, when he joined them for the "Boogie Brothers" album. The cover songs are well done, especially the oft-covered "Goin' Down"--with Webb giving Jeff Beck a run for his money with his heavier, almost metal version.A must for guitar afficiandos.


Much in the same tradition as the great British bluesmen Alexis Corner and John Mayall, Webb's revolving-door personnel landed the band several notable members, including: John Almond (tenor/alto sax), Hughie Flint (drums), and Christine Perfect (keyboards/vocals). For this album, Webb (guitar/vocals) gathered a trio consisting of himself, future Gods and Jethro Tull member John Glascock (bass), and Paul Hancox (drums). Enthusiasts of the more traditional 40 Blue Fingers, Freshly Packed and Ready to Serve and OK Ken albums have been quick to dismiss the latter-era band, often citing the whole over amplified power metal trip as detracting from their blues origins. While certainly valid assessments, the power trio featured on Imagination Lady brings more than sheer volume to this release. As with the previous Chicken Shack long-players, this disc features several Webb originals augmented with some well-chosen cover tunes. The album opens with a ferocious cover of B.B. King's "Crying Won't Help You." This version is highlighted by Glascock's thrashing basslines and Webb's wah-wah driven lead guitar and gin-soaked vocals. In a style akin to the Faces or even some of the rowdier moments from the Peter Green-led Fleetwood Mac, this trio grinds out the blues with a decidedly English edge. The folkie "If I Were a Carpenter" is speared with searing electric guitar leads that rip throughout the likewise spirited contributions from Glascock and Hancox. The tune is also afforded an unexpected sensitivity that contrasts well between the all-out sonic onslaught of the chorus and the restrained polyrhythms of the verses. In regards to original material, "Daughter of the Hillside" is without a doubt Webb's most impressive contribution to the album. It is arguably the strongest side on the disc. This straight-ahead rocker is an ideal trio effort with equal contributions from all three recalling the intense instrumentality of Cream or early Led Zeppelin. With so much potential, it's unfortunate that the 11-minute epic "Telling Your Fortune" -- which is nothing more than a 12-bar blues platform for solos from Webb and Hancox -- is so erratic. In an ironic contrast, the closing number "The Loser" is upbeat and almost pop-oriented, again displaying the immense strength of this short-lived incarnation of Chicken Shack.


His compositions, marked by great suffering, as also his chorus, show a clear human face bad luck that seems to continue.
The last song is called "The Loser" and sings "I'm a loser, and I Always Will."


Prophetic? nothing is certain ... There is some evidence that this training had lasted one year before the new changes.
Chicken Shack is finally overwhelmed by the arrival of the wave Hard Rock and Progressive Rock.


Despite this record fabulous, it is shunned by the hype, more attracted to the glam and delusions-symphonic progressive. The group broke up and join fellow Webb Savoy Brown, Kim Simmonds of the group about to explode in the United States with a more Boogie, because some of its members are parties based Foghat.


In fact, it will never return to the top of the poster, and Webb will now hang up his guitar in pubs clubs and play his Blues for a handful of insiders.