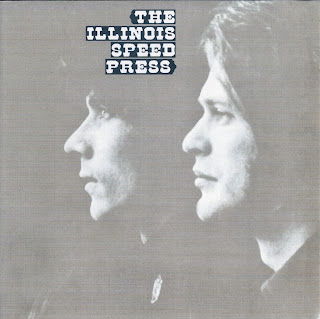 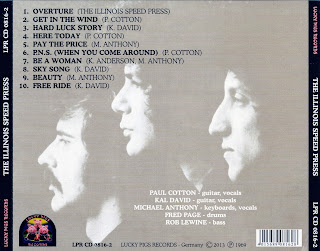 Illinois Speed Press was a Chicago-spawned band whose sound combined elements of R&B and country music in a powerful double-lead-guitar attack. It was enough to turn them into stars in Chicago, get them a contract with a major label, and a move to Los Angeles, paving the way for longtime careers for their two guitarists.

Though the Illinois Speed Press was a late-'60s phenomenon in Chicago, their roots went back a full decade, traceable to a late-'50s band called "the Capitols" (no relation to the soul outfit of that name), who played local high school functions and the YMCA. They began a series of name changes — some voluntary and some imposed by outside forces — in the early '60s, most of which reflected the changing musical sensibilities of the era. The first came in 1961, to the Mus Twangs (or Mus-Twangs), according to Linda Amicarelli in a 1997 article for the Alabama Music Hall of Fame.

As their name hinted, they were primarily an instrumental outfit, and cut a surf-style instrumental version of Irving Berlin's "Marie" (backed with a piece called "Roch Lomond") on the local Nero label that was good enough to attract the attention of the Chicago-based Mercury Records, which picked it up for national distribution on the company's Smash Records subsidiary.

That record didn't get very far in terms of securing the band's future, and in the wake of the British Invasion, the appeal of instrumental bands waned quickly, and by 1964, the group had added more vocals and transformed themselves into "the Gentrys" with a repertory that encompassed the Beatles and the Righteous Brothers, among other top contemporary acts.

They didn't keep that name very long, however, as a Memphis-based band had a prior claim on that moniker, and by late 1964 they'd become the Rovin' Kind. It was at this point that the personnel began to solidify around two or three key members: Alabama-born guitarist/singer Paul Cotton, who'd been with the outfit since 1959, and had come to music as an admirer of Les Paul, Scotty Moore, Duane Eddy, and James Burton; and Kal David, a Chicago-born guitarist/singer whose influences were blues and R&B, and who had previously played with a band called the Exceptions (whose ranks included Peter Cetera, later of Chicago, and future Buckinghams member Marty Grebb), which had recorded briefly for Vee Jay Records.

Between Cotton and David, the group generated a powerful and distinctive guitar-based rock & roll, and they were good enough to record several singles for Dunwich Records — the other members were Mike Anthony on keyboards and vocals, who also wrote some of their songs,Keith Anderson on bass (later succeeded by Rob Lewine), and Fred Page on the drums.

But it was Cotton and David who were the main source of attention from listeners with their double-lead guitar configuration. None of the group's singles performed spectacularly, but the Rovin' Kind themselves were something else, again — they were good enough to win a regional battle-of-the-bands contest against some 80 rivals and, for their reward, got flown to L.A., where they were featured on American Bandstand, miming a pair of songs, and also got to do a club performance in San Francisco.

That exposure was great, but it was back home where their work suddenly began to pay off when, at a performance at the Chicago Whiskey-A-Go-Go, they were seen by producer James William Guercio, who signed them up and got them a contract with Columbia Records' Epic label under their new name, Illinois Speed Press. The band's sound was guitar-based, and a mix of rock & roll, soul, and country, reflecting the divergent tastes of the members.

They subsequently moved to Los Angeles, where they worked for a time as the house band at the Whiskey-A-Go-Go, and also opened for acts such as Steppenwolf and Chicago(which was also produced by Guercio). And among the up-and-coming groups that they played with in 1969 and 1970 was the country-rock outfit Poco.

The band's self-titled debut album favored David's R&B orientation, though it had several Cotton songs (one of which, "Get in the Wind," would be completely reinterpreted by Poco) and some country elements. It was well received critically, but didn't make too much of an impression on the charts; their second album, Duet, which was much more country-oriented, was released in 1970, by which time the group had seemingly run its course. Illinois Speed Press split up that year, owing to Cotton's andDavid's differing musical directions: David wanted to create more of an R&B-based sound and headed for San Francisco where, in conjunction with former Electric Flag bassist Harvey Brooks, he formed the Fabulous Rhinestones, who went on to record in their own right as well as perform on-stage with such luminaries as John Lennon and Yoko Ono.

Cotton stayed in Los Angeles, where he was approached by Richie Furay, the co-founder of Poco, who remembered him from his Illinois Speed Press performances on the same bill with his band; he was asked to audition as the possible replacement for co-founder Jim Messina, who was planning to leave the band. Cotton won the spot and has been with the band ever since, right into the 21st century.
(Biography by Brude Eder) 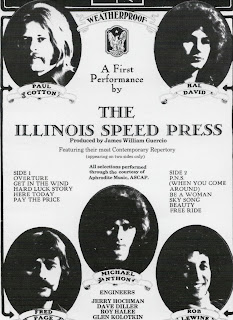 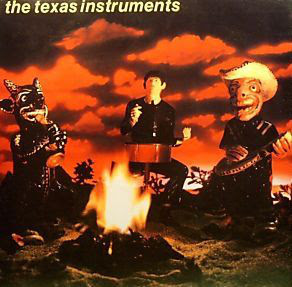 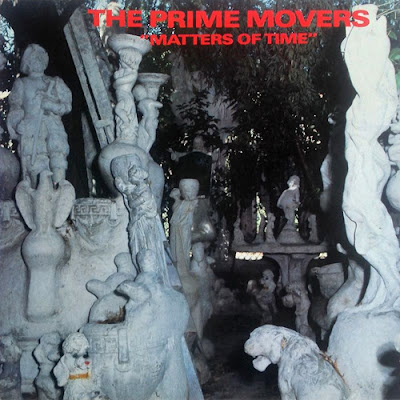